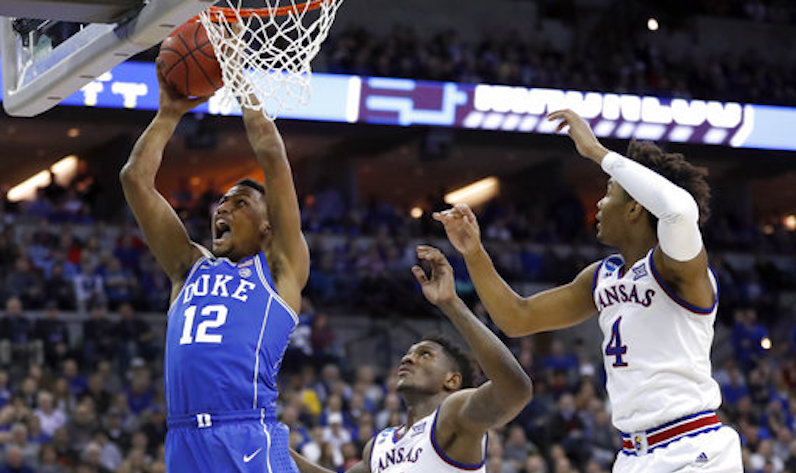 Duke's Javin DeLaurier (12) heads to the basket as Kansas' Silvio De Sousa (22) and Devonte' Graham (4) defend during the second half of a regional final game in the NCAA men's college basketball tournament Sunday, March 25, 2018, in Omaha, Neb. (AP Photo/Nati Harnik)

Jack White was already set to be back at Duke for his senior season; however, both of Duke’s captains from the 2018-19 season will return for the Blue Devils. It was announced that Javin DeLaurier, after going through the NBA Draft process, has decided to come back for his senior year.

Javin DeLaurier WILL RETURN to Duke next season. No surprise, but will be great to have back to provide front court experience.

As a junior, DeLaurier played in all 38 games for Duke — making 16 starts, while sharing the center position with Marques Bolden. DeLaurier averaged 3.8 points (74.7 eFG%), 4.4 rebounds and 1.3 blocks per game this season.

On offense, he plays a simple but effective role: screen hard, dive to the rim and hit the glass (11.2 percent offensive rebound rate). He finished the season with 28 dunks, having shot 79 percent at the rim.

With Bolden’s decision to head pro, this means Duke brings back one half of its center platoon from the 2018-19 season. DeLaurier has a real chance to have an impact defensively for a unit that should be headlined by Tre Jones.

DeLaurier is a steals and blocks guy, too. Last season, he averaged 3.2 blocks and 2.1 steals per 40 minutes.

While Coach K usually rolls with a tighter rotation, the Blue Devils, in theory at least, should have decent depth next season. As for DeLaurier: Duke has 80 minutes per game to split amongst its power forwards and centers. DeLaurier will clearly factor into that equation along with 5-star recruits Hurt and Carey Jr.

White has the ability to vacillate between positions and guard multiple spots on the floor, which opens things up a bit, too.

With Tre Jones, the ACC looks to be loaded at point guard in 2020