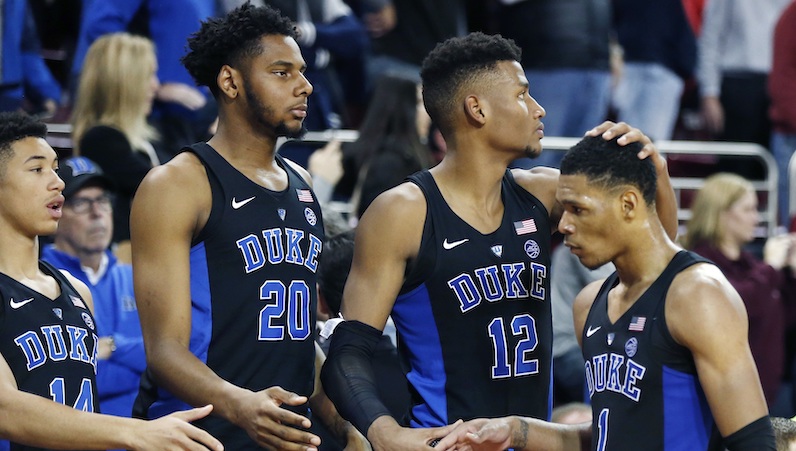 Duke's Jordan Goldwire (14), Marques Bolden (20) and Javin DeLaurier (12) meet Trevon Duval (1) as he comes off the court during the second half of an NCAA college basketball game against Boston College in Boston, Saturday, Dec. 9, 2017. Boston College won 89-84. (AP Photo/Michael Dwyer)

On Monday morning, Duke Basketball announced that two rising senior frontcourt players — Marques Bolden and Javin DeLaurier — will test the 2019 NBA Draft waters. Both players will go through the process and gather feedback; the door to return to Duke remains open for both, too.

NEWS: Javin DeLaurier & Marques Bolden will enter the NBA Draft process. The rising seniors will gather feedback from NBA personnel over the coming weeks, but will maintain their collegiate eligibility, leaving open the possibility of returning to Duke. pic.twitter.com/rtNhUrWLNg

Sunday night marked the deadline for players to declare for the draft. Along with Zion Williamson, Cam Reddish and RJ Barrett — but not Tre Jones — Duke has five players who declared for the 2019 NBA Draft.

Bolden played in 35 games this season — making 21 starts at center — and playing 19 minutes per game. While shooting 58 percent from the field (62.2 TS%), Bolden averaged a career-high 5.3 points per game, which went along with 4.5 rebounds and 1.7 blocks.

A low-usage player (13 percent usage rate), Bolden doesn’t do much in the way of scoring or passing (35 career assists in nearly 1,200 minutes of action). However, he’s emerged as a powerful, versatile defender, an efficient source of paint offense (34 dunks, 71.1 FG% at the rim) and an industrious rebounder (11.2 percent offensive rebound rate).

As a prospect, it starts with Bolden’s defense; he’s made tremendous strides since his arrival in Durham. Bolden blocked 3.5 shots per 40 minutes this season, which is a big number (8.5 percent block rate). According to KenPom, Bolden ranked inside the top 50 nationally in block rate. (Bolden also bagged 19 steals this season, too, which is solid.)

With Bolden, though, it’s not just the rim protection — at least not anymore. At one point it his career, Bolden could be played off the court; if opponents put him in high screen-roll, the big Texan struggled in pick-and-roll coverages. He played upright, unable to get in a stance; and far too often he found himself in no man’s land.

That changed in the 2018-19 season, however. At times, Duke utilized a switch-all defensive scheme, which had Bolden switched on smaller perimeter players. For the most part, he played well, too. His growth in this capacity is profound.

Going forward, whenever his college career ends, this is what he will hang his hat on as his tries to craft his professional career. If the 6-foot-11 Bolden continues to show his ability to switch and protect the rim, he can find a role as a defensive 5 in the switch-happy NBA.

DeLaurier, the other half of Duke’s center platoon this season, is a lesser prospect than Bolden; however, the thought process remains the same. This process is a win-win scenario for players, including the defensive-minded DeLaurier.

As a junior, DeLaurier played in all 38 games for Duke — making 16 starts. DeLaurier averaged 3.8 points (74.7 eFG%), 4.4 rebounds and 1.3 blocks per game this season. He plays a simple but effective role on offense: screen hard, dive to the rim and hit the glass (11.2 percent offensive rebound rate). He finished the season with 28 dunks, having shot 79 percent at the rim.

On the defensive end up the floor, DeLaurier has intriguing upside, which I’ve detailed before — on numerous occasions. In terms of stocks (steals and blocks), DeLaurier was impressive this season: 3.2 blocks and 2.1 steals per 40 minutes.

DeLaurier needs to add weight, improve his spatial awareness of defense and his hand placement; far too often the 6-foot-10 defender plays on-ball with low hands. However, he, too, offers switch potential; in theory, he should be able to guard most positions.

The rim protection of Duke Basketball