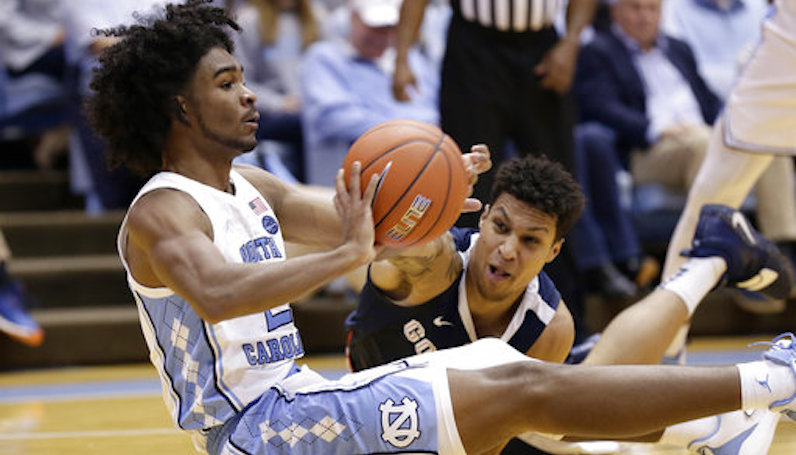 North Carolina is coming off its best win of the 2018-19 season. The 103-90 win over Gonzaga wasn’t a spotless performance for the Tar Heels, but UNC — outside of some head-scratching turnovers — looked close to dominant. This was the type of game we’ve waited to see from North Carolina all season. In two other big early-season tests, the Heels fell short: Texas scored with ease (1.15 points per possession), and Michigan lit UNC up on both ends of the floor, especially in the second half. (North Carolina’s ball-screen defense really faltered in that game.)

The win in Chapel Hill over the Zags was different, though.

UNC now has three more games before conference plays starts up — all of which come against top-100 KenPom teams, including Kentucky this Saturday. Before that, though, let’s take a quick look at North Carolina’s offensive profile, and the outstanding play of Coby White and Cameron Johnson.

Efficiency vs. Gonzaga – Despite the turnovers

The primetime win over Gonzaga was sloppy, at times, for North Carolina, but the Tar Heels still put together a monster offensive performance. UNC turned the ball over 23 times — good for a turnover rate of 27.4 percent. This was just the ninth time over the last nine seasons that UNC has turned the ball over 20+ times in a game.

Finally healthy this season, Cameron Johnson has put in some incredible work on the offensive end of the floor for UNC. He’s been absolutely lights out shooting the ball. Nearly 49 percent of Johnson’s field goal attempts have been of the three-point variety; that’s a good clip, but it’s actually under his career rate (58.6 percent).

Johnson has made 26-of-53 three-point attempts; he’s one of three current ACC players shooting above 45 percent from above the arc (minimum of 50 3PA), and he leads the ACC in three-point percentage (49.1 3P%). In the win over the Zags, Johnson scored 25 points — the second most in his career (109 games) — and hit six three-pointers. Johnson has made at least one three-ball in every game this season, and has made two or more triples in seven games.

Glad @ACCSports playbooks are back!

And you can see Nassir has been taking advantage at close range, on alley-oops and ORB putbacks

Going back to his time at Pitt, we’ve long known about Johnson’s ability to let it rip off the catch. Now, however, he’s taken it to a new level. Johnson has scored 1.5 points per possession (75 eFG%) on catch-and-shoot attempts this season — good for No. 26 in the nation (minimum 30 possessions), according to Synergy Sports.

His shooting has auxiliary benefits, too. UNC can leverage his off-ball movements and gravity to draw extra help defenders — which, in turn, frees up his teammates for high-percentage looks.

Coby White: The game to match the hair

Outside of Zion Williamson working the assembly line at the Highlight Factory, there may not be a more entertaining player to watch in college hoops this season than Coby White.

There are plenty of reasons why White is quickly climbing NBA Draft boards. White puts all kinds of pressure on opposing defenses with his dribble. His handle is a little loose and high, but his combination of height (6-foot-5) and speed is a dazzling mixture. When White pushes in transition, good things happen for the Heels.

UNC's most common primary break action is "Coby White Go" (White pushing with the dribble). The Heels are scoring 1.24 PPP on those possessions, and White averages 9.9 / 40 minutes. "Seventh Woods Go" is accounting for only 0.73 PPP on 5.0 possessions / 40.

White has the ability to get all of the way to the rim and finish, but the secondary transition game lets him get to another primary skill: his pull-up game. He can go from 0 to 100 and back down to 0 in a blink — stopping on a dime with good balance to hit from the midrange.

Foul-line distance from the hoop on the right side of the floor may be White’s happy place, but he’s unafraid to lift from deep, too. White has attempted 50 three-pointers in 207 minutes of action (9.7 3PA per 40 minutes). The freshman guard has shot the ball well off the catch (67.e FG% in the half court), but he has the special ability to pull from deep off the bounce.

According to The Stepien’s shot tracker tool, White has already hit 12 three-pointers — in nine games — from NBA range (44.4 3P%).

Coby White may not be Luka Doncic (he’s not), but he has a nasty step-back element to his shot-creation game, too. White can change gears and create separation with a little hop-step. This isn’t a bad contest from Kerwin Roach, but White’s still able to rise and shoot over the top.

From that monster 33-point performance against Texas, here he is again. Look how much space White creates with the sideways hop. The ability to separate and create his own shot adds to his appeal as an NBA prospect. The NBA awaits on the horizon but, for right now, he’s the one guy on this UNC squad that can reliably get his own shot. That’s a lot for a freshman guard to handle, but he’s doing it with style.

(I maintain the belief that Nassir Little has some untapped shot generation aspects to his game, but so far that’s lacked. His handle and overall comfort in the half court have looked shaky.)

In the half court, White can be super effective, too. Opponents struggle to stay in front of him in one-on-one matchups; he can use his dribble to create a rhythm and get to his spots. Back to the Texas game: White sees Luke Maye’s defender position himself to the right of the screen — theoretically in a help position. Wisely, White rejects the screen and goes away from it with the help defender out of position. Another help defender slides over, but without breaking stride, White hits him with the Eurostep, and is it at the rim.

Again, his ability to create separation — this time on a drive in the middle of the lane — is pretty special. White isn’t just a straight-line speed missile; there’s some waggle and shake to his game, too. He can also finish through contract.

Obviously, it’s great if he can get all of the way to the rim; that’s where nearly a quarter of his field goal attempts come from, according to The Stepien. It also allows him to collapse defenses, look for shooters (UNC: 1.19 points per possession on spot-ups, per Synergy) and get to the free throw line. White has drawn 5.4 fouls per 40 minutes this season (7 FTA per 40 minutes); nearly nine percent of his possessions have resulted in a shooting foul, per Synergy.

However, White can do damage from the midrange as well. His pull-up game can be effective against a set defense, too. According to Synergy, 41.5 percent (57.3 eFG%) on jump shot attempts in the half court (41 FGA).

A Season of Giving

It didn’t take much time to notice that White has a special flair for splitting ball screens. Early in his career at UNC, it became obvious: he’s willing to take chances with the ball, but has the necessary speed and skill to pull it off. Moves like this create numbers advantages for North Carolina, which leads to easy 4-on-3 scoring opportunities.

We know he can get to the rim or create his own look, but White has been unselfish with the ball. He’s assisted on 26.1 percent of his teammates’ field goals while on the floor this season — good for 3.9 assists per game (6.8 per 40 minutes).

With Coby White driving the pace car, North Carolina is flying up and down the court this season. According to KenPom, the Heels rank inside the top 10 nationally in adjusted tempo and averaged possession length on offense.

Along with Duke and NC State, the ACC has three offenses that averaged under 15 seconds per offensive possession, but UNC is the league’s featured go-go offense, at the moment.

UNC has played six games at 80 possessions or better. That matches the past two seasons combined.

As North Carolina transitions from exams and the holiday season to ACC play, there are certainly things to work on, especially on the defensive end. However, Roy Williams has a stud at point guard — someone to help replace the playmaking of Theo Pinson — and an ace shooter. This team can play fast and efficient.

Plus, Kenny Williams and Luke Maye have both struggled with their shot this season; at some point those two could heat up, which would be big.

The presence of Little looms as well. This is one of the most talented basketball players in college hoops. As he gains comfort in North Carolina’s system, is there another gear for him as well? That development will be a key differentiator for UNC as the season progresses.

UNC lands at No. 9 in AP Poll after win over Gonzaga