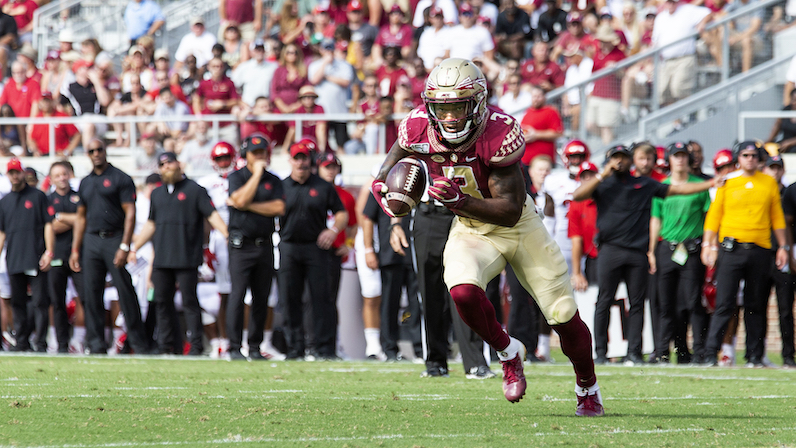 Florida State running back Cam Akers (3) heads toward the goal line in the first half of an NCAA college football game against Louisville in Tallahassee, Fla., Saturday, Sept. 21, 2019.

Prior to the start of the 2019 season, it was wise to project Clemson’s Travis Etienne as the top running back prospect in the ACC. Etienne, with all of the speed in the world, put together a masterful sophomore campaign as Clemson went 15-0 and won the national title: 1,658 rushing yards and an ACC-record 24 rushing touchdowns.

As a junior, Etienne followed that performance with another ridiculous effort. Etienne again eclipsed 1,600 rushing yards; he accounted for 23 total touchdowns, including four receiving scores. Etienne posted eight 100-yard rushing performances, all with 17 or fewer carries.

For the second year in a row, Etienne was named ACC Player of the Year. Etienne, however, decided to return for his senior season, as opposed to entering the 2020 NFL Draft.

Even with Etienne staying put, the ACC will still send a couple talented running backs to the draft. Even as the running back position struggles to find its value of yesteryear, Florida State’s Cam Akers and AJ Dillon of Boston College loom as interesting sleeper draft picks. (Akers and Dillon were both in the 2017 recruiting class with Etienne, too.)

Akers, a former blue-chip recruit, followed up a slump-filled sophomore season — behind a historically leaky offensive line — with a resurgent 2019 campaign. Despite the team struggles, Akers still fulfilled his prophecy as the next great FSU running back after Dalvin Cook.

During his junior season, Akers ran for 1,144 yards (5 yards per carry) and 14 touchdowns. The 5-foot-10 Akers, who ran a 4.47 40 at the combine, showcased the ability to run between the tackles — 217 pounds, 20 bench press reps at the combine — and breakaway from the pack with highlight speed.

As a receiver, Akers caught 69 career passes, including 30 this season for 225 yards and four touchdowns.

Projection: Akers is arguably the best running back prospect in this year’s class; he looks like a Day 2 pick, going somewhere in the middle of the second round.

At the top of the SPARQ listed for running backs (97th percentile), though, is Dillon — a bulldozer of a runner.

With Steve Addazio at the helm, few FBS players went through more churn than Dillon over the last couple of college football seasons. This trend started during Dillon’s freshman season, when he carried the ball 300 times for 1,589 yards and 14 touchdowns.

Dillon missed a couple of games his sophomore season with an ankle injury; however, he still managed to rush for over 1,100 yards on 227 carries. In 2018, Dillon led the ACC with 22.7 carries per game.

Dillon is enormous for a running back; at this year’s combine, the 6-foot back weighed in a 247 pounds. Dillon also displayed an impressive 41-inch vertical leap and put up 23 bench press reps.

He may be a situational running back, but Dillon offers value as a short-distance/power rusher — at the least. It’s easy to see him running through defenders around the goal line, or showing off that vertical leap on 1-yard touchdown plunges.

Projection: Dillon appears to be a Day 3 pick, going in the fourth or fifth round.