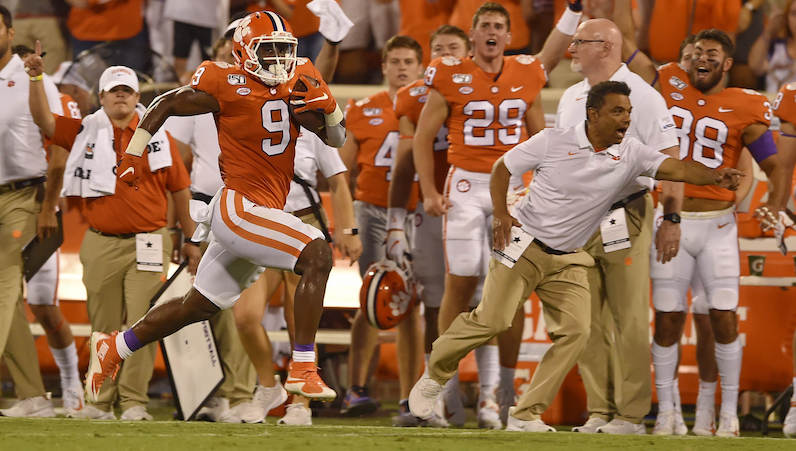 Clemson's Travis Etienne runs down the sideline for a 90-yard touchdown during the first half of an NCAA college football game against Georgia Tech Thursday, Aug. 29, 2019, in Clemson, S.C. (AP Photo/Richard Shiro)

It feels like that Miami-Florida game was a month ago, but now all 14 ACC Football teams have played one game. Behind Clemson, there’s a lot of clutter in this week’s ACC Football Power Rankings, especially in the Nos. 4-11 range. And it’s a challenge to not overreact to a bunch of one-game samples, while also factoring in preseason expectations, too. There’s still lots of football left to be played, and plenty will change over the next three months.

Quarterback Trevor Lawrence looked a little iffy (56.5 percent completion rate, two interceptions) in his 2019 season debut; although he did connect with Tee Higgins for some damage against Georgia Tech — four catches, 98 yards and 62-yard touchdown.

Higgins now has 15 career touchdown receptions, including six over his last five games.

Obviously, the star of the night was none other than All-ACC running back Travis Etienne. The junior back from Louisiana ran for a career-high 205 yards.

Travis Etienne got some fantastic blocking on the way to an excellent game for Clemson. pic.twitter.com/NHfS4gYNTO

Early in the game, Etienne lit up the crowd and torched Georgia Tech’s defense with a 90-yard touchdown run — which tied a school record. The play, a misdirection counter draw, is something out of Jim Grobe’s old playbook at Wake Forest.

Up Next: Texas A&M

It wasn’t exactly pretty, but Syracuse got the job done on the road at Liberty — a bizarre game in a bizarre place. Tommy DeVito completed 48.6 percent of his passes and tossed two interceptions; Syracuse also committed 10 penalties. That said, star safety Andre Cisco was up to his old trick, picking up from where he left off during his freshman season..

Here’s the Andre Cisco interception, the eighth of his #Syracuse career after a nation-leading seven as a freshman.

Great read of the play from Cisco’s deep safety position to jump this one. pic.twitter.com/Ci1bNdRdFi

However, nothing will top the absurdity of Liberty head coach Hugh Freeze — due to a back injury — coaching this game from a hospital bed. Oooooookay. Seriously: how’s this not a photoshop?

Up Next: at Maryland

(Quick note: After these first three teams, this is where things become more muddled, difficult to assess. There are just so many teams bunched on top of one another — without much data to work on, yet.)

Virginia exited the locker room down one on the road at Pitt; however, the Cavaliers scored 17 unanswered points in the second half, and picked up a key 30-14 Coastal Division victory at The Big Ketchup Bottle.

It was a busy game for Bryce Perkins, too, who ran 18 times for 44 yards, officially. Perkins also threw for 181 yards (5.3 yards per attempt) and two touchdowns. Virginia’s skill position guys made some plays as well, including Joe Reed’s early-season attempt at Catch of the Year in the ACC.

On defense, Virginia sacked Kenny Pickett four times and picked off two of his passes. Defensive back Joey Blount accounted for two of those sacks, too.

Here is the ACC Team of the Week for Week 1 on defense! pic.twitter.com/hoTZFEc8UQ

Up Next: William & Mary (Friday)

Miami had plenty of opportunities during its Week Zero matchup with No. 8 Florida, but fell just short. On defense, the Hurricanes forced four turnovers — including two interceptions of Feleipe Franks. And quarterback Jarren Williams, in his first career start, went 19-0f-29 (65.5 percent) for 214 yards (7.4 yards per attempt), one touchdown and no interceptions.

However, Miami committed 14 penalties — tied for the most in the FBS — for 125 penalty yards. Miami also allowed 10 sacks, which was also the worst figure in the FBS, so far this season.

With North Carolina looking like a more of a challenge on the road, Miami must have far better attention to detail in Chapel Hill.

Up Next: at North Carolina

It was a wild one on Friday night in Winston-Salem — Wake Forest racked up 579 yards of total offense and won a shootout over Utah State, 38-35. It was a big game for Jamie Newman, who justified Dave Clawson’s decision to keep him as Wake’s starter in 2019: 401 passing yards (8.5 yards per attempt), three touchdown through the air and a rushing score, too.

Jordan Love & Jamie Newman are first QBs to both throw for 400+ in same game since Dungey/Finley in Week 9 of last year.

Obvoius note: Wake Forest’s receivers, even after the departure of Greg Dortch, are pretty darn good. Clawson has some interesting offensive components, again.

Up Next: at Rice

Here is the ACC Team of the Week for Week 1 on offense! pic.twitter.com/WqVXZhs9ir

For his efforts, Hunter Long — Tommy Sweeney’s replacement — was named this week’s top tight end in the ACC, per Pro Football Focus.

Quarterback Matt McKay was pretty darn good in his first career start: 308 passing yards (67.6 percent completion rate) and three touchdowns — one passing, two more rushing. As NC State won with relative ease over ECU, 34-6, McKay joined Oklahoma’s Jalen Hurts as the only FBS quarterbacks to throw for at least 300 yards — without an interception — and run for two or more touchdowns, too.

ECU turned the ball over twice and was held under 270 total yards of offense.

Up Next: Western Carolina

At one point — earlier in the second quarter — Florida State led 24-6 over Boise State. Everything looked good; the new offense, with Jame Blackman back at quarterback, clicked. Cam Akers got in the early action, too, rushing for a 38-yard touchdown to open this season’s scoring. All of that was quite promising.

However, things took a turn for the worse. That’s putting things mildly, too. Boise State raced back into the game, outscoring FSU 30-7 over the games final 40 minutes. Once again, Florida State struggled to protect Blackman, who was sacked four times, though he did manage to throw for 327 yards, three touchdowns and no interceptions.

Taggart says after seeing his team in the heat during the Boise game, he talked to the training staff about how the team needs to begin hydrating for the game earlier in the week.

Defensively, Florida State was carved up. The Seminoles allowed 621 total yards — a bottom three number in the FBS this week — including 407 through the air.

Devoid of proper context, Virginia Tech put up some fairly gaudy passing stats at Boston College; Ryan Willis threw for 344 yards and four touchdowns. Five different Hokies caught at least four passes in this game, too. In a vacuum, that all sounds pretty good.

Unfortunately, without Damon Hazelton Jr., Virginia Tech’s offense had all kinds of issues. The Hokies turned the ball over five times. Also, it’s a real challenge to win a game if the offense starts out this sluggishly.

Damn VT went 3&out or worse on 6 of its first 8 drives. damn

Up Next: Old Dominion

Both of Howell’s touchdown passes came in the fourth quarter as North Carolina erased an 11-point deficit to win 24-20. On both connections, Howell received excellent efforts from both Dyami Brown and Beau Corrales.

Out of the backfield, Javonte Williams was outstanding, too: 102 yards on the ground (5.7 yards per carry).

The Panthers had some good moments in the home loss against Virginia; however, Pitt needed more out of its offense, which averaged 3.7 yards per play — the lowest in the ACC last week. Quarterback Kenny Pickett threw two interceptions and averaged just 4.5 yards per attempt.

Without Qadree Ollison and Darrin Hall in the backfield, Pitt ran for a measly 78 yards against UVA — the lowest total in the ACC — and averaged only 2.6 yards per carry. As Pat Narduzzi stated after the game, issues with field position didn’t help, either.

They almost covered! At the end of the day against Alabama (42-3), that’s about the best you could hope for if you’re a Blue Devils fans. Duke’s defense had some strong possessions, before Alabama’s speed, size and skill took over.

The better part about Jerry Jeudy’s latest TD (besides the ridiculously smooth moves by Jeudy) – peep the downfield blocking by Jaylen Waddle and Henry Ruggs pic.twitter.com/tF1PjcyHJL

On the other hand, Duke’s offense, predictably, struggled against Alabama. Quentin Harris was one of just two FBS quarterbacks last week to attempt at least 20 passes and throw for under 100 yards passing. The only other quarterback to hit those lowly benchmarks was Vanderbilt’s Riley Neal, who struggled — unsurprisingly — against Georgia, another defensive power.

Despite to loss to Notre Dame, Louisville fans should be mostly happy. Notre Dame entered Monday night as a 20-point favorite; however, Louisville kept this thing competitive until late in the fourth quarter. In fact, this game — if not for a bizarre series of events just before halftime — could’ve been tied after 30 minutes of play.

More than what the scoreboard said, though, Louisville fought and played hard in this game. The effort level is encouraging.

ACC coaches are well aware of Scott Satterfield and all his accomplishments at App State. A few told me to keep an eye on them this year. Far better coached team, played hard. There are issues to fix but they're nowhere near the pushover they were last year. Will be fun 2 watch.

Jawon Pass struggled, but Louisville was able to run the ball: 249 yards and two touchdown on 47 carries (5.3 yards per carry). That’s good work against Notre Dame, which projects to have a top-10 defense.

Up Next: Eastern Kentucky

Similar to Louisville, Georgia Tech also had some nice moments against a powerful opponent. The Yellow Jackets lost by 38 points to Clemson, which doesn’t exactly sound like a close game. But for Geoff Collins, Georgia Tech still did some good things — and made Trevor Lawrence look as uncomfortable as he has in a long time. Really, there’s only so much you can do against the likes of Travis Etienne and Tee Higgins.

Up Next: South Florida

With Phil Longo as OC, Michael Carter set for big 2019 season at UNC