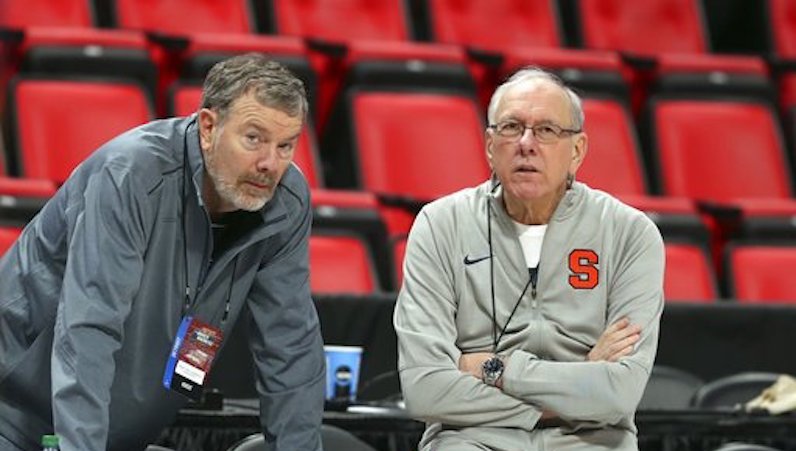 Frank Anselem will head to Syracuse. On Tuesday, Jim Boeheim’s 2020 recruiting class increased by 50 percent — with a commitment from Anselem.

Anselem, a 4-star center from Georgia, is the third member of Syracuse’s incoming rookie class; he will join 4-star wing Kadary Richmond and 3-star forward Woody Newtom. Syracuse also added former Illinois wing Alan Griffin — one of the top 3-point artisans in the portal this offseason.

2020 four-star forward Frank Anselem has committed to Syracuse, a late addition to a class that includes guard Kadary Richmond and forward Woody Newton. Anselem, a rim protector and versatile mobile 4 or 5, is a good long-term pickup for the Orange frontcourt. pic.twitter.com/b6SmGjM7mh

The 6-foot-10 Anselem picked Syracuse over Georgia, New Mexico and San Diego State. 247 Sports ranks Anselem as a top-150 prospect overall for 2020 and the No. 23 center.

Initially a 2021 recruit, Anselem reclassified up a year. For a period of time, too, LSU and Alabama loomed as strong possibilities to land Anselem.

Syracuse already has some depth along the frontline for next season; however, both Marek Dolezaj and Bourama Sidibe are seniors. Beyond those two, rising sophomore Quincy Guerrier showed plenty of potential during the 2019-20 season, especially on the glass. (Guerrier is going to be good. He already is, in fact.)

Jesse Edwards, another rising sophomore, stands 6-foot-11, but played just 145 minutes this season. After redshirting this season, John Bol Ajak will join the frontcourt rotation next season, too.