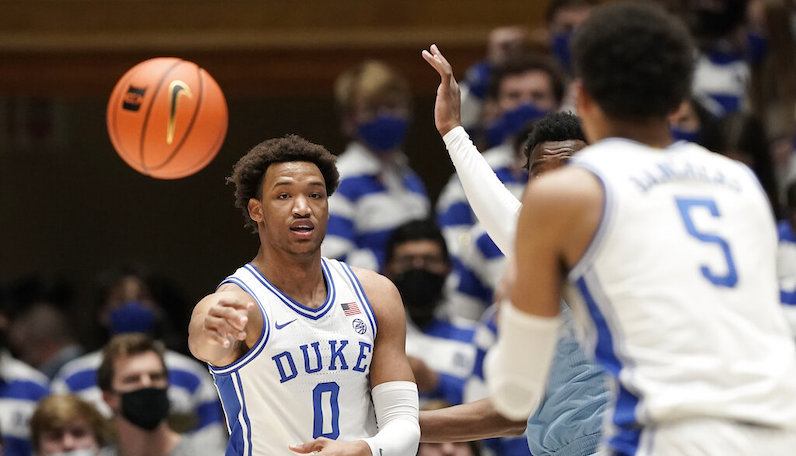 As a busy non-conference schedule heads into its homestretch, league play is right around the corner for the ACC. With plenty to discuss, let’s dive in — the first ACC Power Rankings of the 2021-22 season.

The Blue Devils return to the floor Tuesday night for the first time in two weeks — going back to the Ohio State loss. Duke now has three home, non-conference games this week, which will serve as a tune-up before league action starts in full.

Briefly, I’d like to take a second to acknowledge one of my favorite plays that’s happening in the ACC this season — featuring the ever-evolving Wendell Moore Jr.

Duke has been running this little 21/DHO exchange for years now; however, Moore is one of the absolute best at faking the handoff (keep) and turning the corner for a rim finish.

Moore is shooting just under 74 percent at the rim this season, with 75 percent of his rim field goals coming unassisted.

This play is made especially dangerous when Moore works in concert with Trevor Keels, another power guard who can shoot, play-make and use his strength to get downhill.

Opponents get caught up in how they want to defend this action. Moore exploits these windows and plays decisive, downhill basketball.

According to Pivot Analysis, Duke is +97 in 219 minutes with Moore and Keels on the floor together, while scoring 1.21 points per possession.

Since the loss to Tennessee, the Tar Heels have won four straight games — each by 17 or more points. Thanks to a reworked half-court system, North Carolina looks like an elite offensive team, led by sophomore guards Caleb Love (43.2 3P%) and RJ Davis (48.7 3P%).

Brady Manek has been a huge contributor, too. He adds a critical spacing/shooting element to North Carolina’s frontcourt.

Last week, I put together a deep dive on Wake Forest, which focused on the team’s new style of play, an efficient offense and the additions of Jake LaRavia and Alondes Williams. Check that out.

Bottom line: this team is really solid and tough to prepare for on offense. Pace and space — with multiple playmakers on the floor at all times — are alive and well in Winston-Salem.

It’s been an uneasy start to the season for Mike Young and the Hokies. There are still plenty of reasons to buy/like this team. Unfortunately, though, Virginia Tech struggled vs. length and athleticism in losses to Memphis and Dayton.

The issues run deeper, though.

Back on Dec. 4, Virginia Tech opened ACC play with a home loss to Wake Forest. During that game, Wake Forest scored 1.32 points per possession — the program’s most efficient offensive game vs. an ACC opponent in five years — while carving up Virginia Tech’s pick-and-roll defense.

As of right now, this just isn’t a very good offensive team: the Cards rank 116th nationally in adjusted offensive efficiency, according to KenPom.

Overall in the halfcourt…

Louisville is shooting 37% and averaging .75 points per possession.

It’s truly a miracle this team only has three losses to be honest. I suppose that’s the positive here.

FSU got a big game from Malik Osborne, but Leonard Hamilton’s club fell to South Carolina up in Rock Hill. This marked three straight losses for Florida State: a blowout at Purdue, followed by defeats to Syracuse and South Carolina by a combined three points.

After a hot start, freshman forward John Butler has struggled over the last three games. However, Butler is still one of the more intriguing draft prospects in the ACC this season: a 7-footer that covers ground defensively, can shoot, and play with the ball some, too.

It’s early, but Miami (8-3) has constructed a borderline top-50 offense this season behind a staunch pick-and-roll attack. That’s nothing new for the Hurricanes, one of the most committed pick-and-roll programs in the country. The efficiency, though, is next level.

According to Synergy Sports, Miami ranks No. 7 nationally in points per possession from pick-and-roll ball handlers: 1.06 PPP (58.2 eFG%). As usual, this style of play is helping reduce turnovers, too: 14.9 percent turnover rate, a top-25 number nationally.

Three Canes in double-digits so far:
Isaiah Wong has 12 and Charlie Moore & Kam McGusty each have 10. pic.twitter.com/Pol8sdHETB

It’s not just one guy; this is a collective army of screen-roll creators. Isaiah Wong and veteran Kam McGusty are both scoring over 1.1 points per pick-and-roll possession.

For roughly 90 percent of regulation, NC State’s defense did exactly what was required vs. Jaden Ivey and Purdue. The Wolfpack showed Ivey numbers and walled off the rim; NC State also did a nice job staying attached to Purdue’s off-ball shooters.

Things felt a little rickety for Notre Dame after a 16-point loss at Boston College, the team’s fourth defeat in five games. The offense, which needs to be the strength of this team, sputtered vs. Texas A&M and Boston College.

However, the Irish bounced back with a huge home win over a good Kentucky team. The hero of the game was freshman guard Blake Wesley — a player I highlighted two weeks back as one of the ACC’s more intriguing offensive talents.

With Buddy Boeheim struggles shooting from the field (27.5 3P%, 44 eFG%), it’s been a bit of a mixed bad for Syracuse, so far. Two of Syracuse’s five defeats have come against very good teams: Villanova and Auburn, led by the scintillating Jabari Smith.

One of the big plus this season, though, is the play of junior center Jesse Edwards.

In the past, Edwards flashed his defensive upside; however, with increased playing time, Edwards is really coming into his own as a two-way center.

Edwards is shooting 72.3 percent from the field — with basically all of that work coming off the catch and at the rim. Edwards already has 14 dunks on the season, which is more than his first two seasons combined.

According to Synergy Sports, Edwards is shooting 83.3 percent on cut field goal attempts, while also scoring 1.44 points per possession as a pick-and-roll dive man (64.3 FG%). He’s even shown some skills in the short roll, too.

From the middle of the zone, Edwards ranks No. 18 nationally with a 12.3 percent block rate.

Following losses to Rutgers and Miami, Clemson picked up its best win of the season: an overtime victory in Atlanta over Drake.

If the defense can round into form, this Clemson team has the chance to be really solid. Despite the loss of Aamir Simms, the Tigers are improved with a tricky 5-out offense.

Virginia’s offensive woes continue to rear their ugly head. There are some additional strings Tony Bennett can try to pull — in an effort to juice the half-court offense — but the options are mostly limited.

Unfortunately, there’s just a dearth of perimeter creation and shooting. Over the last two games, the Cavaliers went a combined 8-of-47 on 3-point attempts (17 3p%).

The Yellow Jackets have dropped three straight games, albeit all against quality opponents: Wisconsin, North Carolina and LSU.

Senior guard Michael Devoe ranks third nationally in scoring average (22.1 points per game); however, the lefty was mostly held in check by an awesome Tigers defense, headlined by Tari Eason and Alex Fudge.

After a week off in between games, Boston College fell on the road to a good Saint Louis team, 79-68.

So far, Earl Grant has gotten this team to play to expectations. The Eagles have four losses on the season, but all four defeats have come vs. top-75 opponents.

The Panthers continue to slump on offense. Jeff Capel’s club shot just 2-of-13 on 3-point attempts in a loss vs. King Rice and Monmouth.