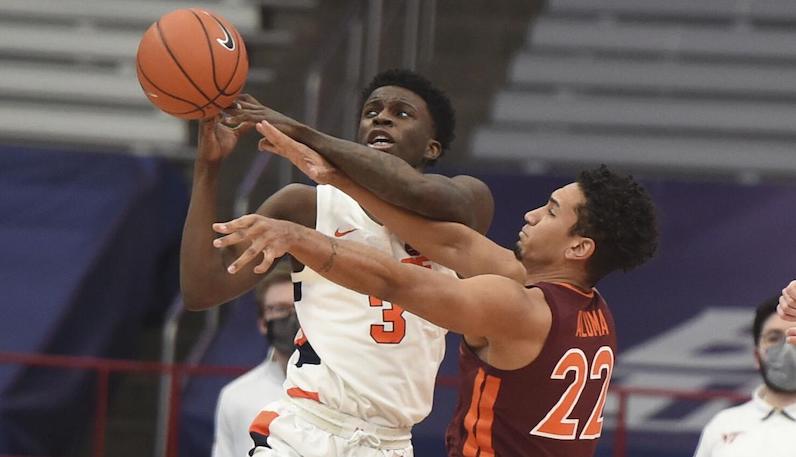 Kadary Richmond, one of the top talents in the ACC, is on the move. On Tuesday, Richmond officially entered the transfer portal.

A top-100 prospect out of high school, Richmond drips potential. He brings outstanding length (6-foot-5) and reach to the point guard position. As a freshman, Richmond averaged 6.3 points, 3.1 assists and 1.6 steals per game. The box score stats only tell a portion of the story, though.

Richmond is certainly a prospect that — if he wanted — could’ve tested the NBA Draft waters. (Maybe all that would’ve taken is for one team to give him a promise. Alas.)

While relegated to a bench role (21 minutes per game), Richmond was a serious impact player for Syracuse — on both ends of the floor. Richmond posted a 2.8 percent block rate and a 4.5 percent steal rate. It’ll be interesting to see him play in a scheme that relies more heavily on man-to-man principles.

According to Bart Torvik’s database, Richmond was one of only two players in the country this season with 25 percent assist rate, 2 percent block rate and 4 percent steal rate.

Going back to the 2007-08 season, there are only four freshmen from high-major programs with 20 percent assist rate, 2.5 percent block rate and 2.5 percent steal rate.

During the 2020-21 season, Richmond essentially served as the backup for sophomore point guard Joe Girard. While Girard has some abilities, he’s a shooter that, for the most part, didn’t shoot very well. Girard (45.3 eFG%) shot 33.3 percent on his 3-point attempts and under 39 percent on 2-point attempts.

Jim Boeheim’s refusal to shift to Richmond as his team’s primary ball handler (on a roster with several good second-side offensive pieces) was the source of much consternation. When Richmond was on the floor this season, Syracuse was a better basketball team — simply put.

Syracuse this season with Kadary Richmond on the floor, via Pivot Analysis