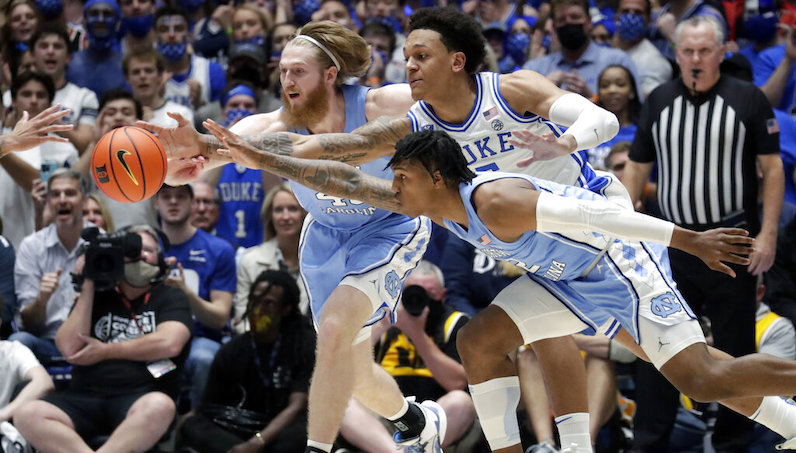 The world of major college athletics shook on Thursday. The ramifications will be felt for years to come. With UCLA and USC approved and set to leave the Pac-12 for the Big Ten in 2024, things will never be quite the same. So much for the Alliance.

As the advertising and television dollars around the sport of college football grow, so, too, does the influence of powerful broadcast networks. According to Jon Wilner, who broke the story, UCLA and USC will receive upwards of $100 million annually from the Big Ten. That’s more than twice what the two universities pull in as members of the Pac-12.

Source: USC and UCLA are planning to leave for the Big Ten as early as 2024. Move *has not been finalized* at the highest levels of power.

Of course, this type of move is likely just the tip of the iceberg; the SEC, bolstered by the additions of Texas and Oklahoma, and the Big Ten are poised to add more teams. Nothing feels off the table for the two leagues that dominate other Power Five conferences in terms of revenue.

Unsurprisingly, those two leagues launched successful television networks of their own, both of which are back by some of the largest media conglomerates in the world: Fox (Big Ten) and ESPN/Disney (SEC). The SEC signed a $300 million deal with ESPN in 2020.

(This message will repeat tomorrow morning)

The ACC Network, formed with an ESPN partnership as well, has existed for almost three years now. For the time, it’s been a relatively nice jolt of increased revenue, although it’s nowhere near the money-maker of its contemporaries. The launch year of the ACC Network coinciding with the COVID-19 pandemic didn’t help, either.

As the SEC and Big Ten consolidate power, it’s obvious to see some of the very real existential issues facing the ACC — along with the Big 12 and Pac-12.

“We’re literally nuking the Rose Bowl,” one Big Ten source said. “But what’s the point of the Rose Bowl if the whole point is the Playoff?” https://t.co/KwTScduuu8

Look back, look ahead

So far, the ACC has remained connected. During the previous two decades of realignment, former ACC commissioner John Swofford navigated some tricky waters; Maryland was lost to the Big Ten, while the league expanded with the additions of Virginia Tech, Miami, Boston College, Syracuse, Pittsburgh and Louisville.

Current commissioner Jim Phillips, who left Big Ten member school Northwestern to join the ACC in Dec. 2020, has his work cut out.

For years now, there have been rumblings that schools like Clemson and Florida State would look to jump ship — towards leagues with more money and football prestige. Miami, now emboldened by new leadership and an influx of cash, is in those types of conversations, too. Clemson gets to enjoy being the ACC’s football kingpin; however, it could get jumpy as it looks to remain financial competitive with other national powers.

Wilner, who broke the UCLA/USC story, floated the possibility of the Big Ten looking to add more programs, including Duke and North Carolina.

If I'm the Big Ten and I want to get to 18, the short list is Washington, Oregon, UNC, Duke … and Missouri

Those two programs aren’t football powers, obviously, but both schools are incredibly popular brands. Duke basketball moves the needle in a way that fewer other college programs can — regardless of sport. The Blue Devils have managed to successfully harness social media as a tool to grow their program. Those social channels are powerful, especially when combined with Duke’s presence as a mover of TV ratings, too.

Per @ESPN, last Friday's @DukeMBB vs @ZagMBB drew 2.8 million viewers with peak audience of 3.1 million. Most watched college basketball game on any network since March 9, 2019.

UNC basketball is another recognizable brand — one that people across the country and around the globe recognize. North Carolina’s connection with Michael Jordan — one of the most popular and athletes in human history — is quite meaningful. So, too, are the decades of incredible success on the basketball floor.

Duke and North Carolina both carry enormous weight within the ACC. It’s not at this point yet, but if UCLA and USC can leave the Pac-12, anything is possible. The ACC should tread carefully with two of the most influential brands in North American sports.

Where do academics factor in?

For whatever it’s worth, USC and UCLA are both members of the Association of American Universities (AAU). Obviously, money and football talk, but this distinction is seemingly important to the Big Ten as well.

USC & UCLA are both AAU schools, which is a prestigious academic distinction that has always mattered to the Big Ten.

Of note: five ACC universities are members of the group — Duke, North Carolina, Virginia, Pittsburgh and Georgia Tech. Virginia and Pittsburgh could absolutely offer appeal to a growing Big Ten conference, too.

What about Notre Dame?

Notre Dame has spent the last decade as a partial member of the ACC; under this partnership, the Irish remained an independent football operation while functioning as a member of the league in all other sports.

The lone exception was the 2020 football season, which took place amid the first year of the COVID-19 pandemic in America. During that season, Notre Dame joined as a football member, too; however, the experience lasted only a matter of weeks.

Phillips and the ACC have continued to push for Notre Dame to join the league as a full-time member — bringing its football program into the fold. However, the Big Ten has never had a better hand to play if it wants to lure Notre Dame.

Notre Dame has a ton of leverage right now, yes.

But you'd also have to think that the Big Ten has never been a more attractive landing spot for Notre Dame than right now, either.

Add all of this up and it paints a rather precarious situation for the ACC, one with limited opportunities for its own growth. The premier basketball conference reoriented itself around football as its tentpole for survival in an ever-changing landscape. The paradigm continues to shift, though, and that spells trouble for the conference.

👇🏼👇🏼👇🏼this is why grown ass adults are losing their minds right now pic.twitter.com/35FijI83Uw

Going off these numbers, there’s no longer a Power Five; the Big Ten and SEC are lapping the rest of the field. They stand alone at the top.

Despite these challenges, the ACC still has a powerful leverage point working in its favor: its Grant of Rights deal.

Back in July 2016, Swofford announced a new media rights deal for the league and ESPN, which would extend out for 20 years, through the 2035-2036 academic year. This announcement also coincided with the plans to launch the ACC Network.

A source told me that if Notre Dame were to withdraw from the ACC, it can play football wherever it wants. It would have to pay exit fee and grant of rights fees for its other sports.

The ACC’s grant of rights includes an exit fee in the neighborhood of $52 million. That’s a lot of cash and, seemingly, a barrier for schools that may look to defect, although the financial math is different for Notre Dame, as ESPN’s Heather Dinich notes.

Who knows, though. As television money continues to flow into the marketplace, perhaps that buyout number isn’t as intimidating as it felt back in 2016. Things are changing at a rapid pace; if university presidents and administrators see greater financial opportunities on the other side, then they’ll make moves to get to those television dollars.

At the end of the day, these decisions are essentially predetermined. It may seem glib, even in the bizarro world of college sports, but capital is the one driving force; nothing else really matters for the decision-makers. They will behave and make choices based off how much money they can make. This is unpleasant to think about, but it’s no different from any other industry.

One of the few things that can occasionally get in the way of capital-based decisions, however, is hubris. Angered by Texas and Oklahoma’s move to the SEC, the ACC and Pac-12 punted on a proposal to expand the College Football Playoff to six teams. This decision — spirited by Phillips — could prove to be costly for the longterm sustainability of the ACC.

Six months ago the Pac 12 and ACC rejected a golden ticket football playoff plan with automatic bids and a cut of a $1 billion revenue pie. It may go down as the most ill advised decision in college athletics history. https://t.co/J9gn9vtxZf

Phillips and the ACC must figure out ways to grow the ACC Network and bring in more money, which will be tough, especially with a smaller seat at the table once the current four-team CFP model expires in 2026.

Regardless, they must act swiftly and with precision — the overall trend lines aren’t good. As of right now, the grant of media rights may be the one thing holding the league together, and that won’t last forever.