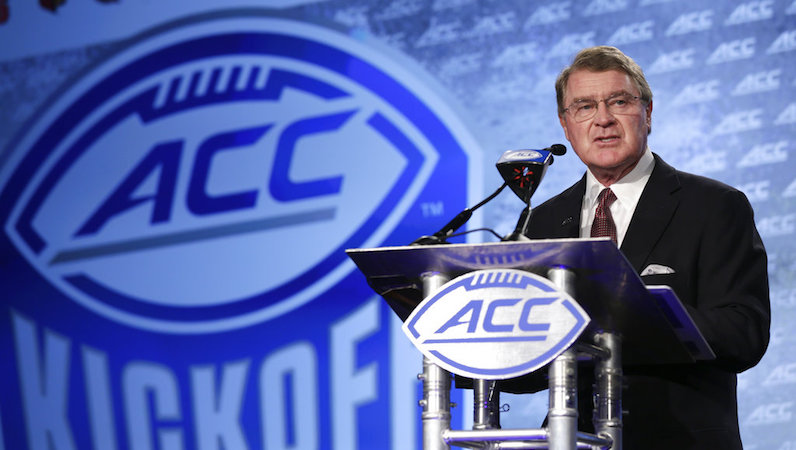 While the ACC announced its decision to go with an altered 11-game schedule (over 13 weeks) for the 2020 season, SEC athletic directors came out on the same day in support of a 10-game conference-only schedule. (SEC school presidents still need to vote on the measure.)

The ACC’s model, which has the season starting Sept. 7-12, features 10 conference games — a scrambled amalgam of how the league’s conference schedule was initially set, now with the addition of Notre Dame. The 11th game functions as a bit of an open date. In theory, this measure was done to preserve traditional/regional ACC/SEC rivalries

There were other ACC-SEC matchups initially scheduled for 2020 that are now on the chopping block, too. Potentially. Virginia was supposed to play Georgia in Atlanta; NC State was set to host Mississippi State on Sept. 12. North Carolin had Auburn on its schedule.

As of right now, there are still plenty of unknowns with the ACC’s schedule: dates, times and broadcast information. (Television revenue will be shared amongst all 15 ACC schools.) If ACC team are to play in non-conference games, there are limitations: games must be played in the program’s home state.

Louisville AD Vince Tyra today on #NotreDame's willingness to share NBC football $ this year: "I don’t think we would have had much of a conversation if that wasn’t part of the deal."

The ACC’s decision comes three weeks after the Big 10 and Pac-12 elected to go with 10 game (conference-only) schedules for the 2020 season. The league could also adjust to a 10-game conference-only schedule, too, depending on the mechanics of a piecemeal out-of-conference slate. (This all, of course, assumes that a full season will actually be able to take place amid the horrors of COVID-19, which, eh, we’ll see.)

This move from the ACC appears to angered some SEC shareholders, though. It was also the upshot of a hyperbolic article from Sports Illustrated’s Pat Forde that accused the ACC and John Swofford of usurping the SEC’s decision-making process and pushing the league into an undesirable situation. Essentially, the ACC has passed the buck on potentially cancelling those games to the SEC. That’s certainly the message SEC talking head Paul Finebaum pushed Thursday morning, too.

Or, according to Forde: “By announcing a desire to play one non-conference game but not identifying the opponent beyond saying it had to be played in their home state, the ACC basically threw 100 gallons of paint around the corner and made the SEC stand in it.”

Either way, what the SEC decides to do with its non-conference schedule will have direct impact on the ACC’s outlook for the 2020 season. Assume the SEC goes with the 10-game conference-only model, will ACC teams look elsewhere for 11th games? That could certainly create challenges, too, or even moral dilemmas.

Fall camps open for some programs next week; even in the adjusted schedule, games are set to be played in 5-6 weeks. There’s still so much to iron out in a short period of time. The SEC’s decision will be the next big shoe to drop.

For now, it appears as though the ACC cleared one hurdle: having a schedule, albeit one with plenty of question marks, a critical first step to actually having a season.

UNC, NC State, Duke and Wake: Who plays who, and where?