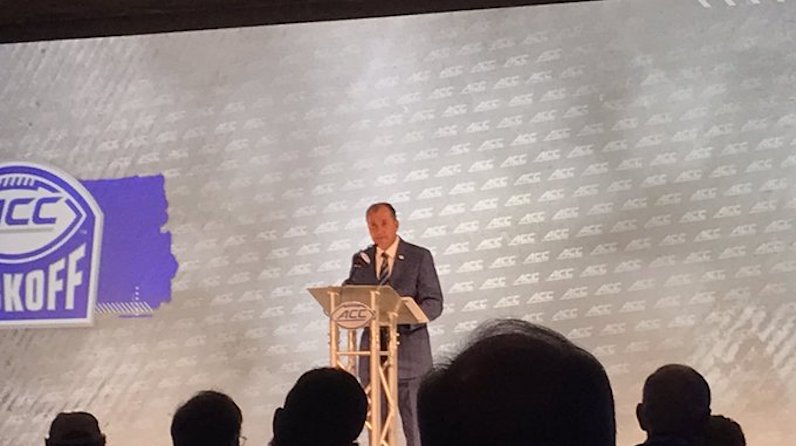 ACC Commissioner Jim Phillips addressed the media at 2021 ACC Kickoff — with a focus on COVID-19, vaccinations, NIL and football (Photo via Twitter)

Back in January, ACC commissioner Jim Phillips came out against expansion for the College Football Playoff. Phillips said his decisions was backed by the opinions of ACC football coaches, along with university presidents and athletic directors.

That announcement was met with much acrimony; however, Phillips used his leverage and got his wish. The CFP released a statement on Friday (Feb. 18); it detailed how the group will keep its current four-team structure through the 2025-26 season. Once that season concludes, the initial 12-year agreement will be satisfied.

Been in the cards since Jim Phillips said last month the the ACC would veto, but CFP expansion is officially off the table through 2026. pic.twitter.com/ERlAlUAkri

Expansion talks have been in the works for years now. Last summer, however, it seemed as though the change was inevitable. The CFP would expand to 12 teams. For now, that plans has been shelved.

According to various reports, ACC coaches and Phillips are anxious about playoff expansion without first addressing other aspects of the game — namely NIL and the transfer portal.

Eventually, the CFP will expand; that’s just a forgone conclusion. There’s too much money to be made, and everyone will want a piece. This is just how things run in America, especially with its No. 1 entertainment option: football.

In the meantime, Phillips, the ACC and the Alliance will use whatever leverage they possess to get some measures they deem necessary.