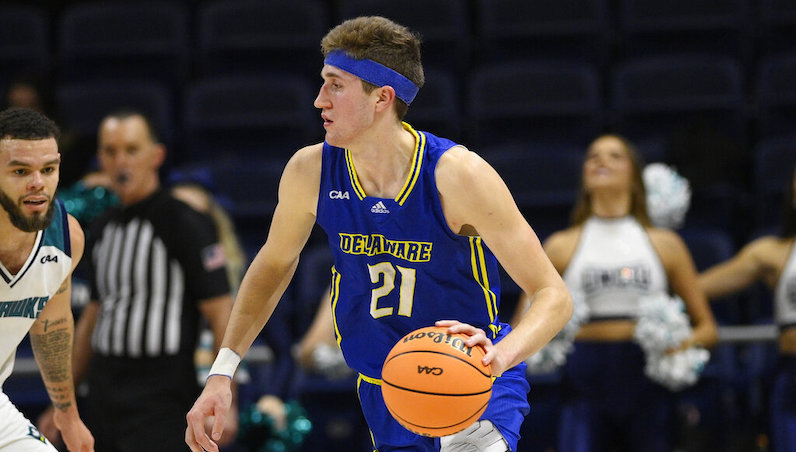 Delaware forward Andrew Carr (21) in action during the first half of an NCAA college basketball game in the championship of the Colonial Athletic Association conference tournament against UNC Wilmington, Tuesday, March 8, 2022, in Washington. (AP Photo/Nick Wass)

Andrew Carr is headed to Wake Forest. Steve Forbes and the Demon Deacons landed another talented offensive player in the transfer portal.

Delaware transfer Andrew Carr has committed to Wake Forest. 6-foot-10 forward averaged 10.0 points, 5.1 rebounds, shot 56.4%. Had 17 and 12 in the CAA title game. 13 points on 5-for-5 shooting against Villanova in the NCAA tournament.

Overall, Carr scored efficiently from every level on the floor. Carr shot 65.9 percent at the rim, per Bart Torvik’s shot data, including 29 dunks. Carr also shot 45.1 percent on long 2s — with 65.2 percent on those makes coming unassisted.

According to Synergy, Carr scored 1.09 points per post-up possession (64.7 FG%), one of the top numbers in the Colonial Athletic Association.

Alondes Williams and Isaiah Mucius remain in the NBA Draft; breakout star Jake LaRavia continues to test the draft waters, too, while his stock rises. No matter how it gets sliced, Wake Forest needed to add some offensive punch. Carr is a step in that direction.

With Kerwin Walton in the portal, 3 transfer targets for North Carolina