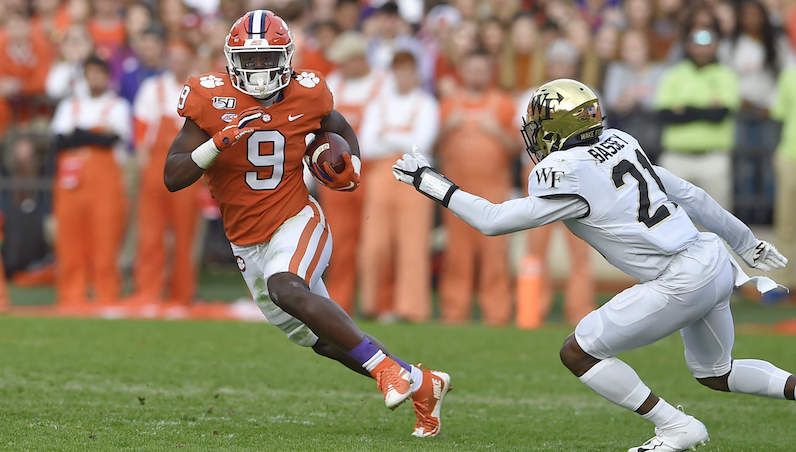 With only three first round picks, the 2020 NFL Draft proved to be a bit of a downer for the ACC. (Although the ACC did finish with 27 players drafted, the fourth most of any single conference.) However, a fair amount of talent returns to the league — including a strong group of players that could’ve declared for the 2020 draft, too.

Pro Football Focus put out its list of the top 25 prospects for the 2021 NFL Draft that elected to return to school for the 2020 season. Of that group, eight come from the ACC, including the No. 1 overall prospect: Travis Etienne. (This group doesn’t account for someone like Clemson QB Trevor Lawrence, who won’t become draft eligible until 2021.)

This year is gonna be so fun to watch Marvin Wilson again.

That’s him tossing first-round pick Mekhi Becton (all 6’7, 350+ of him) pic.twitter.com/wGhqXDhZDz

Last season, VT’s Caleb Farley had as many pass break-ups (12) as completions allowed.

On one hand, ACC OLs were awful last year, so that prob skews results a bit, but among the top 10 returners in highest pass rush success, 4 play in the ACC: Rumph, Snowden, Rousseau & Basham (min 100 pass rush snaps)

Quincy Roche slaps down the blocker's low-setting hands & collapses the inside shoulder. Roche "runs the hoop" & brings down the QB.

If the blocker's punch is high, keep them high. If they're low, keep them low.