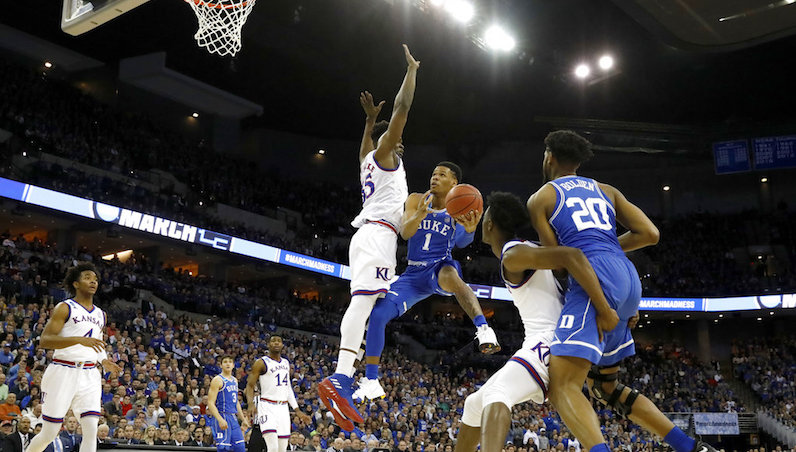 It was always a calculated risk for Trevon Duval to enter the NBA Draft after his freshman season at Duke. Duval went undrafted on Thursday night; as of relatively early Friday morning, he remains unsigned, too.

Duval, the No. 2 point guard in the 2017 recruiting class, saw four of his teammates get drafted. Marvin Bagley went second overall to the Sacramento Kings; Wendell Carter wasn’t far behind — taken by the Chicago Bulls at No. 7. Later in the draft, Grayson Allen became the third Blue Devil to go in round 1: the Utah Jazz made him the 21st pick.

Early in the second round, Gary Trent was selected 37th overall by Sacramento; however, the reunion with Bagley in Northern California was cut short. Trent was promptly traded to the Portland Trail Blazers.

It will be worth monitoring on Friday what happens with Trevon Duval, who currently is still unsigned. In terms of raw talent, Duval is no doubt one of the best players on the open market. It seemed like that would be enough to get him drafted, but that simply wasn’t the case.

The undrafted route has proven fruitful to two recent Duke guards, though: Seth Curry and Quinn Cook. Curry, while nursing an injury, played out the final season of his two-year, $6 million deal with Dallas. Cook parlayed a two-way contract with Golden State into a multi-year deal with the NBA champs.