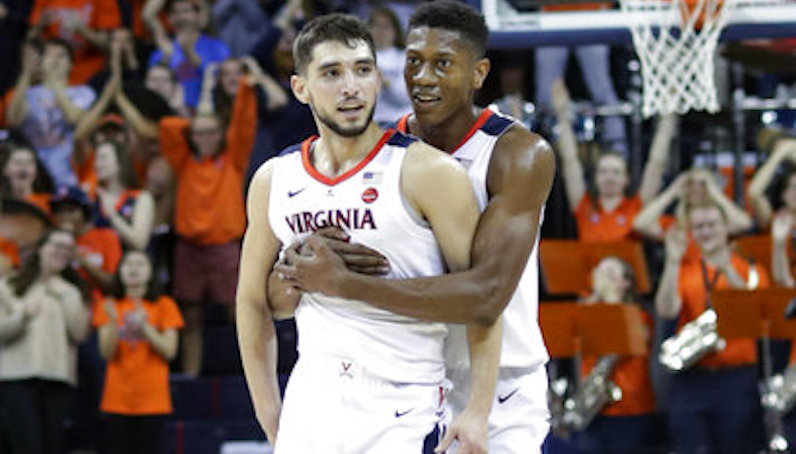 As Virginia Basketball gets set to open up play in the Battle 4 Atlantis against Middle Tennessee State, it’s worth taking a look at a few early-season developments. Virginia 3-0 and currently rank fourth overall in KenPom. Expectations are sky-high for this team, and so far, though three games, there’s an awful lot to like with the Cavaliers.

At this point, there should be no surprise here: Virginia’s defense is elite. Currently, the Cavaliers rank second nationally in KenPom’s weighted defensive efficiency: 87.8 points per 100 possessions. Through the first three games of the season, according to Synergy Sports, UVA has allowed a microscopic 0.62 points per possession (36.7 eFG%) on half-court defensive possessions (0.76 points per possession last season). That ranks No. 6 in the nation and is tops in the ACC by a solid margin.

The Cavaliers lost two really good defenders from last season’s team: Devon Hall, a productive 3-and-D wing, and Isaiah Wilkins. It’s possible to make a case, too, that Wilkins is the best individual defender of the Tony Bennett era in Charlottesville, which is saying something. (Apologies to Malcolm Brogdon #FearTheDeer)

However, they have managed to keep it going because, well, this is what Bennett’s teams do. It certainly doesn’t hurt that Bennett is able to give more playing time to De’Andre Hunter, a menacing defensive prospect, and plug-and-chug Braxton Key into the rotation, too.

With those two in the mix — playing a combined 52.6 minutes per game — opponents have an effective shooting rate of just 40.6 percent, and the Cavaliers have blocked 13.4 percent of opposing two-point field goal attempts. Those are both excellent numbers.

Opponents have scored just 0.45 points per possession (31.8 eFG%) on isolation possessions. Baked into that cake is a turnover rate of 35 percent on iso looks, per Synergy. Overall, opponents have a 25.2 percent turnover rate against UVA. Hunter, Key and Ty Jerome are all averaging over three steals per 100 possessions, too.

A core concept of the Pack Line defense is strong rim protection. Last season, opponents shot just 49.2 percent and scored only 1.02 points per possession (No. 15 in the nation) around the basket on offense, according to Synergy. Again, it’s just three games, and the competition has been mediocre at best, but opponents are shooting just 43.5 percent and scoring 0.89 points per possession at the rim.

A Major Key for Virginia Basketball

Speaking of Key, it’s taken very little time for the rangy Alabama transfer to have an impact on defense. The sample is super small, but Key is one of only three ACC players currently with a block rate above six percent and a steal rate above three percent (minimum 30 minutes played).

Key has factored in the glass, too. Key, who averages 6.3 rebounds per game (16.6 per 100 possessions), leads Virginia in defense rebound rate. According to KenPom, Key has grabbed 20.8 percent of available defensive rebounds while on the floor.

Nothing off about this fence

The Cavs rank 13th nationally in adjusted offensive efficiency — 113.9 points per 100 possessions. They rank second nationally in both effective shooting (64.4 eFG%) and turnover rate (11.2 percent). From the Land of Good and Plenty, Virginia has shot 33-of-70 on three-point attempts, which translates to 47.1 percent, good for fourth in the nation.

According to Synergy, UVA has scored 1.31 points per possession (63 eFG%) on spot-up attempts; only two teams — Kansas and New Mexico — have been more efficient on this possession type.

One of the numbers that jumps out while going through Virginia’s early-season offensive profile is time of possession. Currently, the Cavs average 18 second per offensive possession, which ranks 264th in the nation. This may not seem too radical, but that’s a shift from previous campaigns. Last season, UVA averaged 20.9 seconds per offensive possession (No. 351); the year prior, that was 21.3 seconds (also No. 351).

No one will confuse this team’s fast-break game with the go-go system of the New Orleans Pelicans, but nearly 11 percent of Virginia’s possessions have come in transition this season. That’s up from 8.5 percent a season ago, per Synergy. On those possessions, Virginia has been wickedly efficient — another staple under Bennett: 1.39 points per possession (88.2 eFG%).

Jerome, Hunter and Kyle Guy have all done serious damage in the open floor, too. Those three have combined to score 1.75 points per possession in transition.

Another new addition to the rotation, freshman point guard Kihei Clark (11 assists in 72 minutes), has helped provide a spark. Clark stands just 5-foot-9, but he provides some on-ball dribble creation, which can help differentiate the offense — to an extent. Virginia has played Clark and Jerome together some this season, too, which works well. Jerome, one of the best spot-up players in the ACC, gets to move off the ball some.

Virginia’s move-blocker approach to getting buckets will always look to grind opponents to mush — caked in between an endless supply of pindowns and flare screens. However, with Clark and Hunter’s face-up isolation game in the mix now, UVA has the ability to show a little more versatility on offense.

In the 2017-18 season, no team used off-screen possessions more frequently than UVA; according to Synergy, 18.8 percent of Virginia’s possessions came off screens — by far the most in Division I basketball. This season, that’s dropped to 13.7 percent.

That’s small stuff on the margins, and Virginia basketball has 30+ games spaced out over the next four months; a lot can and will change in that period of time. However, these are all good things to see at the outset of a new season.

The defense, again, is exceptional, and with a future NBA lottery pick in Hunter pushing the offense — along with Jerome, who has NBA potential, too — there’s serious upside for UVA. This team has the ability to cut down more nets and avenge last season’s historical upset. Stay tuned.

Point it out: Led by Ty Jerome, UVA’s point guards shine early in the season