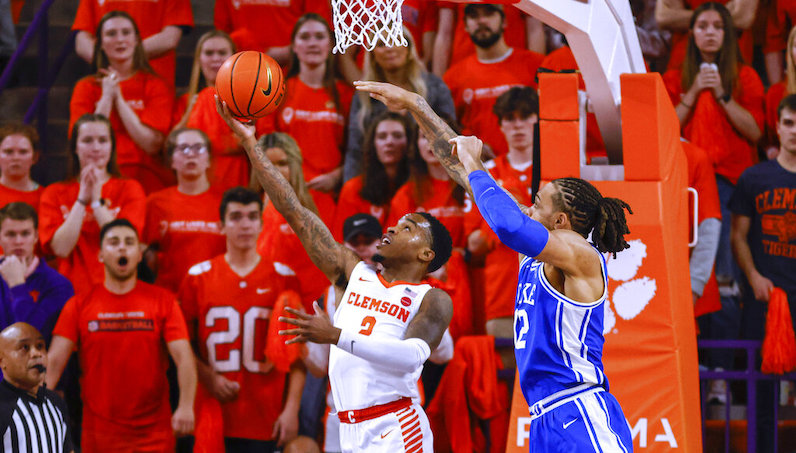 Al-Amir Dawes, one of the more explosive shooters in the ACC, is on the move. After three seasons at Clemson, the veteran combo guard is now in the NCAA transfer portal.

Dawes is now the second veteran guard from Clemson to enter the portal within the last two weeks. Nick Honor, a strong two-way player, entered the portal back on March 22, too.

This spells a little bit of trouble for Brad Brownell. The Tigers were a good offensive unit this season; they finished the year Top 50 nationally in efficiency, 3-point percentage (36.3 3P%) and turnover rate (16.4 TOV%). This is a rather structured offense, too. Clemson runs a lot of different sets.

On paper, Clemson could’ve returned its entire roster. There still could be a lot of talent to return, including PJ Hall, one of the most frontcourt scorers in the ACC. (Long live the hook shot!) But Dawes and Honor were two of this team’s off-dribble shot-makers. They’ll need to be replaced.

Dawes is a natural scorer, one that can absolutely bomb from deep, which is what Clemson will miss most: 3-point shooting. During his career, Dawes drained 175-of-471 3-point attempts (37.2 3P%).

Dawes can move off the ball and still find his shot. He never stops moving on this possession vs. Wake Forest; Dawes flows from the weave action to a relocation corner 3 above Alondes Williams.

Of note: 32 percent of Dawes’ 3-pointers were unassisted. The upshot: Dawes can create his own opportunities from distance. On this possession, Clemson runs pick-and-roll action out of a Horns set, which Duke switches. Dawes burns Theo John with another triple.

According to Synergy Sports, Dawes scored 1.21 points per spot-up possession this season, which ranked No. 6 in the ACC among players with 100+ possessions.

Dawes doesn’t get to the line much (2.4 FTA per 40 minutes), but he’s a knockdown shooter from the stripe, another indication of his shooting skill. During his junior season, Dawes shot 84.7 percent on his free throw attempts.

Dawes isn’t a primary ball handler, but he can still play with the rock and make pick-and-roll reads. His ideal role would likely give him a balance of the two: play alongside a primary creator, look for his spot-up jumper and attack with the ball in secondary situations.

This is a gorgeous, multi-layered read from Dawes out of Clemson’s Chin pick-and-roll action. Wake Forest brings Dallas Walton up to the level of the screen, which requires back-side rotations as Ben Middlebrooks (No. 10) rolls to the rim. Dawes sees this and skips the ball to Honor for a weak-side corner 3.

It’s important to remember, too: Clemson inverts its offense and runs a lot of action through the elbow and high post. Dawes has reps playing without the ball in the half court, which is great; however, that type of play distribution decentralizes playmaking duties. This, in turn, can deflate assist numbers for that team’s guards.

Regardless, Dawes has shown some creativity and vision as a passer.