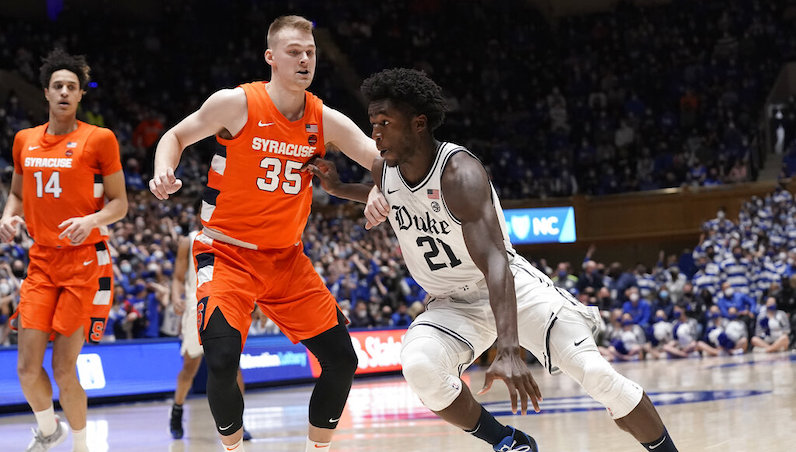 This is one of the busiest weeks in recent memory for ACC men’s basketball, including a three-game slate Monday night. There’s no time to waste; let’s check out this week’s ACC Power Rankings.

Following a one-point, overtime loss at Florida State, Duke responded at home by throttling Syracuse, 79-59. The victory marks one of Duke’s best shooting performances this season. Despite not having Trevor Keels, the Blue Devils shredded the zone with 14 3-pointers, while also pounding the Orange on the glass.

In total, Duke rebounded 39.4 percent of its missed field goal attempts — a weakness of Syracuse’s zone.

AJ Griffin got things roll with four first-half 3-pointers; the freshman wing finished with 15 points. According to Synergy Sports, Griffin has scored 1.27 points per spot-up possession (64 eFG%) this season, good for No. 5 in the ACC.

Griffin has 54 total field goals on the season. Paolo Banchero has assisted on five of those buckets.

Unsurprisingly, Duke received strong play from the do-it-all Banchero, who worked as an offensive connector in the middle of the zone.

Banchero finished the game shooting 5-of-5 on attempts at the rim. Mark Williams went 6-of-7 on attempts around the basket, too.

Minus Keels, Wendell Moore Jr. stepped into an even larger playmaking role. In a performance that should inspire some confidence, Moore had one of his best games in recent weeks: 15 points (3-of-7 3PA), eight assists, two steals and only one turnover.

That’s the Wendell Moore Jr. that raises Duke’s ceiling to being a team that can contend for the Final Four in New Orleans.

Saturday night’s beatdown of North Carolina was a historical event for Wake Forest. The 98-76 victory in Winston-Salem marked the second-most points Wake Forest has ever scored vs. UNC. The 22-point win is the second-largest margin of victory ever for the program vs. North Carolina, too. (Back in the 2001-02 season, Wake Forest defeated UNC by 24 points, 90-66.)

As usual, Steve Forbes and the Demon Deacons were led by their dynamic duo: Alondes Williams and Jake LaRavia.

Williams provided his normal rim pressure and finished with 23 points (5-of-7 FGA rim), while LaRavia did his thing from every level of the floor. LaRavia went for 31 points (12-of-15 FTA), 10 rebounds, four assists and two steals.

Wake Forest started the game by spamming isolation plays for LaRavia to go one-on-one vs. Brady Manek. LaRavia delivered with a series a layups and hook shots.

Leonard Hamilton’s squad is in the midst of a six-game winning steak, including five straight over conference opponents (6-2 ACC).

Freshman wing Matthew Cleveland is now shooting 73 percent at the rim this season — with 15 dunks.

Follow the win over Duke, FSU’s switch scheme held Miami’s spread pick-and-roll attack in check over the weekend. Things, however, did get a little dicey for Florida State as a big lead was whittled down to a one-point victory.

It’s hard to turn Miami over on offense; however, Florida State held the Hurricanes to 3-of-10 shooting from the midrange and 7-of-25 (28 3P%) from beyond the arc.

Despite the struggles, Isaiah Wong was very good, as usual: 22 points and two steals. Wong is now up to 40 3P% in ACC play, too.

Blake Wesley led the way with 22 points, but a collective team effort is what pushed Notre Dame ahead of reeling Louisville.

There’s no rest for the weary. Following an 0-2 week — with two dreadful defensive performances — North Carolina must get set for three games this week.

UNC’s offense will bounce back; however, the Tar Heels are incredibly vulnerable when they struggle to score efficiently. With the team’s defense, it’s hard for North Carolina to drag games down into the mud and come up with a victory.

In both defeats last week, UNC allowed over 1.22 points per possession.

North Carolina’s defense ranks No. 354 nationally in opponent turnover percentage: 13.1 percent. That number drops to 12.3 percent in ACC play, good for last in the conference.

Miami and Wake Forest combined to turn the ball over vs. UNC only 12 times in 80 minutes of basketball.

For a moment, it looked like Virginia Tech had turned a corner. Following back-to-back wins over Notre Dame and NC State, the Hokies seemed poised to make a bit of a run.

That could still happen; however, what took place over the weekend is an obvious setback. Boston College bludgeoned Virginia Tech on the offensive glass — rebounding nearly 52 percent of its missed field goals. VT’s defense allowed 1.21 points per possession in defeat.

Beekman is now shooting 41.7 percent on his 3-point attempts in ACC action.

However, the defense didn’t come to play vs. NC State — allowing over 1.38 points per possession. This is one of the worst defensive performances of the Tony Bennett era.

The Wolfpack hit some tough shots in this game. But NC State’s spread pick-and-roll offense also exploited Virginia’s back-side rotations after hedging on the ball screen.

There’s time to turn it around, if that’s possible. But with four losses in their last five games, the Cardinals spoiled a pretty good offensive performance with the loss vs. Notre Dame on Saturday.

With Dereon Seabron driving the offense, NC State continues to receive wonderful secondary play from Terquavion Smith. The freshman guard has turned into one of the top perimeter scorers in the ACC.

Smith also got downhill and finished at the rim.

For the season, Smith is averaging 21.4 points and 2.4 steals per 40 minutes in conference games.

Over the years, one of the things Syracuse’s zone defense has been so good at is its ability to generate turnovers. With all of that size and length on the floor, Syracuse could make tasks such as driving to the rim or completing a pass an arduous experience.

That’s not the case this season, though. Syracuse’s defense has forced a turnover on just 18.2 percent of its possessions this season, which ranks No. 212 nationally. If this holds, it’ll be the team’s lowest turnover rate since the 2008-09 season.

Once again on Saturday, Duke was far too comfortable passing in and around the zone, before connecting on a good look at the hoop.

Clemson’s defense, which has been a concern all season, struggled up at Syracuse: 91 points, 1.26 points per possession. However, the Clemson rebounded and thumped Pitt over the weekend.

In both cases, the Tigers got excellent interior offense from PJ Hall, who is shooting just under 71 percent at the rim this season — with 12 dunks, including two at Syracuse.

If the ACC Tournament started today, Boston College wouldn’t be in action on that first Tuesday. Now, there’s still a lot of basketball on the horizon, but hats off to Earl Grant and the Eagles.

James Karnik was awesome again in the win over Virginia Tech: 26 points (9-of-11 2PA) and four offensive rebounds.

Georgia Tech has just one win in the month of January — a five-point victory over Boston College.

The Yellow Jackets lost their last two games — UNC and Wake Forest — by a combined 39 points.

Currently, there are only four high-major players with 30 percent usage, 20 percent defensive rebound rate and 10 percent offensive rebound rate. Three of those guys hail from the Big Ten: Trevion Williams and Zach Edey of Purdue, along with Kofi Cockburn of Illinois. Pitt’s John Hugley is the fourth.

Hugley has been a rebounding and scoring machine for the Panthers. He’s also a pretty good passer, which is useful given the amount of double teams he draws.

This isn’t going to be a fruitful season for Pittsburgh, but Hugley is having a breakthrough year. His play deserves more attention.