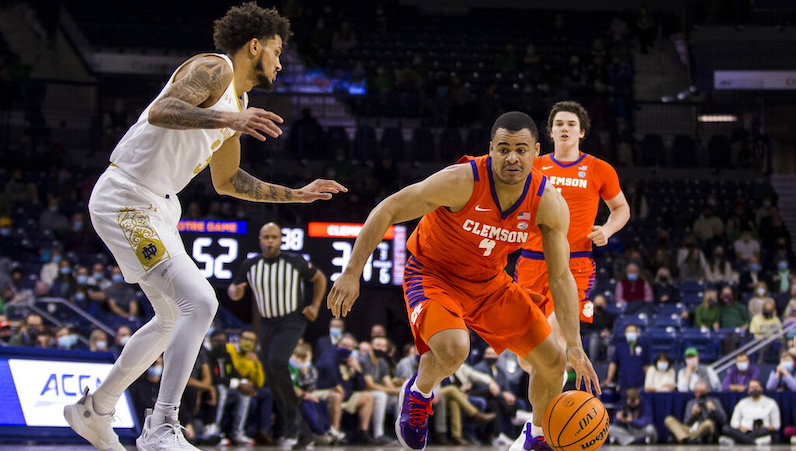 Nick Honor, one of the sneaky good two-way guards in the ACC, will enter the transfer portal after three years at Clemson.

The 5-foot-10 Honor spent his freshman season with Fordham (2018-19); he started 32 contests and averaged 15.3 points per game. Following that performance, Honor transferred to Clemson and took a redshirt year in the 2019-20 campaign.

Quick stat look at a handful of ACC players having impactful seasons following a redshirt year:

Honor plays with some real shot-making abilities; however, he’s likely at his best while guarding the ball at the point of attack. While he lacks in height, Honor is strong and moves well laterally. (Programs that are looking for a 3-and-D type point guard should kick the can on Honor as a veteran target.)

As a team, Clemson’s defense regressed this season, but the 2020-21 team — with Honor atop the defense — was a top-20 unit, according to KenPom. Honor finished that season with a steal rate of 3.5 percent, too, which ranked inside the top 70 nationally.

Honor’s been a real part of Clemson’s rotation in each season, but Brad Brownell’s guard room is a little crowded: Chase Hunter, Al-Amir Dawes and Alex Hemenway.

Brownell has a top-40 recruiting class set to arrive this summer/fall, too. That group includes one additional guard: 3-star shooting guard Chauncey Gibson.

Clemson one of programs after Colgate transfer guard Nelly Cummings