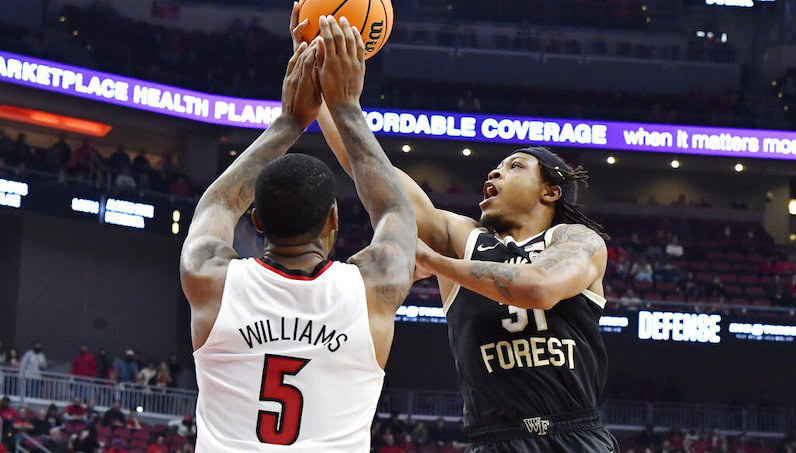 Alondes Williams took the ACC by storm during the 2021-22 season. When Williams committed to Wake Forest, after two seasons with Oklahoma, the combo guard was viewed as a solid, perhaps underrated, addition.

Now, Williams, who was named ACC Player of the Year, will enter the 2022 NBA Draft. Williams made the announcement on his Twitter account.

As soon as the season started, it was obvious that Steve Forbes and the Demon Deacons had something much more grand than an extra perimeter creator. The 6-foot-5, 200-pound guard overpowered opponents with his speed and strength. When opponents shifted their defensive attention to Williams, he used his brilliant craft and creativity as a passer to hit teammates for high-percentage looks.

Williams started all 35 games this season for Wake Forest, which narrowly missed the NCAA Tournament. He averaged 18.5 points (No. 2 ACC), 6.4 rebounds and 5.2 assists (No. 1 ACC) per game.

At times this season, it felt impossible to keep Alondes Williams out of the lane. According to Bart Torvik’s shot data, Williams was 166-of-249 on attempts at the rim (66.7 FG%); close to 73 percent of his makes at the rim came unassisted.

A year ago, Alondes Williams + Jake LaRavia played for different programs. In the span of a few months, they've become one of the most dynamic duos in the country — more on how Wake Forest utilizes Williams + LaRavia, including two-man actions and post-ups https://t.co/cZjXujeUHZ

Williams was an exceptionally busy player, too. He finished Top 5 in this ACC in both usage rate (29.8 percent) and assist rate (31.0 percent).

After a hot start, his accuracy tailed off from downtown. Williams finished the season shooting just 28.4 percent on 3-point attempts; however, there was at least some volume (141 3PA) to speak of.

Williams and Jake LaRavia, another transfer, formed one of the top 1-2 punches in the country. Together, those two helped usher in a new era of Wake Forest basketball.