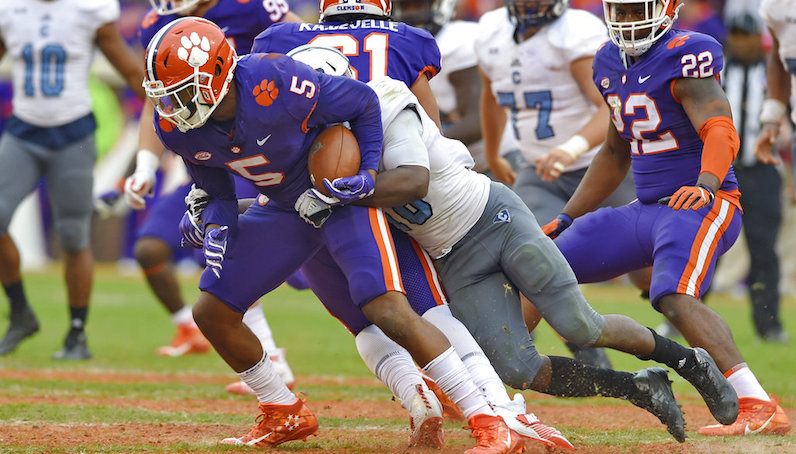 One of the trademarks of the successful Dabo Swinney era at Clemson has been an abundance of talented skill players. Sammy Watkins, DeAndre Hopkins, Andre Ellington, Mike Williams, Martavis Bryant — the list goes on. Several of these guys either suit up on Sundays for your favorite team or your fantasy team.

It looks like more of those pro prospects are on the horizon: Deon Cain, Ray-Ray McCloud, Hunter Renfrow and Travis Etienne. Unsurprisingly, those guys are not alone, though.

All season long we have heard Clemson coaches refer to the exceptional talent of freshman receiver Tee Higgins. Well, in Clemson’s rout of The Citadel, Higgins and his ridiculous skill set were on display, which gave Clemson fans a sight of what is yet to come.

In the win over The Citadel, Higgins hauled in six passes (on eight targets) for 178 yards and two touchdowns — one from Zerrick Cooper and the other a one-handed 78-yard bomb from Hunter Johnson. Both of his touchdown grabs were ones for the highlight reel, too.

The performance by Higgins was a special one; the 6-foot-4 true freshman become just the 22nd second FBS player this season to record five or more receptions for at least 175 yards and two touchdowns, per Sports Reference. The only other ACC player to pull that off this season is Virginia Tech’s star receiver, Cam Phillips.

Higgins, who was a monster prospect coming out of Tennessee in both football and basketball, joined some elite company last weekend, too. Dating back to the 2000 season, this type of performance has happened only 32 other times with ACC players. The other Tigers that have managed to pull this off: Rod Gardner, DeAndre Hopkins, Sammy Watkins, and Artavis Scott. Three of those guys went on to become first round picks.

Higgins has 14 receptions on the season; obviously, it’s not easy getting targets amongst Clemson’s receiver group. The Tigers have targeted Higgins 23 times this season (fourth most on the roster) — 6.6 percent of the team’s attempts, per Football Study Hall. This translates to a pretty good catch rate of nearly 61 percent.

However, like an NBA team that acquires a key rotation player at the trade deadline, Clemson may have found another weapon for the stretch run. The Tigers have a road date with rival South Carolina this week, which will be followed by the program’s third-straight trip to the ACC Championship game. No. 2 Miami awaits.

Cain, McCloud and Hunter Renfrow are all juniors; that trio could all return to Death Valley next fall. Regardless, Higgins looks like he should be a larger part of the receiving package for the Tigers.

The numbers behind Donte Grantham’s super start for Clemson basketball