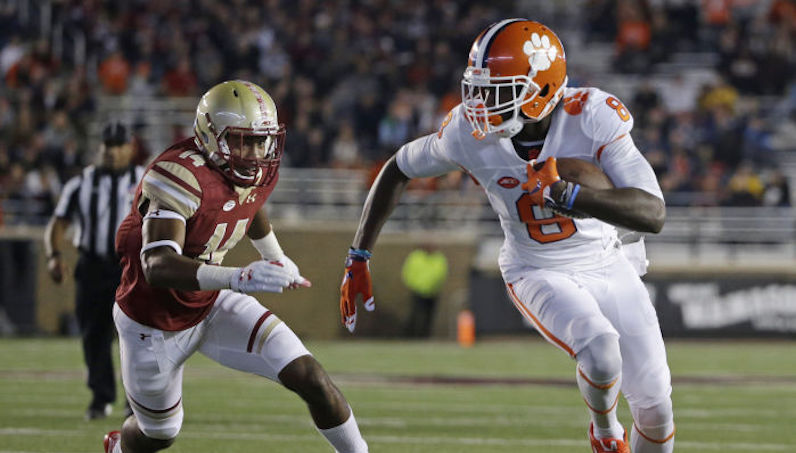 If Clemson can find stability at its quarterback position, big things are in line for this year’s group of wide receivers.

Dabo Swinney and the Tigers have a lot of talent to replace on offense, especially at the quarterback position. Deshaun Watson was arguably the greatest player in the history of Clemson’s football program, and he’s now gone.

Watson wasn’t the only star that Clemson lost, though. Mike Williams was a monster for the Tigers; there’s a reason he went No. 7 to the Chargers in the draft, and finding a way to replace his talents will be the opposite of easy.

This team is also lost three of its top pass-catchers: Mike Williams, Artavis Scott and Jordan Leggett. That trio combined for some pretty remarkable numbers in 2016.

And let’s not forget: in the 2015 season — with Williams injured — Scott and Leggett combined for 133 receptions on 179 targets

Who is on deck?

At ACC Football Kickoff in Charlotte, Dabo Swinney spoke with passion when asked as to how he plans to replace his recently-departed stars.

“Leggett was a mainstay for us, but we’ve got good tight ends. We lost Mike Williams, but we got some pretty good players coming back,” Swinney state. “I’ve got a guy named Deon Cain that’s played at a high level for us. It’s kind of his time.”

So, let’s start right there: Deon Cain was a deep ball ace for the Tigers last season. Over 55 percent of his 38 receptions (21) went 15-plus yards. Cain finished tied for fourth in the league last season with nine touchdown receptions; he was also one of only five players to average better than 19 yards per catch.

According to Football Study Hall, Cain was Clemson’s third-most targeted receiver in 2016 — 70 targets. He hauled in 54.3 percent of his intended targets. That’s not bad, especially once you factor in the vertical nature of his game — deep passes are obviously harder to complete than those that take place closer to the line of scrimmage.

However, if he bumps that number up to above 60 percent, then he could be the best receiver in the ACC — period. Cain averaged 10.3 yards per target in 2016, which is ridiculously good.

With a new quarterback, that may be a big if; however, this could a huge year for Deon Cain.

Prior to the start of the 2016 season, I highlighted Ray-Ray McCloud as a possible breakout candidate. McCloud had some ups and downs last season, but he was a game-change for Clemson, and finished inside the top 20 of the ACC in terms of receptions (49).

McCloud posted a sizzling catch rate of 77.8 percent, which was tops on Clemson’s roster amongst players with at least 30 targets, per Football Study Hall.

It’s very easy to visualize a world where Cain replaces Williams as Clemson’s high-volume vertical threat, while McCloud becomes the new wave Scott — a bubble screen menace from the slot.

It will be a long time before Orange-clad fans forget the performance Hunter Renfrow displayed in the title game win over Alabama; in fact, I’m sure the bards in Tiger Town are still singing his praises.

Renfrow was targeted a game-high 14 times; he hauled in 10 of those balls for 92 yards and touchdowns, including the dramatic game-winner with one second left. (With an assist to a diving Artavis Scott.)

In total, Renfrow caught 44 of the 64 passes thrown in his direction — a catch rate of 69 percent.

A redshirt junior from North Carolina, Trevion Thompson stands to benefit a great deal from an increased role, too.

Thompson has only 21 receptions over his first two seasons in uniform, but that’s come on just 29 targets — for a catch rate of 72.4 percent. The 6-foot-2 wideout has the ability to make plays. Per cfbstats.com, seven of his 11 receptions in 2016 went for first downs.

With the departure of much from the top of Clemson’s food chain, Thompson should be prepped to become a much bigger part of the passing attack.

Can Clemson continue its dominance over USC sans Watson?

For the second straight week, 7 ACC football teams landed in the AP Top 25…