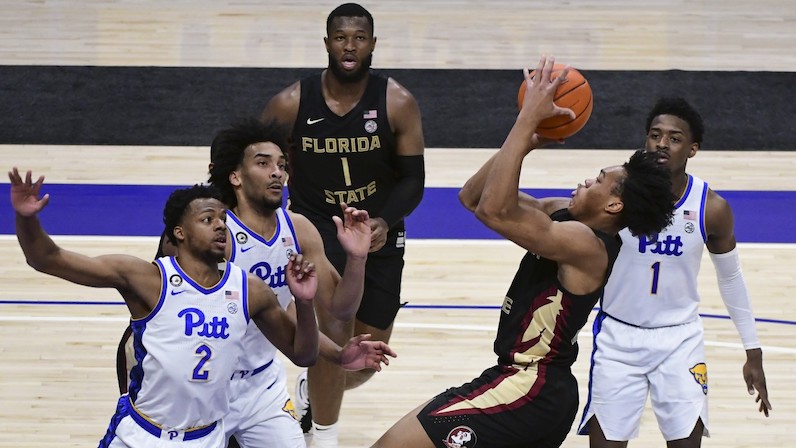 As Leonard Hamilton and Florida State grind for a second straight ACC title, there are a lot of things to like about this team. (There’s a lot to celebrate with this program, just in general, which continues to be one of the bright spots along the college basketball landscape.)

Florida State is long and rangy; Hamilton’s club once again ranks as the tallest team in the country, according to KenPom’s average height metric.

As is customary, FSU is incredibly deep: the bench accounts for 40.5 percent of the team’s minutes this season (No. 21 nationally). Florida State’s pipeline to the NBA continues to hum with both one-and-done lottery studs — Scottie Barnes — and player development success stories, like RaiQuan Gray.

Similar to a season ago, FSU switches everything defensively, too. That takes more than pure athleticism and switchy defenders; this requires high-level communication and feel on the defensive side of the floor. When it comes to these attributes, Florida State is elite. It was jarring to see Florida State’s defense short-circuit everything Virginia wanted to do when the Cavaliers got blasted by 21 points in Tallahassee.

We shouldn’t take stuff like this for granted. This is rare. It requires tremendous amounts of work from every player on the team, along with Hamilton and his wonderful staff.

However, this FSU squad is doing one thing slightly differently. With Barnes and Gray pushing the pace, this is the best 3-point shooting team of Hamilton’s successful run in Tallahassee.

Similar to their collective prowess on the defensive side of the floor, the creation of Florida Stat’s 3-point arsenal is a team-wide effort. Led by MJ Walker (47 3P%), Sardaar Calhoun (44.4 3P%) and Anthony Polite (45.6 3P%), FSU has drilled 39.3 percent of its 3-point attempts this season. If the season were to end tomorrow, this would be the highest 3-point shooting percentage ever for a Hamilton-led FSU team

This, however, tells only part of the story.

(I love this little abbreviated elevator door BLOB design from FSU; Walker sneaks through the doors/screens, while RJ Davis is stuck in the lobby waiting for the car.)

According to Synergy Sports, Florida State ranks No. 1 nationally in efficiency on catch-and-shoot attempts: 65 percent effective shooting on 286 FGA.

Look at the ball move here; Walker gets this 3 from the second side of FSU’s go-to Ram Spain/Stack pick-and-roll action.

This spot-up shooting success is a testament to the creation efforts of Barnes, Gray, Walker (a missile driving on a straight line) and RayQuan Evans. Their collective slash-and-kick abilities are the catalyst for this catch-and-shoot machine.

Open 3-point looks don’t create themselves. Defenses must be bent or moved to generate the necessary advantage. This is one of the beautiful aspects of basketball, a team game that rewards connectivity. Barnes and Gray have combined to make just 17 3-pointers all season: 17-of-60 3PA (28.3 3P%). But those two are central in helping create the nation’s top spot-up shooting attack.

Although, it certainly doesn’t hurt to have productive after timeout (ATO) designs from Hamilton and hall-of-fame assistant coach Stan Jones.

(I absolutely adore the Gray-Balsa Koprivica big-big pick-and-roll; it’s one of the more fun two-man actions in college hoops. Koprivica is an excellent player, and we need to start kicking the can on his eventual NBA prospects.)

To be clear, some of this is shooting luck in a relatively small sample (19 games). However, with the departure of lead guard Trent Forrest, along with lottery picks Patrick Williams and Devin Vassell, it’s impressive to see Florida State’s increases from deep.

Gray dramatically improved his fitness for the 2020-21 campaign. He looks downright bouncy this season, while continuing to evolve as one of the country’s top stocks players: 2.3 steals and 1.4 blocker per 40 minutes. It’s also been a benefit for his offense; Gray’s turnovers are down this year (21.6 TOV%).

Barnes is wildly intriguing NBA prospect — a massive playmaker (7-foot-2 wingspan, 230 pounds) who sees the floor, and plays with really good feel. The jumper remains a bit of black box (50.7 TS%). I’m skeptical of Barnes’ functionality as a primary creator at the next level, though I believe in his ability to do damage as secondary playmaker.

His passing talents and unselfish, team-first nature are real. Barnes sees opportunities before things fully develop — whipping passes all over the court with incredible vision.

Barnes is capable of throwing a big guy open on a transition rim run or skipping passes to the weak-side corner for open 3-point looks.

With certain limitations, it’s hard to see Barnes as a creator that runs dozens of pick-and-roll possessions every game on the next level. He seems better suited to make plays on the short roll, in transition or from the high post.

The vibes are clearly very good; it must be a lot of fun to play with Scottie. That stuff matters. I still have Barnes as a lottery pick.

(More thoughts on Barnes as a defender in this piece I wrote last month, along with Kadary Richmond, Reece Beekman, Day’Ron Sharpe and Shakeel Moore. Long story short: Barnes is a good defender that can really rebound without mindlessly hunting for the ball; he boxes out. As a one-on-one defender, Barnes has good moments vs. smaller, twitchier ball handlers, but there are bad lapses, too.)

Wait, Turn Back The Clock

Over 36 percent of Florida State’s field goal attempts this seson are of the 3-point variety. That 3-point attempt rate isn’t exceptional: FSU ranks 218th nationally in the statistic. It’s also largely consistent with where Florida State’s existed the last handful of seasons. FSU is on pace to finish with a 3-point attempt rate above 35 percent for the fourth straight season.

That’s a more recent trend, though. For the majority of Hamilton’s tenure, FSU has usually landed in the low 30s in terms of 3-point attempt rate percentage, although there’s a rather fascinating outlier here.

As a team, 38.3 percent of Florida State’s points came on 3-pointers that year, which ranked No. 7 nationally and still remains (easily) the highest mark of Hamilton’s run.

The 2003-04 season marks the only time that one of Hamilton’s teams eclipsed the 40-percent benchmark. The second highest mark occurred during the 2018-19 season: 37.7 percent.