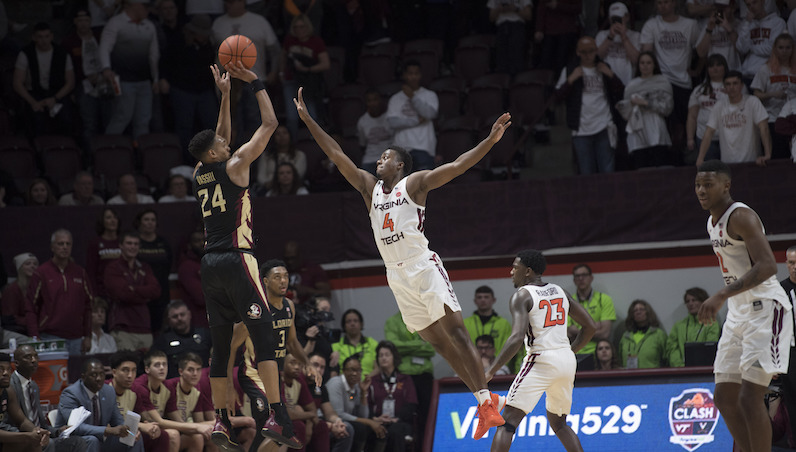 From unheralded to underrated to possible lottery pick in 2020: Florida State’s Devin Vassell declares for the 2020 NBA Draft.

After a solid freshman season in a reserve role, Vassell emerged as a star for FSU; during his sophomore season, Vassell played elite-level defense, while helping power Florida State’s offense with efficient, low-mistake basketball.

According to Synergy Sports, Vassell posted an effective shooting rate of 61 percent on catch-and-shoot attempts this season. In terms of efficiency, that number ranks fifth overall in the ACC among players with 75 or more possessions.

After another turnover-free performance, Vassell remains at 16 TOV total this season, in 594 mins — 1.08 TOV per 40 mins https://t.co/2PIoA6UiYj

However, it wasn’t just Vassell’s spot-up shooting that stood out; over the offseason, he worked on his craft as a pull-up shooter. With a high release point, Vassell shot 38.3 percent (40.7 eFG%) on off-dribble jumpers this season, per Synergy.

A wildly intriguing 3-and-D prospect, Vassell is an elite help defender, which really adds to his upside as an NBA prospect. Vassell finishes his career with a block rate of 3.9 percent and a steal rate of 2.9 percent — a monster combination.

With his incredible wingspan and defensive instincts, Vassell turned into a monster at blowing up handoff exchanges. If a ball handler entered his general vicinity, Vassell was a threat to knock the ball loose, or simply take it.

It was Vassell’s efforts as a team defender — covering 1-5, strong-side digs, back-side help efforts to deter lob passes — that unlocked Florida State’s nasty 1-5 switch scheme this season. There’s a case to be made that Vassell was the most important defender in the country this year.

This has all happened so quick; in the span of two years, Vassell has gone from a top-200 prospect in the 2018 recruiting class to a possible top-10 pick in the 2020 NBA Draft. That’s miraculous.