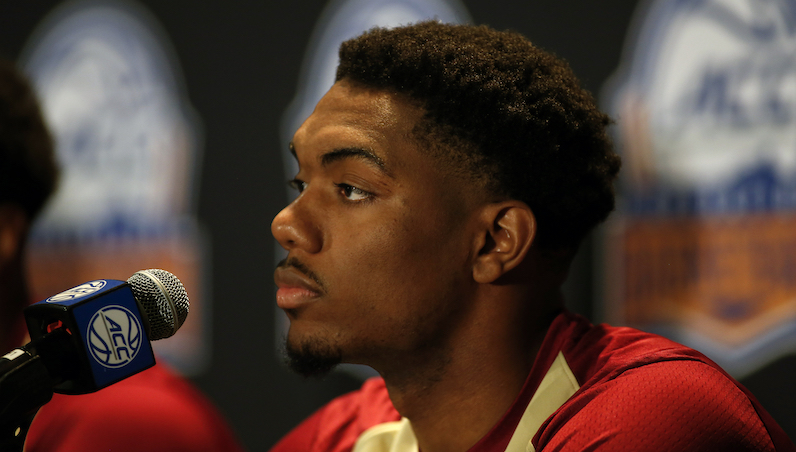 The last time we saw Florida State and Trent Forrest on a basketball court was about seven months ago. FSU fell in a hard-fought Sweet 16 contest with Gonzaga; despite playing with an injured toe, Forrest was incredible in the game. In the final game of his junior season, Forrest was a beast: a game-high 20 points (8-of-11 FGA), five rebounds, four assists, three steals and a block.

As his senior season gets ready to launch in Tallahassee, Forrest was a part of the Florida State contingent at ACC Media Day in Charlotte.

Brian Geisinger: Going back to the NCAA Tournament last season, in the Murray State game, you guys throw like six or seven different defenders at Ja Morant, including yourself. Was that the game plan — to wear Morant down with a handful of long wing defenders — or was that just switching and stuff that happened in the run of play?

Trent Forrest: I would say was just more the flow of the game — just how things shaped up with transition defense. It was more of a flow thing, not really our main game plan against him. That wasn’t it. It definitely helps when you have guys that can interchange like that. You may look up and have Terance [Mann] — who was our 3-man or 4-man — guarding the point guard for another team. It’s just good to have guys that are interchangeable. That way, you don’t have to worry about “Oh, this man is my man,” you can just flow right into your defense.

What’s ahead for Devin Vassell?

BG: Speaking of interchangeable wings, just how good can Devin Vassell be? It feels like you two should work well together this season — on both ends of the floor.

TF: I think the sky is the limit for Devin — I really do. When the coaches were getting ready to redshirt him his freshman year, I was like, “You can’t do that; he can help us.” That’s when I first saw something in Devin. I feel like he’s going to be able to do whatever he sets his mind to — the NBA, whatever it is he can do whatever. He’s going to be a star in the ACC — whether it happens this year or next year, whenever — but he’s definitely going to be a star.

Really like Devin Vassell of @FSUHoops as a 3-and-D prospect, one of the more intriguing players in the ACC this season. In 18-19 — all 26 of his 3s were assisted, Vassell at 72 eFG% on catch-and-shoot FGA. Some looks at Vassell shooting on the move: fluid shot, relocation skills pic.twitter.com/iTCrP78CsT

BG: Sticking with the NBA, was that something you considered after last season? I don’t believe you tested the draft waters. Did you just know that you wanted to come back Tallahassee for one more season?

TF: I thought about it, but just having my toe injury, I was like, “There’s no point.” Because I’d be out for the summer anyways; I had my surgery like right after the season, so I would’ve been out for most of the pre-draft stuff. I might as well just rest my body, get healthy, come back for the next year. The coaches talk to us all of the time; they wouldn’t want to mislead us to something that probably wouldn’t be beneficial. I definitely thought about it, and maybe if I’d stayed healthy, I’d probably have tested the waters just to see where stuff is at. I got a lot of trust in our coaches; they know plenty of guys at the next level.

BG: And you’ve played with a lot of those guys, too. You arrive to FSU in 2016 — there’s Jonathan Isaac, Dwayne Bacon, Mfiondu Kabengele, Terance Mann. Back then, were you able to look around and think, “Wow, there’s like five or six NBA players on the practice floor right now”?

TF: [Laughs] That is crazy. If you told me that my freshman year, I would’ve told you that you’re being crazy; you don’t know what you’re talking about. [Jokes] Like, you must not be watching what I’m seeing.

But now, definitely. It goes to show you the coaches here and their ability to develop. You know during that timespan, that you’re going to develop, eventually, and be able to compete for a spot in the NBA. You have Christ Koumadje on an Exhibit 10 with the [Philadelphia] Sixers. You’re going to get your foot in the door somehow.

Coming into this season: Healthy, ready to let it fly

BG: You mentioned the toe, so how’s it feeling?

TF: It feels a lot better. Now, it’s just getting my strength back in it, and getting some of the cartilage — which built up — breaking it down so that I can be free, and get that strength back. Other than that, it feels great. The surgery went well; it was a very quick process. I feel really good.

BG: Other than resting up, healing from the surgery, was there any other main offseason objective? Was there something you wanted to add to your game before your senior year?

TF: Confidence in my shot, that’s all. That was the only thing I was focused on all summer.

BG: Because Terance Mann made a big jump with his perimeter shot from his junior year to his senior season, too.

TF: Yeah, exactly. We went through kind of a similar situation. Terance, after our Elite Eight year, had surgery on his groin, so he was out. All of that time he was out, he was focused on his shot — form shooting every day, every day, every day. That’s when I was healthy, so I would just watch. Then the season happens, and he shoots close 40 percent (on 3-pointers). And then I get hurt, and it’s the same thing. That’s kind of what my coaches preached to me: look at what Terance did. And I had a longer time — I was out a longer time than he was — so I was able to get more reps, more feel for just how I want my shot to be. I feel like now, through the preseason, I’ve shot very well.

It’s the Year of the Point Guard in the ACC

After falling to Gonzaga, Virginia basketball has found a groove with a spacey offense and…