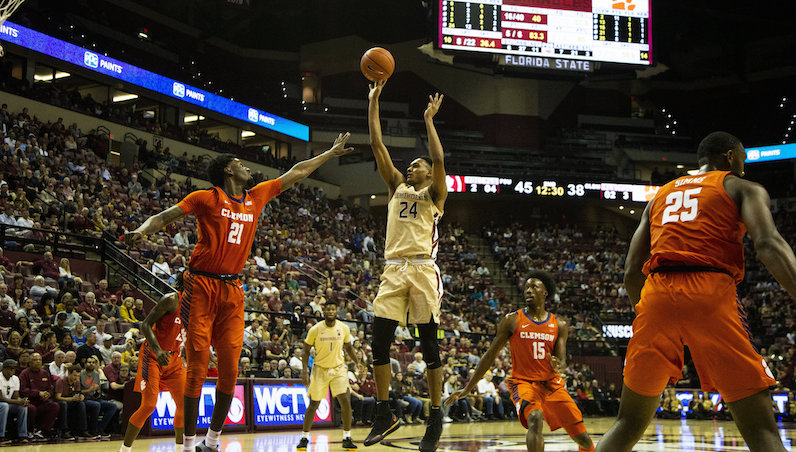 With the No. 11 pick in the 2020 NBA Draft, the San Antonio Spurs selected Devin Vassell out of Florida State. Vassell is the second Florida State player drafted tonight; the Chicago Bulls picked Patrick Williams with the No. 4 selection.

A year ago, not too many people knew about Vassell — outside of FSU basketball fans and draftniks. During his freshman season, Vassell averaged under 11 minutes per game. On a limited sample, though, Vassell posted high blocks and steals rates, while shooting well from deep (26-of-62 3PA).

However, Vassell wouldn’t remain under the radar for too much longer: the 6-foot-7 wing flew up draft boards this season as his stock grew and grew.

According to Synergy Sports, Vassell shot 38.3 percent (40.7 eFG%) on off-dribble jumpers this season. Once again, he was very good shooting off the catch, too: 61 eFG% on catch-and-shoot attempts. In terms of efficiency, that ranked fifth in the ACC — among players with 75 or more possessions.

While the offense was certainly a boon for Vassell, it’s his defense that really boosts profile.

Vassell emerged as a ball-hawking terror in Florida State’s pressure-packed switch-all defense this season. A combination of long limbs and twitchy reactions, Vassell turned into the top team defense in college basketball.

From the weak side, Vassell would dig hard — Kawhi Leonard-style — to threaten drives from 25+ feet. When opponents looked to post against FSU, including possessions when Trent Forrest was switched on an opposing center, Vassell broke on lob passes, disrupting all kinds of action.

For his career, Vassell finished with a block rate of 3.9 percent and a steal rate of 2.9 percent — a monster combination.

Vassell is an excellent two-way player; however, there are some limiting concerns, too. He’s skinny and not super explosive — at least in terms of his first step, first dribble. While high-flying in transition, Vassell didn’t get to the rim much in the half court: 22-of-38 FGA (55.3 FG%). There just isn’t much volume there.

During his career at FSU, Vassell was also a low-mistake player; he coughed up just 1.1 turnovers per 40 minutes this season. That’s a tiny number, and impressive given his increased play-making share.

However, Vassell still posted a lower usage rate of just 20 percent, while attempting only 3 free throws per 40 minutes.

Vassell isn’t sticky with the basketball; he has impressive passing flashes, too. But his ability to crack a defense or create for teammates off of a live dribble is what will likely determine his ceiling as an NBA player.

Vassell is (highly) unlikely to ever function as an offensive alpha or primary creator, but will he ever be able to do more than work as a spot-up shooter? Is there second-side creator potential to tap into? For now, that’s a bit of mystery.

Again, Vassell is an unselfish player with underrated vision. Vassell can be an impact player even without drastic improvements as a playmaker. Assuming the shot and defense translate: 3-and-D wings are the most coveted of role player-type assets.