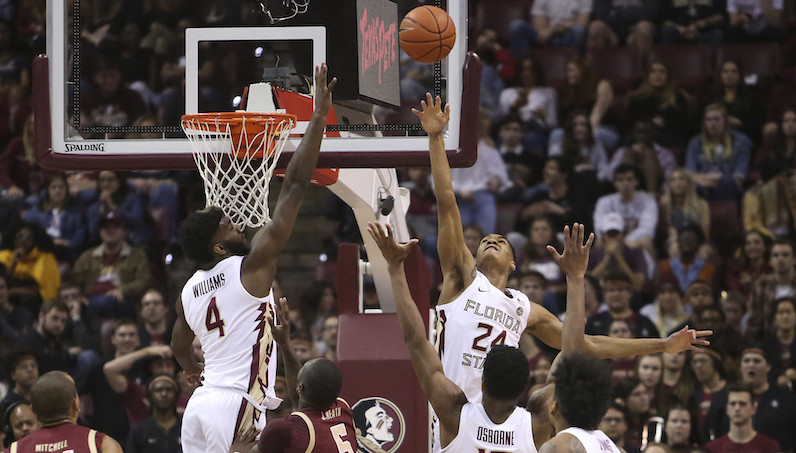 After one season at Florida State, Patrick Williams is headed to the 2020 NBA Draft. On Thursday morning, the 6-foot-8 Williams declared for the draft.

Williams put together an excellent freshman campaign, too. A key cog in Florida State’s switch-all defense (No. 15 nationally in adjusted efficiency), Williams checked all five positions at times; the freshman forward also averaged 9.2 points, 4 rebounds, 1 block and 1 steal per game.

Florida State’s Patrick Williams just declared for the 2020 NBA Draft. Averaged nine points per game for the Seminoles, major upside prospect. Could be one of the steals in this draft.

Williams, a blue-chip recruit from Charlotte, took no issue with coming off the bench for Leonard Hamilton. His desire to buy-in with that concept worked wonders, too. Williams was named ACC Sixth Man of the Year, and that ability — to be coached — speaks volumes for his development on the next level. That may seem small, but it matters; Williams is coachable and a hard worker.

He’s raw offensively, but there’s a lot of potential. Williams shot 32 percent on 3-point looks this season (50 3PA), while also shooting 83.8 percent from the free throw line. There’s very real upside for Williams to turn into a solid 3-point shooter in the NBA; pair that with his length and athleticism (25 dunks), and it’s easy to see why he safely projects as a top 20-25 draft pick.

Patrick Williams: only player in the country this season with 20+ dunks, 80 FT%, 5% block rate

Going back to the 07-08 season: 30 other guys have hit those numbers, including Grant Williams, Thybulle, DJ Wilson, KAT, KJ McDaniels.

As he transitioned to Florida State’s defense — no easy task to assimilate smoothly into a high-intensity 1-5 switch scheme — Williams proved to be an impact defender. Williams was one of only two players in the ACC with a block rate of five percent and a steal rate of two percent.

This type of versatility and team defense makes Williams a super intriguing prospect.

Florida State is about to lose several plus defenders. Devin Vassell and Williams headed to the NBA Draft as early entrants; grizzled veteran guard Trent Forrest is set to leave Florida State, too. That’s a lot to shoulder. However, plenty of perimeter depth returns; plus another blue-chip prospect, Scottie Barnes, will arrive. FSU will still guard: Raiquan Gray and Malik Osborne make for an excellent defensive frontcourt, too.

Thinking out loud: even with FSU losing Forrest and (potentially) Vassell + PatWill (assuming they declare), this is still gonna be an awesome defense next season. Vassell's weak-side help/roving skills were crucial, but this bunch can switch 1-5

Going back to the 2016 NBA Draft, Florida State is on a bit of a run with producing NBA talent. Malik Beasley was selected 19th overall in 2016; a year later, Jonathan Isaac was a lottery selection of the Orlando Magic, while Dwayne Bacon went in the second round to the Charlotte Hornets.

Beasley and Bacon were in the same 2015 recruiting class. Terance Mann, who was also a part of that recruiting class, was a second round selection (No. 48 overall) of the Los Angeles Clippers in 2019.

Forrest and Isaac were a part of Florida State’s 2016 class, which also featured Mfiondu Kabengele. Kabengele was selected 27th overall in the 2019 NBA Draft.

Vassell was the lone freshman in FSU’s 2018 class; Williams was the star of a deeper 2019 class. For the second year in a row, Florida State will have at least two draft picks entering the NBA ranks. (Whether he gets drafted or not, I’d bet on Forrest cracking a roster, too.) This will also mark the third time in the last four years that’s happened.

On top of that, Vassell is a likely lottery choice for this year’s draft. Barnes will almost certainly follow suit in 2021. This is an incredible amount of NBA success from FSU.