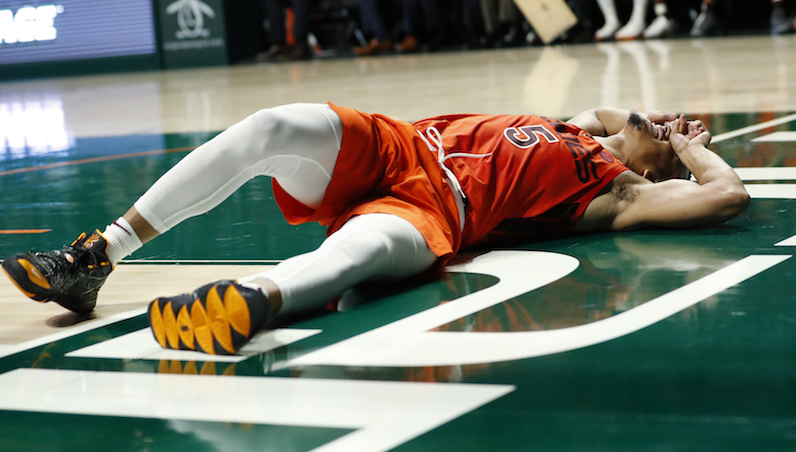 Virginia Tech guard Justin Robinson writhes in pain after a play during the second half of an NCAA college basketball game against Miami, Wednesday, Jan. 30, 2019, in Coral Gables, Fla. Robinson scored 17 points for the Hokies but appeared to hurt his left leg and limped to the locker room midway through the second half as Virginia Tech defeated Miami 82-70. (AP Photo/Wilfredo Lee)

It’s Monday. Time to chug a pot of coffee and get caught up on this weekend’s action and look ahead to tonight — as Virginia Tech hosts Louisville without Justin Robinson.

In the lone ACC game on Super Bow Sunday, things (predictably) didn’t go so well for the Wake Forest Demon Deacons. On the road at Clemson, Danny Manning’s club fell by the score of 64-37.

For the game, Wake shot under 24 percent from the field (26.3 eFG%, 0.6 points per possession). It was an offensive disaster against the Tigers. With Brandon Childress in a slump, there’s simply no reliable production for Wake Forest.

Wake Forest has now turned in two of the 10 worst shooting performances in school history in back-to-back games.

Wake Forest (No. 187 in KenPom) has lost five straight games and falls to 1-8 in the ACC. The Demon Deacons have won just four games since the start of December — two of which came against Charlotte and Cornell.

Monday Night Hoops — 1 game, but it’s a good one

There’s only one ACC men’s basketball game tonight; however, it could be a fun one. Two days after a home loss to UNC, Louisville hits the road to Blacksburg — for a matchup with Virginia Tech.

In its first game without injured star point guard Justin Robinson, Virginia Tech slowed things down and defended like crazy in Saturday’s win over NC State — holding the Pack to 24 points, somehow.

Robinson isn’t expected to play on Monday against Louisville.

today's paper: Believe it or not, the #Hokies @HokiesMBB not only beat a ranked team on the road without Justin Robinson, but that foe scored just 24 points https://t.co/JTopUDvKIJ

On Sunday, it was announced that Florida State has dismissed quarterback Deondre Francois due to allegations of abuse. This is a bad situation.

The Deondre Francois news comes after a video allegedly capturing a domestic dispute between him and a young woman made its way onto social media last night. With him gone, James Blackman immediately becomes the favorite to start.

Tre Jones continues to shine on defense for Duke