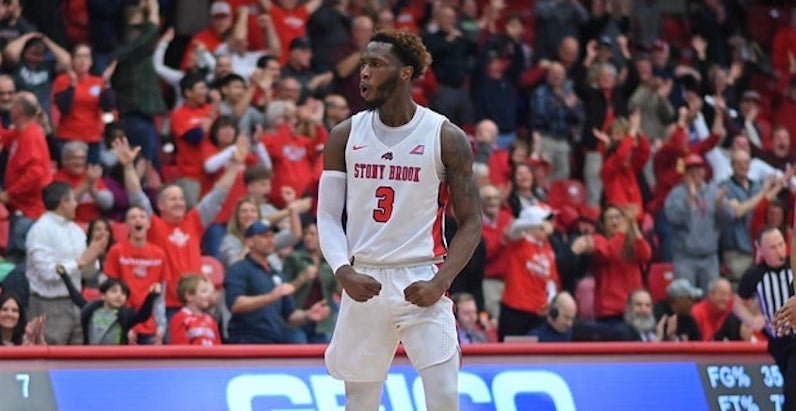 Over the weekend, Stony Brook transfer Elijah Olaniyi committed to Miami. 247 Sports was the first to report the news.

During his three seasons at Stony Brook, Olaniyi appeared in 91 games (64 starts) and averaged 12.5 points per game. As a junior, Olaniyi played his best basketball, too: 18 points. 6.5 rebounds, 2.1 assists and 1.6 steals per game. Olaniyi also shot 36.1 percent on 5.3 3-point attempts per game, both career highs.

Olaniyi has one season of eligibility remaining; he’s expected to sit out the 2020-21 season with a redshirt after his transfer.

The race to land Olaniyi was competitive. Minnesota, Arkansas, Xavier and Nevada all pursued the the 6-foot-5 wing; however, Miami and Jim Larranaga won out. Miami was obviously unable to get Olaniyi on campus, physically, for a visit. But the coaching staff met with Olaniyi over the phone and on a Zoom meeting call.

The All-AEC performer brings some defensive versatility to the table, too: 17.3 percent defensive rebound rate and 2.7 percent steal rate (1.9 steals per 40 minutes). These are impressive numbers for a 6-foot-5 wing. It’s easy to see Olaniyi fitting into a couple of different roles in Miami’s offense.

Olaniyi can play on the basketball or, with his ability to stretch the floor and work the defensive glass, function as Miami’s de facto stretch-4. Olaniyi was one of 9 players this season, 6-foot-5 or shorter, to post 17 percent defensive rebound rate, 2.5 percent steal rate and 35 percent shooting on his 3-pointers.

According to Synergy Sports, Olaniyi shot 46.4 (51.8 eFG%) out of isolation this season (28 FGA). Olaniyi was used more frequently as a spot-up threat, scoring 1.12 points per possession (55.4 eFG%) on no-dribble jumpers in the half court.

Out of the pick-and-roll, Olaniyi’s efficiency was more middling; however, he used 80 screen-roll possessions this season, which is decent volume. In Miami’s offense: the more players that can operate pick-and-roll, the better.

Olaniyi is the third addition to Miami this offseason. The Hurricanes also bring in a solid 2020 recruiting class with 4-star forwards Earl Timberlake Jr. and Matt Cross.

After the 2020-21 season, Miami will lose a lot of talent: Chris Lykes, Kameron McGusty and Nysier Brooks. Veteran frontcourt pieces Rodney Miller and Sam Waardenburg, another stretch-4, are also seniors. Playing time and some sort of role will be available to Olaniyi.