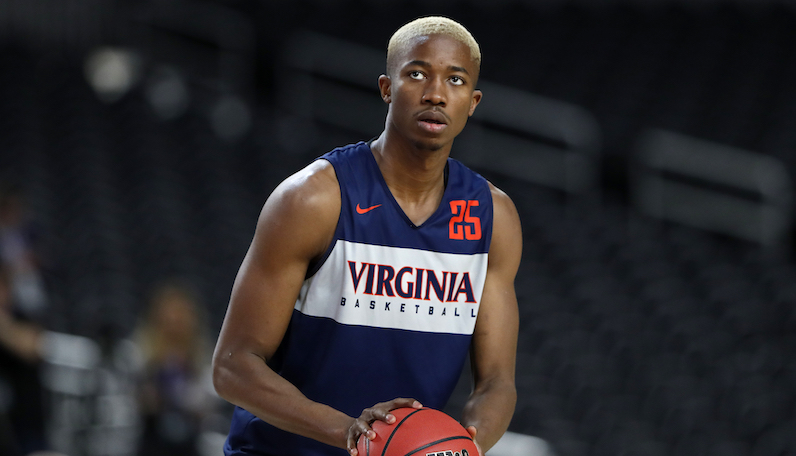 Turnover will be high next season for Virginia Basketball, no doubt; however, it won’t be a completely new cast of characters at JPJ. De’Andre Hunter, Ty Jerome and Kyle Guy are all headed to the NBA; Jack Salt has exhausted his eligibility, too. But as UVA looks to defend its 2019 title, the Cavaliers will again have the services of center Mamadi Diakite, which is big news.

After going through the NBA Draft process, Diakite announced his decision to return to school for his senior season — just before the NCAA’s deadline.

As a junior, Diakite emerged as an impactful two-way asset. Defensively, Diakite isn’t just a system player; he’s long and rangy, and one of the best shot-blockers in the country. After posting a four percent block rate during the 2017-18 season, Diakite upped his game this year — finishing the season with a 10.2 percent block rate, a top-25 number nationally.

In ACC play, Diakite’s block rate spiked to 12.3 percent, which was No. 1 in the conference during league action. Overall, Diakite — who started 22 games (21.8 minutes per game) — averaged three blocks per 40 minutes.

Because of his length and quick hops, Diakite has the ability to attack the ball once it’s in the air. He also has the dexterity to reject shots with either hand.

The departures of Hunter, obviously, Jerome and Salt are hits for Virginia’s defense. However, with Diakite back, Braxton Key and Tony Bennett’s system, Virginia should be just fine on that end of the court.

While Diakite’s defense made a jump, so, too, did his offense. During Virginia’s title season, it became clear that Diakite was the best two-way option for Tony Bennett at center. Salt brought defense and leadership, but his offense was usually hard to find. Jay Huff, on the other hand, offers a wonderful skill set offensively; however, he isn’t there yet in terms of screen-roll defense and positioning.

Diakite (10.5 percent offensive rebound rate in ACC play) allowed Virginia and Bennett to optimize its lineups on both ends of the floor. He was the ideal blend of offense and defense.

With Virginia adjusting its offense and moving to more spread pick-and-roll, Diakite had to take on a new role this season. He embraced that shift, and became one of the top rim-runners in the ACC. Diakite is comfortable moving in space, and he has good hands, too.

When the time comes around again, these are traits that should serve Diakite well as an NBA prospect. Every team in the league is looking for (relatively) cheap options at center that can protect the rim, defend pick-and-roll and dive to the basket on offense. This is Diakite’s ticket.

On offense, Diakite shot 72.5 percent overall at the rim and finished the season with 32 dunks — both of which are solid numbers. Nearly 75 percent of Diakite’s rim field goals were assisted.

During the 2018-19 season, Bennett opted to play most of his lineups with Hunter or Key as the team’s nominal 4. Both of those guys are long and rangy and active; together, they allowed UVA to maximize its athleticism. Key and Hunter played together plenty (sometimes as a small-ball 4-5 pairing), too, but as a platoon, they worked splendidly.

Hunter was an offensive mismatch with basically everyone he faced last season — save for Zion Williamson. (As it turns out, that Zion fella is pretty special.) And Key is an excellent defensive rebounder: 23.4 percent defensive rebound rate, a monster number.

With Hunter gone now, but Diakite and Huff back, don’t be surprised to see more dual-center lineups from UVA in 2020, especially with Huff’s ability to lift a defense (45.2 3P%).

Bennett still played lineups with two centers on the floor this season, too. Famously, in the Elite Eight overtime win over Purdue, UVA leaned heavily on Diakite-Salt lineups. Those guys combine to play 76 minutes in that contest.

A few weeks prior, in Virginia’s penultimate regular season game, the ‘Hoos wiped the floor with Syracuse — scoring 1.33 points per possession (18-of-25 3PA) and assisting on 75 percent of their field goals.

Now, Jerome was the lynchpin to that ridiculous offensive outing. Virginia shredded Syracuse’s zone by flashing Jerome to the nail, and having him reverse dribble to pull 7-foot-2 Paschal Chukwu away from the rim.

This performance came against a zone, and it certainly helped to have the shooting gravity of Jerome, Guy and Hunter out on the floor, too. However, this is something UVA can look to build around for next season.

Going forward, Key will likely vacillate between the 3 and 4 for Virginia. The thought of a Key-Diakite-Huff frontline is awfully tempting, though. In terms of height and length, that looks like the outline of an NBA frontcourt. Again, Huff needs to improve defensively, but all three of those guys averaged more than one block per 40 minutes. This could look really scary for opponents going against Virginia’s Pack Line.

Diakite’s speed and athleticism allow him to chase ACC forwards around the court, and Huff’s range would — hypothetically — allow UVA to space the floor with four shooters. The key to all of this (pardon the horrible pun) will be Key’s development as a spot-up shooter.

If he finds a way to improve his 3-point stroke (30 3P% for his career, 47.8 eFG%), the calculus becomes way easier for Bennett to work out. (Of note: UVA is one of the top player-development programs in the country. This isn’t out of the question.)

Regardless, next season will be a bit of an adjustment for Virginia. The Big 3 era of UVA Basketball is over. But with Diakite back and on a mission, the Cavs will feature one of the best rim-to-rim centers in all of college basketball.