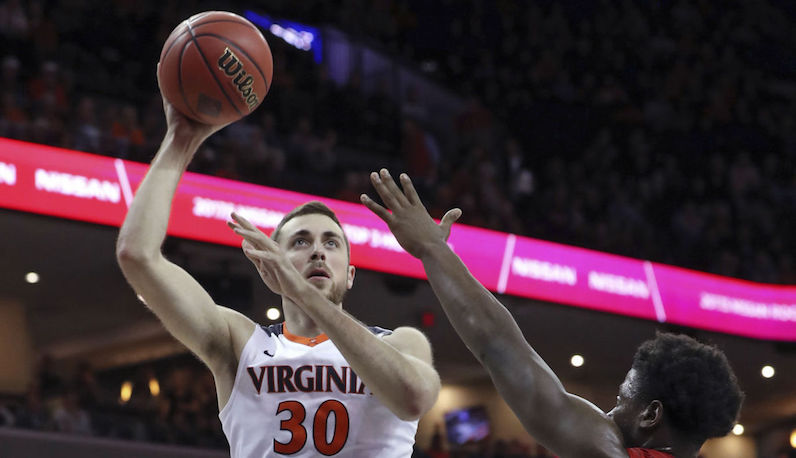 Jay Huff of Virginia get his career off to a very good start against Austin Peay. (Andrew Shurtleff, The Daily Progress)

The long-awaited debut of Jay Huff turned out to be worth the delay for Virginia fans. A glimpse of Huff, the 7-1 redshirt freshman from Durham, put on display some of the guard-like skills and shot blocking ability that had become something close to legendary in UVA circles during his redshirt season.

It also added some entertainment value to a game against an overmatched Austin Peay team that was a blowout pretty much from the start. After not playing in the season-opener versus UNC Greensboro, Huff came off the bench to hit 7-of-8 field goals, for 16 points while grabbing four rebounds and blocking five shots.

It’s hard to say whether Virginia fans should take comfort in it or not, but sources indicated Huff sitting out against UNC Greensboro had more to do with finding himself in Tony Bennett’s dog house than the “matchup” issues cited after that game. The good news is the coaching staff wasn’t actually concerned with Huff’s ability to produce against a low-major opponent. The bad news is Bennett is a no-nonsense man when it comes to discipline and Huff needs to watch himself from here on out.

That’s not to say matchup issues won’t arise as the season goes on. Think back to Mike Tobey’s career at UVA to get a sense of what Huff’s minutes might look like in 2017-18. Tobey, who wasn’t quite as skilled on the perimeter as Huff, but perhaps a bit more capable of banging with big men underneath, never averaged more than 18.1 minutes a game at Virginia. His minutes could vary quite a bit depending on the opponent.

You can probably expect something similar with Huff, though don’t be surprised if he plays more than 20 minutes per game with a relatively thin Cavaliers frontcourt.  He’s gotten much stronger since arriving in Charlottesville and as much as he could struggle defensively with some of the ACC’s more rugged big men, he’s a matchup program for opponents as well.

Huff could prove to be one of the best outside shooters in the conference, and that one-footed, turn-around jumper he nailed Monday night was the kind of move to make NBA scouts salivate.

He needs to keep his focus, both on and off the court, but Huff could very well make a huge difference for the Cavaliers as they try to make a fifth consecutive NCAA Tournament.