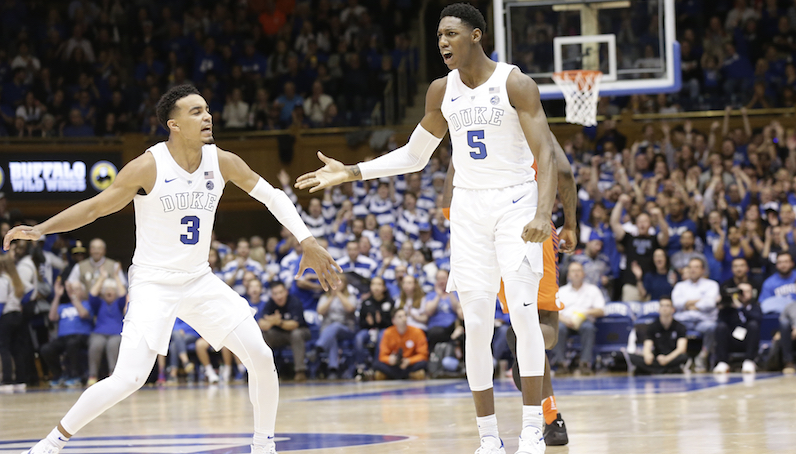 Duke's Tre Jones (3) and RJ Barrett (5) react following a basket against Clemson during the second half of an NCAA college basketball game in Durham, N.C., Saturday, Jan. 5, 2019. (AP Photo/Gerry Broome)

In this week’s Benchwarmer Notes, we take a look at Duke’s defense — possibly with Tre Jones — could cause havoc for Georgia Tech, Virginia Tech’s offense against Syracuse’s vaunted 2-3 zone and NC State looking to turn things around.

Tre Jones could be big trouble for Georgia Tech

It’s still unclear whether or not Tre Jones will play on Saturday, but on Friday he was labeled as probable; Mike Krzyzewski hopeful he will be able to give it ago.

Even if Jones doesn’t play, Duke’s defense could spell all kinds of trouble for Georgia Tech. Duke ranks No. 1 nationally in steal rate (13.7 percent) and second in block rate (18.3 percent), per KenPom. Jones, Zion Williamson and Cam Reddish all average over 2.7 steals per 40 minutes.

Yesterday, I explained why I’m not abandoning ship on Virginia Tech. Turns out, it’s really hard to win in Charlottesville and Chapel Hill. This Virginia Tech team is thin right now, but the skill and shooting is so undeniably good — I still like the Hokies, a lot.

That said, I will be fascinated to see how this crew holds up against Syracuse’s 2-3 zone. With all of its 3-point shooting and guard play, the Hokies have scored 1.05 points per possession (57.4 eFG%) against half-court zone defenses this season, per Synergy.

The Hokies did a lot of that zone damage against weaker foes, though, like St. Francis (Pa.) and Central Connecticut. Syracuse, on the other hand, is a different beast. While accounting for minutes played, Syracuse is the tallest team in the country: 79.3 inches.

At 6’6”, Elijah Hughes ranks third in the ACC among players his height or shorter in blocks per game. On Syracuse’s other rim-protector (beyond Paschal Chukwu): https://t.co/VR1cdB7gS5

On half-court zone possessions, the Orange have allowed 0.76 points per possession (44 eFG%). Opponents have scored just 0.79 points per spot-up possession  (43 eFG%). Over 49 percent of opponent field goal attempts against Syracuse have been of the 3-point variety — one of the highest rates in the nation, as teams try to shoot over the top of the zone.

Basketball is a make or miss sport. The Hokies will get looks from deep, and the Orange will contest will length. Can Tech get hot from deep? That could be the difference in Blacksburg.

Can NCSU turn it around, quickly?

Playing in the ACC is a grind. There are a lot of good basketball teams and the schedule is totally unforgiving. NC State finished up a tough road loss at Louisville around 10 p.m. on Thursday night. Well, at 2 p.m. on Saturday — about 40 hours later — State plays host to Clemson (a top-50 KenPom team), which last played on Tuesday, and will now have a pretty serious rest advantage.

It’s now been three full games without junior point guard Markell Johnson, who was injured in the first half against Pitt. State is 1-2 in those games, and the offense has hit a bit of a dip.

There can be a lot of noise in a small sample, and the Louisville game muddies the waters. In Thursday’s loss, the Pack assisted on just 47 percent of its field goals and posted a turnover rate of 30.3 percent.

Kevin Keatts has a nice rotation this season in Raleigh; there’s significant value in having 9-10 guys and no real weak links. That matters. However, Johnson — a pick-and-roll whiz with shooting range (46 3P%) — is the one guy on this roster that can get to wherever he wants on the floor with the ball in his hands. He can shoot off the bounce from all three level (44 eFG% on off-dribble jumpers) and find easy shots for his teammates — 7.7 assists per 40 minutes.

NC State has scored 1.24 points per possession when Johnson has passed the ball out of the pick-and-roll, per Synergy, which is excellent. Braxton Beverly, CJ Bryce and Devon Daniels have had some nice moments over the last three games, but they can’t hit those efficiency levels as a playmaker.

Eye of the storm: Brandon Childress

Things are, um, not going great for Wake Forest this season, if you weren’t aware. After a win over NC State (sans Markell Johnson), Wake dropped two straight games — both on the road: Virginia Tech and Virginia.

Now, those are good teams; the Demon Deacons aren’t supposed to win those contests. However, the loss at UVA was a bit of a joke. At one point, Wake trailed 25-3 under the nine-minute mark of the first half, and the necessary spirit and attention to detail simply wasn’t there. In the half court, Wake’s defenders spun around like they were on barstools — constantly one or more steps behind ball and player movement. In transition, Wake routinely didn’t pick up all five opponents.

It was a bit of a mess in Charlottesville, and the season (8-10, 1-5 ACC) continues to slip further away. Regardless of those results, Wake continues to get good production from Brandon Childress, though.

With a true shooting rate just under 63 percent, Childress is averaging 16.6 points per game. He’s shooting more 3-pointers, getting to the line more frequently (6.7 FTA per 40 minutes) and turning the ball over less (2.6 turnovers per 40 minutes).

Over 59 percent of his field goal attempts this season have come from beyond the arc, and his canned 43.1 percent of those looks. Childress has scored 1.35 points per possession (69 eFG%) on spot-ups this season, per Synergy — a top-40 number nationally.

ACC Bracketology, 1 Number to Know: Huff adds to UVA, Duke hits the glass, Leaky on the rise for UNC