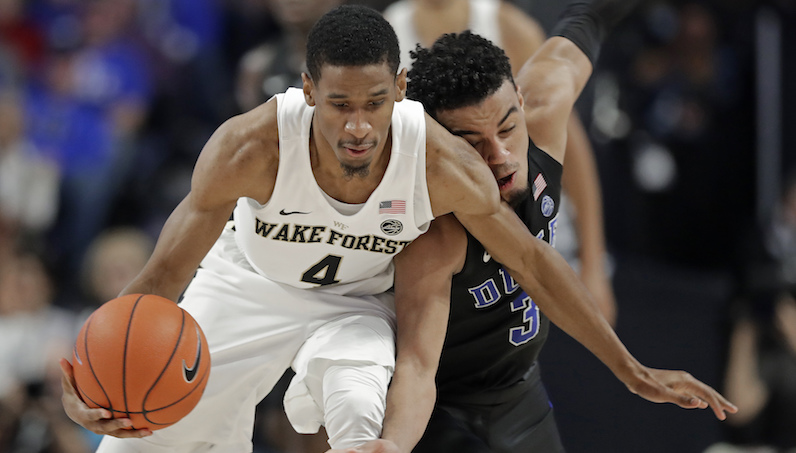 Let’s get you ready for the weekend, which is loaded with seven ACC basketball games on Saturday afternoon and evening. That lineup is, of course, headlined by No. 1 Duke at No. 13 Florida State. Before all of that gets going, though, here’s a glance at this week’s Benchwarmer Notes, which will look at a couple trends, numbers and observations from around the ACC.

It’s been discussed in this space some already this season, but Duke’s rim protection is elite. Currently, Duke ranks second nationally (Auburn’s No. 1) in block rate (19.5 percent) and first in blocks per game (8.2).

People aren't talking enough about how many shots @DukeMBB is blocking this year. pic.twitter.com/L4FpFpknJ9

In six of its 14 games so far this season, Duke (No. 2 nationally in adjusted defensive efficiency) has blocked 10 or more shots. With Zion Williams leading the charge (31 blocks in 368 minutes), Duke has four players blocking two or more shots per 40 minutes: Marques Bolden (5), Javin DeLaurier (3.1), Williamson (2.8) and Jack White (2.6).

Last season, Duke blocked out the sun at the rim by zoning up and using its two frontcourt lottery picks — Wendell Carter Jr. and Marvin Bagley III — to protect the paint. This season, though, Duke is aggressively switching and trapping ball screens. With the ball pressure of Tre Jones, Williamson can hunt steals (emboldened by the fact that Bolden and DeLaurier are at the rim), blow up pick-and-roll action and cause havoc on the weak side. White, who had a career-high five blocks against Wake Forest, is adept at all of that, too.

In addition to the noted blocks and steals, Jack White has added above average ShotValue in 9 (almost 10) of 14 games & in every game shoots 40% of his shots or more from 3

He’s perfect complement to the high usage studs that fill out the remainder of Duke’s roster 😝 pic.twitter.com/0LXNgCKulV

Opponents have scored just 0.96 points per possession (47.4 FG%) on non-post-up attempts at the basket — No. 13 nationally, according to Synergy Sports.

Speaking of Duke’s defense, this must be mentioned, too: Tre Jones and Zion Williamson are collaborating on one of the most frightening plays in college hoops: a defense-to-offense two-man fast break. Jones is one of the top defensive players in the country — a tough-minded guard who plays with supreme focus on that end of the floor (watch his eyes when he guards).

His ability to apply ball pressure (2.5 steals per 40 minutes) triggers so much for Duke defensively, even when he doesn’t directly force a turnover. Frustrated with his activity, Clemson actually stopped having Shelton Mitchell bring the ball up against Jones — instead going with Marcquise Reed or Clyde Trapp.

It’s clear: Duke’s staff has given Zion the green light to gamble and look for steals; he’s more than happy to oblige, too. While the opposing ball handler is occupied, desperately trying to shake Jones, Williamson swoops and, before you blink, it’s time for cameras to snap.

This has happened a few times this season, too, including in arguably Duke’s best win of the season — the comeback victory over Texas Tech (No. 9 KenPom) at Madison Squad Garden.

Buzz Williams and the Hokies forgot to pay the electric bill, apparently, because Virginia Tech had a power outage this week at Georgia Tech: 0.85 points per possession (5-of-27 3PA, 18.5 3P%). It was easily the worst performance of the season for a team that’s evolved into a gorgeous small-ball unit of efficiency.

Even after that performance, Virginia Tech still ranks inside the top five nationally in effective shooting (59.1 eFG%) and 3-point shooting (42.3 3P%). Led my veteran sniper Ahmed Hill, Tech has scored 1.28 points per possession (63.9 eFG%) on catch-and-shoot attempts in the half court, per Synergy Sports.

Let’s look at one way the Hokies sprang Hill (70.3 eFG% off the catch) free for a catch-and-shoot look from a baseline inbounds (BLOB) play. This is serious art. Hill runs the baseline and curls up off a screen from Kerry Blackshear Jr. — away from the ball. However, with his man — D.J. Harvey — trailing, Hill plays a little trick. He sprints back to the corner, toward Justin Robinson, who is inbounding the ball; Blackshear flips his screen, and look at this easy rhythm look for Hill. Splash.

To the Moon(ey) and back

This continues to look like a bit of a rebuilding year for Notre Dame. That may be a tough pill to swallow in South Bend because this is a proud program and last season — ravaged by injuries to Bonzie Colson and Matt Farrell — fell short of lofty expectations. However, this is a part of a natural cycle in college basketball: recruit, development and produce. Occasionally, there will be downturns.

Junior forward John Mooney didn’t get the rebuild memo, though. He’s brought this season. Mooney has become one of the top stretch bigs in the ACC; he’s currently shooting 46.2 percent from downtown (62 percent true shooting). According to Synergy, Mooney has scored a ridiculous 1.75 points per spot-up possession (87 eFG%), which ranks in the top five nationally.

A low-turnover player (9.8 percent turnover rate), Mooney adds efficiency by avoiding mistakes and making up for them as well — 11.2 percent offensive rebound rate.

On the other end of the floor, he’s rebounding well there, too: 28.7 defensive rebound rate, good for 19th best in Division I, per KenPom.

Over in Chapel Hill, freshman point guard Coby White has been a revelation this season. White is tall and super-fast for a point guard, especially with the ball in his hand. The twitchy, attacking guard has turned his this season for his ability to split double teams and also create his own shot — pull-ups and step-back 3-pointers. UNC ranks No. 9 in adjusted offensive efficiency, according to KenPom, and White — along with Cameron Johnson — has helped steer this ship.

So far, White is 28-of-78 on 3-point attempts (35.9 3P%), although as Adrian Atkinson of Inside Carolina notes, his off-bounce 3-point shooting has slumped, slightly, in recent games.

Mamadi Diakite: Making the most of his opportunity

This Virginia basketball team is very good — no duh. Part of that equation is this program’s ability to develop players, and one of the most improved players in the ACC is junior big man Mamadi Diakite.

Already a solid bench contributor during his first two seasons in Charlottesville, Diakite continues to improve on both ends of the floor. The 6-foot-9 Diakite is shooting 61 percent on two-point field goal attempts, and 71.4 percent on non-post-up attempts in the half court, per Synergy. He’s started the last four games for UVA; over that stretch, he’s averaged 23.6 minutes, 9.8 points (65.7 FG%), 5.2 rebounds (1.4 offensive), 1.4 blocks and 1.4 steals.

He was even called for a goaltending violation in the the Boston College win that was really impressive, too. For the season, Diakite is now averaging 3.2 blocks and two steals per 100 possessions. He’s good.