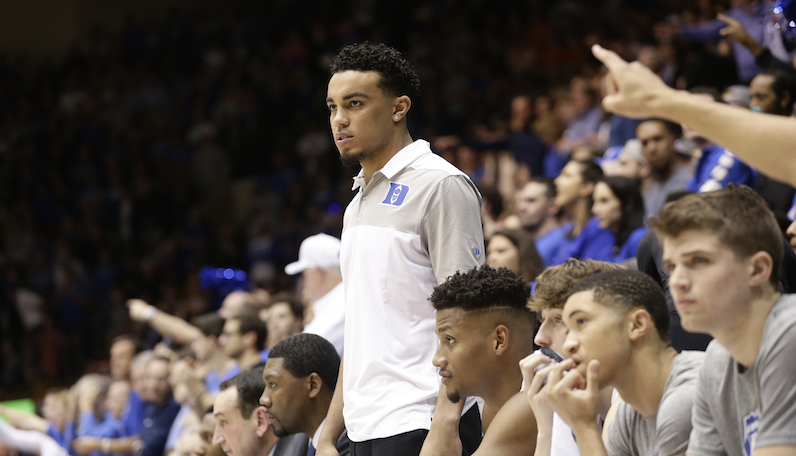 Duke's Tre Jones watches from the sidelines during the second half of an NCAA college basketball game against Virginia in Durham, N.C., Saturday, Jan. 19, 2019. Duke won 72-70. Jones is recovering from an injury. (AP Photo/Gerry Broome)

Less than two weeks after his initial shoulder injury — suffered early in the loss to Syracuse — Tre Jones could be back for Duke. According to Mike Krzyzewski, Jones has made progress since that Monday night affair; he’s probable for Saturday’s matchup with Georgia Tech, which tips at noon.

"Tre is probable for this game… He has really progressed well and hopefully he will be ready to go on Saturday."

Duke won both games in the absence of Jones, including a thrilling two-point win over De’Andre Hunter and Virginia. Zion Williamson and RJ Barrett have shouldered the bulk of the playmaking duties without Jones, too.

On the season, Jones has scored just 8.1 points per game (47.5 eFG%); he isn’t much of a shooter, yet. However, his ability to create easy shots for teammates (7.8 assists per 40 minutes) is critical — in both the half court and transition.

Of course, Jones has really made a name for himself as the spearhead of Duke’s attacking defense. One of the top on-ball defenders in the nation, Jones uses ball pressure to force opponents into inefficient possessions and turnovers (2.8 steals per 40 minutes). The Blue Devils rank No. 1 nationally in steal rate, too: 13.7 percent.

A detailed look into the offensive profile of RJ Barrett