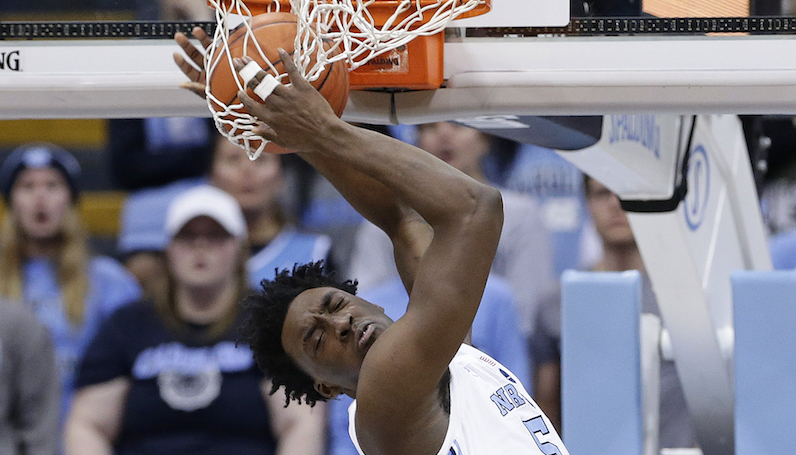 Six ACC teams were in action across three games last night; a lot of that action overlapped, too. If you missed anything, we have you covered. Here’s what happened last night in ACC basketball, featuring Nassir Little, De’Andre Hunter and Wake Forest hanging on over NC State.

What started as a much-hyped matchup of top-10 teams quickly turned into a laugher; Virginia went ham on Virginia Tech, winning at home 81-59. This will go down as one of the better offensive performances of the Tony Bennett era — considering the level of competition: 1.45 points per possession (second most this season), 13 3-pointers and an effective shooting rate of 71 percent.

Virginia now ranks top five in both adjusted offensive and defensive efficiency, per KenPom. After last night’s performance, UVA ranks No. 1 overall in KenPom, which sounds a nationally holiday in Charlottesville (I think).

Virginia Tech wasn’t that bad, honestly; the Hokies ran some nice half-court offense (9 turnovers, 1.05 points per possession), and got some decent outings from key players, like Nickeil Alexander-Walker — 19 points (10 FGA) and three assists. That doesn’t mean Tech wasn’t frustrated, though.

I TOLD YOU. I TOLD YOU KIHEI WOULD GET TO ROBINSON. HE JUST GOT A TECH FOR SWINGING THE BALL AT KIHEI AFTER A TIMEOUT. LOLOLOLOL.

Turn up the Daft Punk and watch one of the best in the ACC work: De’Andre Hunter’s face-up game continues to hum. This is nothing new. Hunter’s efficient offensive game — 57.5 eFG%, 1.4 turnovers per 40 minutes — is multidimensional. However, his ability to face-up from multiple locations on the floor — top of the key, pinch post, baseline — and attack is special: 0.93 points per possession on isolations, according to Synergy.

According to Synergy Sports, Hunter has scored 1.04 points per possession on post-ups (53 FG%) this season, too. He’s shooting over 66 percent at the rim.

Oh, there’s more, though. We all know Dre to be a good 3-point shooter, but this is an impressive hit. Ty Jerome draws an extra defender on a drive, and now it’s time to play simple slash-and-kick basketball. Hunter drills a deep corner 3 against a closeout from Alexander-Walker, a rangy defender and one of the best steals/blocks guys (39 combined steals plus blocks) in the ACC

Less than a minute later, Hunter returns the favor — hitting Jerome, coming off a flare scree, with a dime of a pass.

There’s no relation here to Omar Little, but UNC fans got another taste of what they’ve wanted to see more of this season: The arrival of Nassir Little. Despite the 75-69 victory, this was far from a crisp performance for UNC; however, Little’s effort turned some heads, for the right reasons.

No one will confuse Notre Dame’s defense with that of the Oklahoma City Thunder; the Irish rank 111th nationally in weighted defensive efficiency, although opponents have shot just 49.3 percent in the half court at the rim against them, per Synergy.

Regardless, Nassir Little renders all of that useless with an explosive baseline drive against the 6-foot-11 Juwan Durham. Little goes from stationary to kicking up dust in Durham’s face in a blink.

For the game, Little finished with 11 points (5-8 FGA, everything inside the arc), six rebounds and zero turnovers. Once he’s at the rim, Little knows what to do with it (75.4 FG%).

Most Dunks by a UNC Freshman in the Roy Williams Era:

After losing five of six games, including three in a row to start ACC play, Wake Forest got exactly what the doctor ordered on Tuesday: 71-67 over No. 17 NC State. It was Wake’s first win over a top-25 team in two years.

Wake is 39-41 at home since 2010. We were awesome under Prosser and Gaudio, but guessing most of this is due to our sheer futility on the road.
Cool stat to see though. https://t.co/c8eF3sGjRk

The Deacs led big at halftime — 42-27. Wake Forest even led by 22 points at one time. However, NC State, sans Markell Johnson (lower back), ripped off a furious second-half rally. A Devon Daniels floater tied the game at 58, but Wake got some monster plays for Brandon Childress and Torry Johnson to close it out.

No Markell Johnson proved pivotal for NC State, too. This feels slightly results-based, but when this game got level in the second half, the Pack needed someone to run half-court offense.

Johnson is the one dude on this roster that can reliably get to where he wants with the ball, run effective pick-and-roll (not exactly a strength of Wake’s defense), create his own shot and work to get others open with his dribble, too.

Let me put it this way: NC State shouldn’t have needed Johnson to win in Winston-Salem; however, once this game got tight, his shot-creation abilities were absolutely needed in leverage situations.