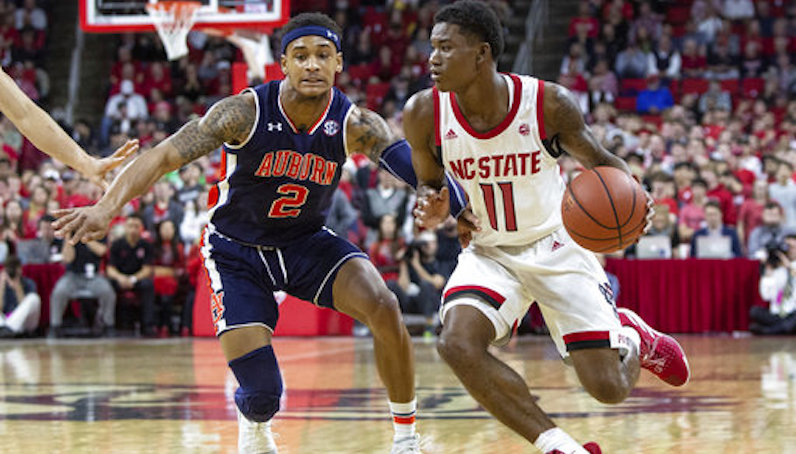 NC State’s 78-71 win over No. 7 Auburn won’t win any awards for style. This wasn’t the most aesthetically-pleasing game, which puts things mildly; the two teams combined for 47 turnovers; NC State turned it over on 28 percent of its possessions, and still managed to prevail.

The Wolfpack scored close to one point per possession, thanks to another strong shooting performance from the floor (62.3 eFG%, 10-of-22 3PA). That offensive initiative was led by point guard Markell Johnson, who continues to dazzle in his junior season.

After leading the ACC in assists (7.3 per game) and assist rate (40.5 percent) a season ago, Johnson has taken his game to another level. Already a solid pick-and-roll creator, Johnson is playing an even more refined game in the 2018-19 season. His improvement as a jump-shooter — from off the catch and off the dribble — has added another gear to his half-court offense.

In the upset over Auburn, this was all on display as Johnson hit a career-high five three-pointers and slapped up 27 points — another career mark. (Every bucket was needed, especially in a game where Torin Dorn scored just six points on six field goal attempts.)

As the engine for one of the country’s top offenses, Markell Johnson knows how to push the pace and run a half-court offense. NC State currently ranks 13th and 17th, respectively, in adjusted offensive efficiency and average offensive possession length (15 seconds), per KenPom.

Nearly 19 percent of NC State’s possessions, according to Synergy Sports, have been spent in transition (1.14 points per possession). Over 20 percent of the team’s possessions have been used by a pick-and-roll ball handler — usually Johnson — or a roll man.

Johnson has been very good at snaking back after a ball screen — cutting back across the line of the screener. He can draw his handle out, which forces the opposing big to make a decision. On this possessions against Auburn, Johnson draws shot-blocking menace Austin Wiley (19.7 percent block rate) away from the rim.

With Beverly spacing out, there’s no tag on Wyatt Walker — a clever screener who knows how to use angles; Bryce Brown doesn’t switch, either, which means the rolling big is open at the win. Johnson threads the needle with his off hand, too.

While on the floor this season, Johnson has assisted on 31 percent of his teammates’ field goals — 9.8 dimes per 100 possessions.

Johnson’s minutes are down this season (23.5 per game), but his efficiency as a scorer is way up. He’s averaging a career-high 13.6 points per game — 23.3 points per 40 minutes. It’s early; Johnson won’t shoot like this all season, but he currently leads the ACC in true shooting rate (73.2 percent).

A big part of this improvement has been the development of Johnson’s pull-up and shot-creation game. This is something we talked about earlier this week with regard to UNC’s Coby White; it’s a critical tool for ball-dominant guards. Look at the confidence for Johnson here to step in and take this season, which he drills. This is something that wouldn’t have happened a season ago.

Johnson gets a lot of his work done after a ball screen; however, he can go get his own shot, too. The Ohio product has speed to burn and a pretty good first step. Johnson can use his herky-jerky crossover moves to showoff the skills and create a rhythm, then it’s go-time.

There’s more balance to his game now. Johnson doesn’t need to force a switch — something he’s adept at doing — then go directly into his speed game. He has the quick-twitch ability to separate from his defender and the confidence to knock it down. According to Synergy, Johnson has scored 1.21 points per possession (60.7 eFG%) on off-dribble jumpers in the half court this season.

However, when he sees a crevice to attack from screen-roll/pop action, Johnson knows what to do. Back to the Auburn game: On this possession, gets a screen going left from Walker. Anfernee McLemore, Walker’s defender, is way out of position in ball-screen defense — spotted too far wide in the opposite direction that screen’s being set.

With the other three players spaced out beyond the arc in State’s four-out system, Johnson sees daylight and uses that as an opportunity to get into the paint. For the season, Johnson has shot 82.4 percent from around the basket, per Synergy — a monster number and a big jump over last season.

Going back to his freshman season in 2016-17 — operating in the shadow of Dennis Smith Jr. — Johnson has come a long way as a range shooter. In his first year of college hoops, Johnson shot the ball very little — 13.2 percent usage rate (19.2 percent turnover rate) and just 11.1 attempts per 100 possessions. When he did shoot, it usually didn’t go in (42.6 eFG%).

With the arrival of Kevin Keatts, Johnson became a full-time starter as a sophomore; still, though, he was an infrequent shooter of the basketball — 12.9 attempts per 100 possessions. Less than 38 percent of his field goal attempts came from beyond the arc, too (4.8 3PA per 100 possessions).

That’s all changed now, though. Johnson, obviously, hasn’t lost his pass-first mentality, but he’s letting it fly way more this season, especially from deep. From the Auburn game: Wyatt Walker initiates a dribble-handoff for Johnson, who hits with ease.

According to Synergy, Johnson has scored 1.54 points per possession (75 eFG%) off the catch this season.

And while those catch-and-shoots are pretty to watch, Johnson’s ability to rise with confidence and knock it down from deep off his own dribble is incredible impressive.

Starting the NC State game after the Hornets wrap up, checking the score though, and I've been trying to tell y'all: Markell Johnson is really good.