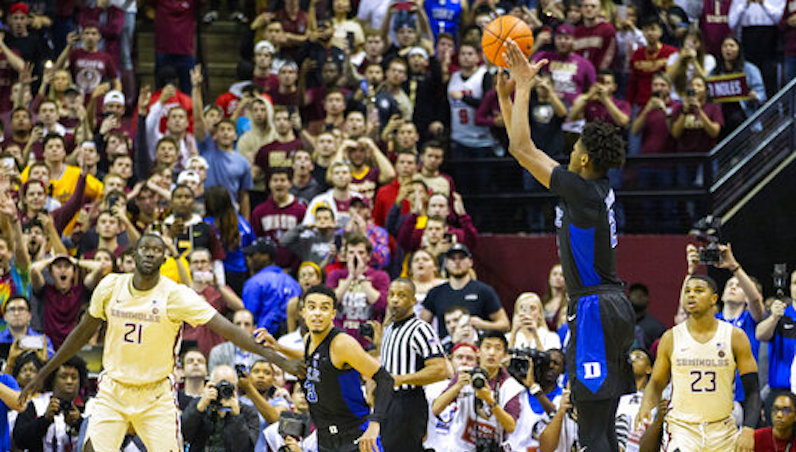 Chaos ensued after R.J. Barrett missed a free throw that would’ve tied Duke and Florida State at 78-78. A scramble for the loose rebound produced a lengthy series of replay and timeouts — chess moves between Mike Krzyzewski and Leonard Hamilton. At the conclusion of all of that, Duke possessed the ball — after it was ruled to have touched Mfiondu Kabengele last.

Duke broke its final huddle with Tre Jones set to inbound the ball and Marques Bolden stationed at the near block. Above those two, Cam Reddish, Jack White and Barrett lined up across the free throw line. To defend the play, Florida State put Christ Koumadje — the tallest player in program history at 7-foot-4 — on the ball. Koumadje stands over a foot taller than Jones.

For the most part, Duke keeps things pretty simple in its half-court offense these days; it’s mostly motion sets that run simple actions to get its star plays in isolation. It works, too. However, the Blue Devils can get creative with BLOB sets. These type of quick-hitters are perfect to exploit man-to-man defenses on baseline inbounds plays.

At the start, Bolden lifts to set an up-screen for Barrett, who was dynamic scoring the ball on Saturday in Tallahassee: 32 points on 19 field goal attempts. He draws gravity everywhere he goes offensively; Duke used this to its advantage — the perfect decoy.

Barrett’s defender, MJ Walker, went around the screen and followed Barrett to the corner; Bolden, after the screen, crashed to the basket. Jack White, after setting a flare screen on Terance Mann for Reddish, also slammed down to the hoop.

With Mann screened, and unable to facilitate a switch with Trent Forrest — who was subsequently screened by Bolden — FSU is in serious trouble. The communication isn’t there; making matters worse, Kabengele covers no one. This is a panic moment in a high-leverage situation — Reddish, Duke’s top catch-and-shoot option, is Wide Freaking Open.

Even after the design and execution from Duke, Reddish still has to drill the shot. Reddish is an excellent player, one of the top NBA prospects in the country. However, after a hot start to the season, it’s been rough for the future lottery pick. In the previous six games before the FSU win — Hartford through Wake Forest — Reddish shot just 25.4 percent from the field and 18.4 percent on 3-pointers (7-of-38 3PA).

In Tallahassee, though, Reddish looked sharp: 23 points on 15 attempts (5-of-8 3PA), three assists, one block and one steal. He even looked confident attacking off the catch and working left on the baseline — one of his best moves.

The slump — appears — busted, which could matter a great deal to Duke. The Blue Devils have scored just 0.8 points per possession (41.4 eFG%) on spot-up possessions, according to Synergy Sports. On catch-and-shoot attempts, specifically, Duke is 72-of-245 (29.4 FG%, 44.1 eFG%). Reddish is the best high-volume option on the roster to get that moving in a more positive direction.

Duke is terrifying defensively, which helps trigger its vaunted fast break attack. An offense that features Williamson, Barrett, Jones and Reddish is going to be good — no matter what. But as this team looks to reach its full potential, increased half-court efficiency is imperative. Next Saturday, Virginia (14.2 percent turnover rate) comes to Durham. Duke may not be able to get into a track meet with the Cavaliers. It would be a significant boon if Reddish could continues to hit from deep.

(Also: Lost in all of this will be Jones, who again made a difficult pass look easy. Reddish is open, no doubt, but to fit this pass around Koumadje, while having to remain stationary, is so impressive.)

One Number to Know: A look at how Zion Williamson can crack a defense with a pass