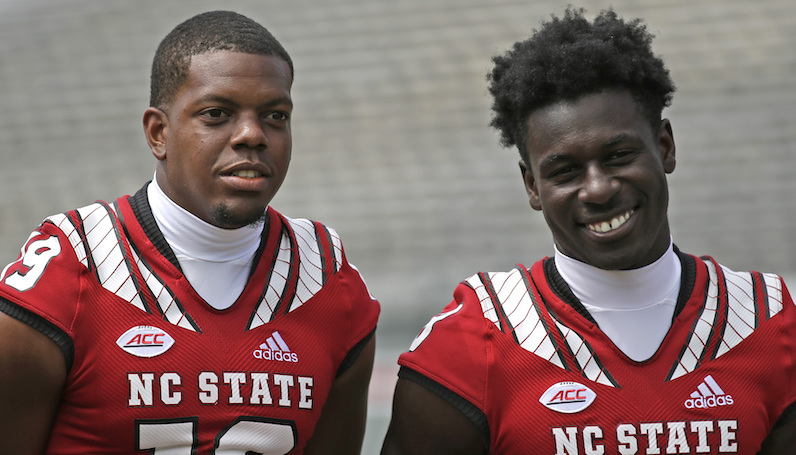 To be one of the programs in the College Football Chosen Few — Alabama, Clemson, Georgia, Ohio State — means to never rebuild; only reload. There’s no time for a down year; similar to the Marvel Cinematic Universe, the expectation exists for a reliably good product to be put out every 12 months.

When that’s the case, regardless of turnover, it’s hard to experience downturn at a position. Uncertainty can exist, sure; however, a new cast of blue-chip characters must be ready to run with the torch.

It’s not exactly the same case for programs that exist outside of the bubble. There will be more fluctuation. And in some seasons — after several key, NFL-level contributors leave — things can be rocky. However, when it comes to the receiver group at NC State, the Wolfpack appear to still be on solid footing.

Before we look ahead to what Emeka Emezie, Thayer Thomas and others bring to the table in 2019, let’s take a quick look at what NC State must replace, first.

Kelvin Harmon, one of the most prolific receivers in program history, is now in Washington; elsewhere, Jakobi Meyers, a target machine in the slot last season, is fighting for a roster spot with the New England Patriots. Together, those two combined for some monster numbers last season: 237 targets, 173 receptions (73 percent catch rate), 2,233 yards and 11 touchdowns.

Those two alone — Harmon and Meyer, who both averaged at least nine yards per target — accounted for nearly half of NC State’s targets last season (49.2 percent). Factor in Stephen Louis, a gifted playmaker who had to deal with injuries in 2018, and a lot of production went out of the door in Raleigh. (Louis is in training camp with the Houston Texans, too.)

As the page turns, here’s who NC State will look to in its passing game this fall.

Despite finishing third on NC State’s roster in targets last season, Emezie was still a heavily-featured receiver: 53 receptions (10th most in the ACC) on 80 targets — good for a catch rate of 66.3 percent. The 6-foot-3 Emezie finished with 616 receiving yards, 14th most in the ACC, which translated to 11.6 yards per catch and 7.7 yards per target.

With his height, Emezie is an alluring jump-ball and red zone target. He also has the strength and speed to make plays after the catch, when needed.

Emezie was one of 16 ACC players to finish the season with at least 23 receptions of 10+ yards; over 45 percent of his receptions (24) went for either first downs or touchdowns.

As the 2019 season approaches, Emezie looks like a star on the rise — assuming NC State gets productive play for the quarterback position, which is a bit of a mystery right now.

Not sure who NC State's quarterback will be next season but he has a best friend in Emeka Emezie. "It ain't easy" is in for some kind of junior season

One of the more unheralded players on NC State’s roster — an unranked prospect who went from walk-on to scholarship athlete — Thomas announced his name quickly in 2018. With NC State trailing in its opener, Thomas hauled in a catch-and-run for NC State’s first lead and touchdown reception of the season.

(Also: check out Emezie on this play, throwing a key block to help Thomas get to the edge.)

One week later, he went wild against Georgia State: nine receptions for 114 yards and another touchdown. In that performance, he became just the sixth NC State receiver — since 2000 — to record nine or more catches in a game for at least 100 yards and a touchdown, too.

Thomas would go on to finish his rookie season with 34 receptions on 47 targets — 72.3 percent catch rate — for 383 yards and three touchdowns. He was one of five players on NC State’s roster to finish with at least 25 receptions and average over 11 yards per catch.

It will likely take some time for Thomas to build chemistry with the new Wolfpack quarterback; there was an instant connection between he and Ryan Finley. The chances of that happening again may be slim. As NC State looks to integrate a new quarterback, though, the sure-handed Thomas could be a valuable release valve on shorter slot patterns.

With good height and above-average ball skills, Riley is another intriguing perimeter option for NC State. At times, with all of NC State’s offensive talent in 2018, it was tough for Riley to see a high volume of touches. However, the 6-foot-4 wideout still carved out a role in the Pack’s offense. Riley, targeted 48 times, recorded 28 receptions (58.3 percent catch rate) for 315 yards and and two touchdowns.

One of those touchdown receptions came on a gorgeous back-shoulder fade in the team’s bowl game against Texas A&M.

After sitting out the first three games of the 2018 season, Angeline, the USC transfer tight end, worked himself into NC State’s congested passing academy. He caught nine passes — on 14 targets, 64.3 percent catch rate — for 169 yards (18.8 yards per catch) and a touchdown.

The 6-foot-7 Angeline is a red zone presence and he gives the Pack something they haven’t had in a while: a tall, pass-catching tight end. You have to go back to David Grinnage in 2015 to find the last NC State tight end (not named Jaylen Samuels, who was more of a hybrid player) that caught more than 20 passes in a season. Assuming good health, it’s likely that Angeline will push past that arbitrary limit this season.

Welcome to the ACC, Tabari Hines. Back in January, the former Wake Forest and Oregon receiver committed to play his final season of college ball at NC State. Hines played three seasons of ball (2015-17) at Wake Forest and put up some decent numbers: 123 receptions for 1,496 yards and 13 touchdowns.

During the 2017 season in Winston-Salem — as Greg Dortch started to emerge as a star — Hines was still the most targeted player on Wake’s roster: 53 receptions on 79 targets. The year prior, as a sophomore, Hines was the most targeted receiver on the 2016 team, too: 38 catches of 58 targets. Over his three-year career at Wake Forest, Hines posted a catch rate of 65.4 percent.

It’s easy to see a role for Hines in this offense, playing the slot, working the underneath portions of the field while Emezie and Riley stretch things vertically. With Thomas and Hines, State has two proven commodities in the slot.