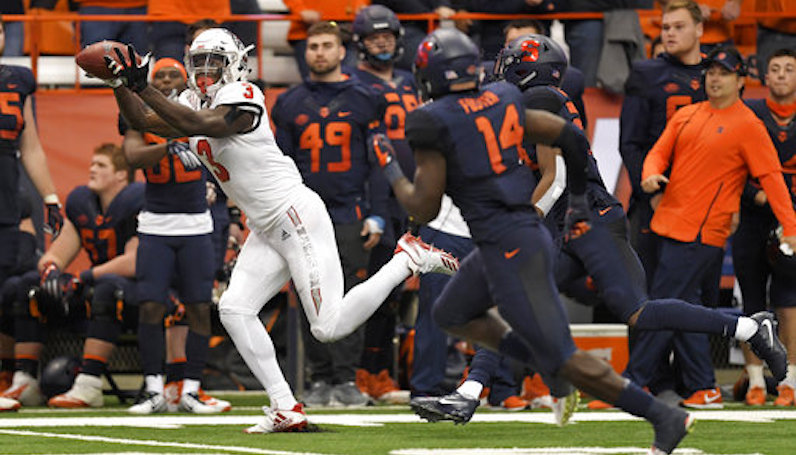 Steve Muma over at Backing The Pack was spot on a few days back when he wrote about what Kelvin Harmon did last Saturday at Syracuse. The upshot: NC State lost, which meant Harmon’s performance wouldn’t get the recognition it deserved.

Harmon was given a pat on the back and named ACC Receiver of the Week for his excellent. Outside of that, though, yeah, that effort hasn’t been acknowledged all that much. So, before the weekend, let’s provide a little more context exactly what Harmon did against the Orange.

In the loss at Syracuse, Harmon caught 11 passes — on 14 targets (78.6 percent catch rate), per Football Study Hall — for 247 yards — both of which are career highs. That translates to a ridiculous 17.6 yards per target. The 11 receptions are also tied for sixth most in a game in program history; Jaylen Samuels and Torry Holt each caught 15 balls in a game.

The 247 yards Harmon bagged — second most in the FBS this season — are also good for the second most in program history, usurping Holt’s 225-yard performance against Clemson in his dream 1998 season. In that same season, Holt set the program’s all-time single-game receiving record: 255 yards at Baylor. Basically, Harmon was darn close to shattering a record that has stood for 20 years now.

Going back to the 2000 season, this is just the fifth time that an ACC receiver has caught 10+ passes for 200+ yards and at least two touchdown in one game. The other four players to hit those benchmarks in a single game includes two first round NFL Draft picks: Torrey Smith, Sammy Watkins, Donald Bowens and Amba Etta-Tawo.

Harmon now has 142 career receptions, which is good for fifth in program history; it won’t be long before he eclipses the 147 reception of Eddie Goines (199-94) and moves into fourth all time. Getting any higher than that — Holt is third with 191 — is unlikely, unless Harmon elects to return for his senior season in 2019.