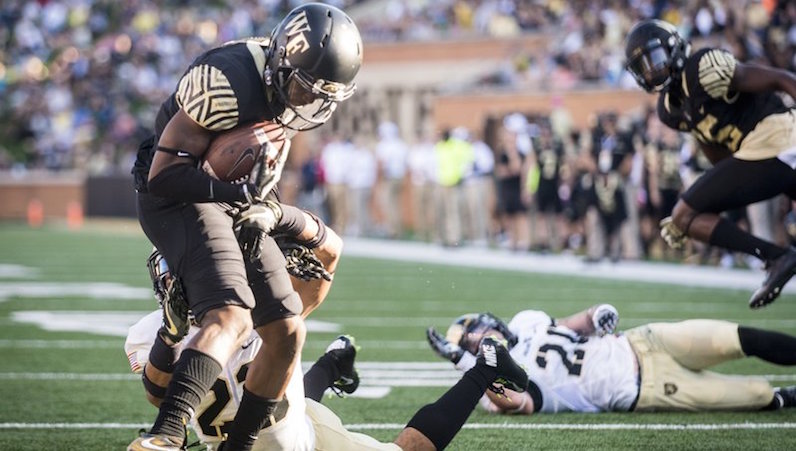 John Wolford and Kendall Hinton have split time at Wake Forest’s quarterback position for what seems like an eternity. Hinton is slated to once again be the starter, per Dave Clawson. Regardless of who takes the majority of those snaps in 2017, though, expect Tabari Hines to be heavily involved in Wake’s offense.

The Demon Deacons will attempt to go to consecutive bowl games this season for the first time since 2008.

If that’s to happen, Wake Forest’s passing attack needs to improve. Tabari Hines figures to be a big part of that picture.

The slot position is where Hines thrives from. He’s dangerous on quick bubble screens to the outside, which can be used to setup slants to the inside.

Hines can also get vertical on wheel routes and deep posts. If a defense zones Wake Forest, he’s adept at finding a hole in the middle of that maze for completions, too.

Ryan Switzer of North Carolina was the kingpin of the slot within the ACC last season. But perhaps that’s a role Hines could ascend to this season.

Tight end Cam Serigne — a preseason first team All-ACC selection — gets the most publicity as the main hub in Wake’s passing game. That’s justifiable, too; Serigne is a great player.

As he took on a role that involved more blocking responsibilities in 2016, though, Hines emerged as Wake’s top receiver.

According to Football Study Hall, Hines led Wake Forest in targets (58), receptions (38) and yards 447. Wake Forest quarterbacks targeted Hines on 17.4 percent of their attempts, and he hauled in an impressive 65.5 percent of those passes.

It’s no secret that Wake Forest has struggled through the air in recent years. In 2016, the Demon Deacons ranked No. 119 nationally in Success Rate on passing plays, per Football Study Hall.

When Wake needs to move the chains through the air, though, Hines is a prime target: 21 of his 38 receptions (55.3 percent) went for first downs, per cfbstats.com. This means that 36.2 percent of his targets led to a new set of downs, too.

Hines collected nine receptions on third down in 2016; all but one of those catches resulted in a first down.

Wake Forest returns a great deal of experience at the tight end and wide receiver positions — it’s not just Hines and Seigne. If this team can get consistent quarterback play, then a Hines-led receiving corp could produce numbers for Clawson.