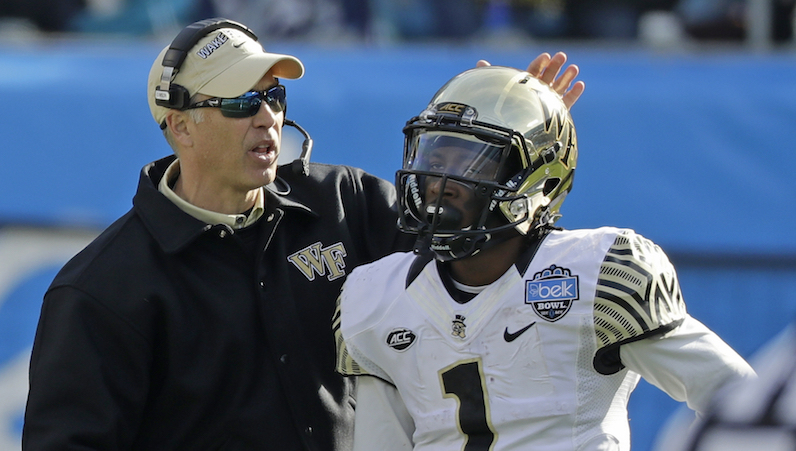 Busy, busy weekend — lots of stuff going on. Let’s get you caught up.

Florida State gets hot from deep, wins at Miami, 78-66

#FSU proves it can win on the road after all, beating Miami 78-66. After all last week’s concern, the #Noles are a home win over Georgia Tech next weekend from back to .500 in the ACC.

FSU is off until Saturday, when it hosts Georgia Tech; Miami, now a game under .500, must face Virginia Tech on Wednesday.

There’s only one game in the ACC tonight, but it’s a fun one: Duke at Notre Dame. The Irish and Blue Devils will tip at 7 p.m. In upset fashion, can Notre Dame hit the brakes on a four-game losing slide against Duke?

On Sunday in Chapel Hill, North Carolina pulled off a stunning upset — knocking off No. 1 Notre Dame, 78-73. Paris Kea led the way with one heck of a performance, too: 30 points and 10 rebounds. For UNC, the win was the program’s first against a No. 1 team in nearly 13 years.

On Sunday, former Wake Forest and Oregon wide receiver Tabari Hines committed to NC State. Hines played three seasons of ball (2015-17) at Wake Forest: 123 receptions for 1,496 yards and 13 touchdowns. His one season at Oregon was cut short due to an injury, but Hines played in four games and caught three passes, including one for a touchdown.

With Jakobi Meyers departing for the NFL, the 5-foot-9 Hines adds a veteran to the mix at slot for NC State in 2019.

Pittsburgh’s offensive line for the 2019 season grew by one on Sunday. Former Michigan lineman Nolan Ulizo will transfer to the program. Ulizo spent the last few seasons at Michigan; he played in five games during the 2018 season, and was a starter for portions of 2017, too.

Pitt ranked third in the ACC in raw rushing yards per game during the 2018 season.