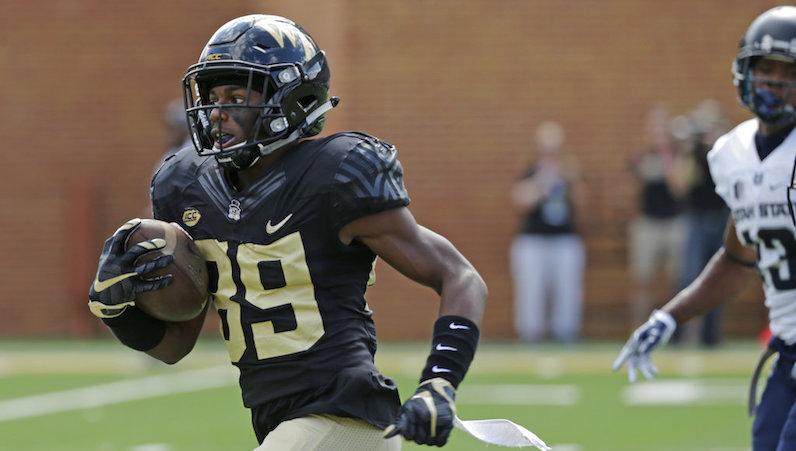 Wake Forest's Greg Dortch (89) runs for a touchdown after a catch against Utah State in the first half of an NCAA college football game in Winston-Salem, N.C., Saturday, Sept. 16, 2017. (AP Photo/Chuck Burton)

The college football season has yet to reach October; however, it’s already time that we start mentioning Greg Dortch of Wake Forest as one of the ACC’s best all-purpose talents.

Senior John Wolford — behind a revitalized offensive line — has been an efficient, dual-threat option at quarterback. His favorite target is Dortch, who can impact games in more than one way. I don’t mean to offend Don La Greca (or maybe I do), but let’s check out the stats.

Greg Dortch is Wake Forest’s most targeted receiver; nearly 29 percent of the team’s pass attempts have gone in his direction. Through the first three games of his career, the redshirt freshman has racked up 14 receptions on 21 targets, per Football Study Hall — a catch rate of 66.7 percent.

Dotch, a run-after-the-catch menace who has scored a touchdown in every game so far this season, is averaging 12.8 yards per catch and 8.5 yards per target. Junior Tabari Hines has been solid, too: 11 receptions on 13 targets, according to Football Study Hall.

On the season, Dortch’s 14 receptions have gone for 179 yards — 12.8 per catch — and four touchdowns. According to Sports Reference, Dortch is one of just 16 FBS players with at least 10 receptions, four touchdown catches and a yards per catch average of 12 or better.

Virginia Tech’s Cam Phillips is the only other ACC player to hit these benchmarks.

The 5-foot-9 Dortch has three receptions of 15-plus yards and two catches of 25-plus yards, per cfbstats.com.

The other stuff, too

Wake Forest and Dave Clawson have made sure to involve Greg Dortch in as many ways as possible. Dortch has two carries (eight yards), eight punt returns (71 yards) and five kick returns (106 yards), too.

He’s one of only five ACC players in 2017 to record at least two receptions, two carries, two punt returns and two kick returns. Dortch is joined on that list by Nyheim Hines, Shaun Wilson and Quadree Henderson — three of the league’s most explosive, veteran playmakers.

Dortch could very easily claim more yardage and scoring to his tab, too, if not for an unfortunate penalty. In the win over Presbyterian, Dortch had a 95-yard kick return touchdown called back.

Regardless, within the ACC, Dortch is also one of only two freshman to rank inside the top 15 in terms of all-purpose yards (121.3).