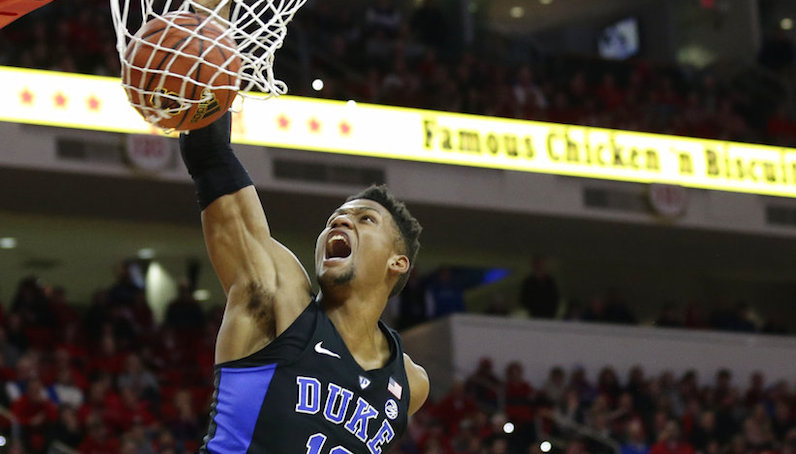 In this week’s ACC teleconference, Duke coach Mike Krzyzewski revealed that sophomore center Marques Bolden (MCL) will miss Wednesday’s game against Pittsburgh. Bolden may not be the only Blue Devil held out, though; sophomore forward Javin DeLaurier (hamstring) may miss the Pitt contest, too.

Bolden didn’t play Saturday night when then-No. 2 Duke fell at NC State. According to Krzyzewski, Jack White fell into the leg during practice, which caused the injury. Coach K mentioned that Bolden could miss Saturday’s game against Wake Forest as well.

In the final game before Winter break, Javin DeLaurier sat out against Evansville — also with a hamstring injury. DeLaurier is doubtful this week.

Neither of the two sophomores leads Duke’s offense; that honor belongs to Marvin Bagley and Grayson Allen. DeLaurier and Bolden, combined, have played 349 minutes, and scored 116 points on 47-of-84 (55.9 percent) shooting. Both players have (low) usage rates hovering around 15 percent, per Sports Reference.

The Blue Devils have used the same starting lineup for all 15 games this season. Trevon Duval, Grayson Allen, Gary Trent, Marvin Bagley and Wendell Carter. Four of those guys — Allen, Trent, Duval and Bagley — play at least 30 minutes per game, too. Trent is the only one of that to have a usage rate under 20 percent.

However, within the confines of Duke’s tight rotation, DeLaurier and Bolden carry value. According to KenPom, Duke’s bench has accounted for just 25 percent of the team’s minutes — No. 323 in the nation.

Jordan Goldwire and Alex O’Connell are the only other bench players to have played over 100 minutes so far this season.

While DeLaurier and Bolden are limited in terms of offensive impact, both still help around the basket. DeLaurier is shooting above 68 percent on two-point field goals this season, and has an offensive rebounding rate of 15.7 percent. If he qualified in terms of minutes played, that would be a top-15 rate, per KenPom.

The 6-foot-11 Bolden gives this team added depth in the post, which is key. Bagley has done well avoiding fouls — just 2.4 per 40 minutes — but Carter can’t quite say the same. Carter has picked up four or more fouls in nearly half the games (seven) that he’s played in this season.

Can’t stop what you can’t get to: Duke basketball continues to dominate above the rim