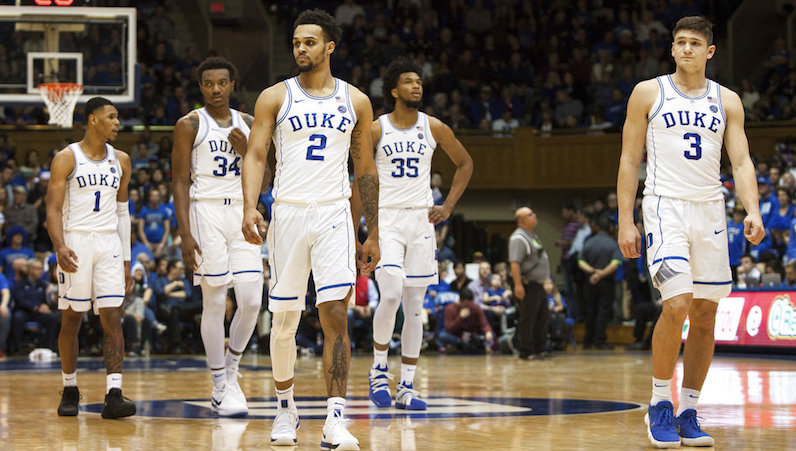 Duke basketball doesn’t return to the floor for an extended period of time. The Blue Devils have over a week off before the team’s second ACC game — Dec. 30 against Florida State. This will give Duke’s young roster plenty of time to rest up for what’s about to be a marathon of hyper-competitive basketball.

However, in an ideal world, the Blue Devils would probably prefer to just keep on running. That’s because Duke basketball is playing as fast as it ever as under Mike Krzyzewski.

According to KenPom, the average possession length for Duke on offense this season is 15 seconds, which ranks No. 16 in the nation. KenPom has tracked this statistic since the 2009-10 season — the year of Coach K’s fourth national title team. Over this stretch of time — nine seasons — Duke has never been quicker on offense.

It has to be mentioned that this is the third season of the reduced 30-second shot clock — a much-needed implementation in college basketball. Naturally, this forces teams to play faster, whether they want to or not. (Sup, Virginia?)

This has yet to cost Duke any of its efficiency. The Blue Devils rank No. 1 nationally in adjusted offensive efficiency, per KenPom. Oh, by the way, Duke is on pace to rank inside the top 10 of this metric for the 10th straight season.

Let’s go one step further, though.

In Duke’s 64-point blowout victory over Evansville, the Devils pressed full-court at times, and it wrecked havoc. Duke collected 13 steals, and forced the Aces into a gaudy 26.5 percent turnover rate, per Sports Reference. Grayson Allen, Trevon Duval and Gary Trent turned this activity into instant offense — a key trend for Duke in 2017-18.

Duke recorded 15 of the game’s 16 transition possessions against Evansville, per Synergy Sports; Duval and Allen combined for seven of those possessions, too.

According to Synergy, 21 percent of Duke’s possessions this season have come in transition — tied for fifth highest rate in the ACC. This is a slight departure from previous iterations of Duke basketball, and that’s only part of the story.

That’s because the Blue Devils have been absolutely magnificent on the go this season, so far. Duke has shot 65.1 percent and scored 1.28 point per possession (No. 14 in Division I) in transition this season.

A Race Between Past and Present

As you can see in the table below, the last five Duke basketball teams have all been rather efficient in transition. This shouldn’t come as much of a surprise; Duke usually has a roster filled with future pros; give them high-percentage looks, and well, they will score a lot.

This is also a benefit of having a jet-quick, pass-first point guard, like Trevon Duval, and rebound-munching and shot-blocking bigs — Marvin Bagley and Wendell Carter. That’s something Duke couldn’t have said a season ago. Frank Jackson was a stud, but he was a two-guard moonlighting at the point. Jayson Tatum is already an excellent defensive rebounder in the NBA, and Amile Jefferson was solid, too, but that’s not quite the same as Bagley and Carter.

Duke ranks inside the top 11 nationally in terms of both steal (6.2 percent) and block rate (5.1 percent), per KenPom. These types of defensive outcomes can lead to offense in the open floor.

Duval is fast off the bounce, and knows to look ahead for shooters and cutters; this is way the freshman guard has an assist rate north of 30 percent. The former 5-star recruit is also shooting 57.6 percent as a ball handler in transition, per Synergy.

Shaq of the MAC’s son can run

Gary Trent Jr. has been special in transition, too. According to Synergy, Trent has scored 1.97 points per possession in transition, which ranks No. 1 in the nation (minimum 20 possessions). He’s shot 75 percent on these attempts (96.4 eFG%).

This is where Trent can hunt for catch-and-shoot three-pointers. Trent is a combined 16-of-22 on transition attempts from the wings, right or left. He has scored 46 points on 24 transition possessions from the wing (1.92 per).

It’s imperative for Duke’s long-term success this season that Trent become a reliable range shooter. Over his last three games, he’s 13-of-22 (59.1 percent) from deep.