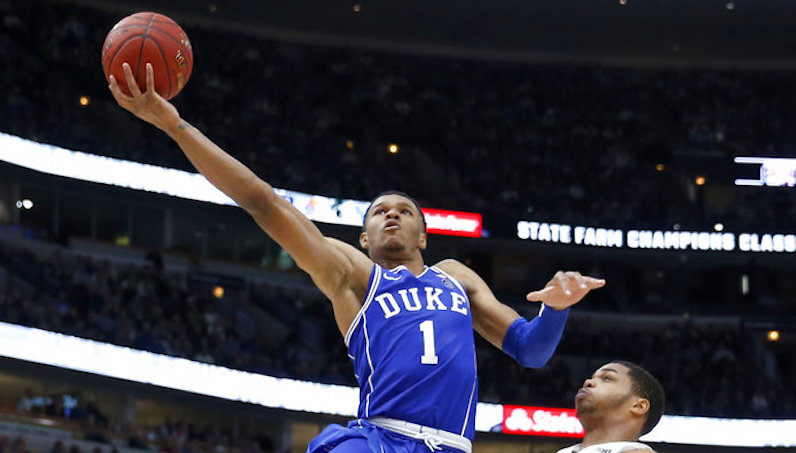 It looks like Dennis Smith Jr. has passed the torch to Trevon Duval.

Grayson Allen stole the show against Michigan State, but Duke’s freshmen have all had moments, too. Wendell Carter protects the paint; Gary Trent Jr. hunts catch-and-shoots off pindown screens; Marvin Bagley dominates at the rim.

And while his jump shot has yet to find a home, point guard Trevon Duval is running the show with cutthroat efficiency.

Trevon Duval is currently 0-of-7 on three-pointers; the freshman is also just 4-of-8 from the free throw line. Through the first three games, he has a true shooting rate of only 49 percent; however, he currently stands second on the team in terms of offensive rating, per KenPom: 129 points per 100 possessions.

This is because Duval is shooting efficiently closer to the basket, and carving up opponents with his distribution. Right now, Duval is the only player in the nation with at least 30 assists and fewer than five turnovers. Duval has assisted on 48 percent of his teammates’ made field goals while on the floor.

According to Sports Reference, Duval is one of only 12 Division I players with an assist rate north of 40 percent and a turnover rate under 10 percent.

Starts on a roll

NBA scouts have to love what they have seen thus far from Trevon Duval in the pick-and-roll game. Duke lost an excellent pick-and-roll scorer in Frank Jackson — now with the New Orleans Pelicans. But Duval is here to pick up that slack.

That’s a ludicrous number, and it will drop once more possessions occur and we exit the small sample size theatre. But it’s still really impressive, and forecasts good things for Duke’s offense.

When things got tight late in the second half against No. 2 Michigan State, Duval made several outstanding finishes at the rim that helped pull that game out. Duval connected on three layups in a four-minute stretch when the game was within two possessions, including one on a left-to-right crossover that left Nick Ward grasping for air.

My word, that crossover from Duval on Ward. That's an NBA move.

According to Hoop Math, 57 percent of Duval’s field goal attempts have come at the rim. On non-post-up possessions around the basket, Duval is shooting 70 percent so far this season, per Synergy.

Duke will be even scarier on offense when Duval’s shooting catches up with his playmaking. And it’s not a stretch to say that he and Grayson Allen are the most talented backcourt in America.

37 Special: Grayson Allen saves No. 1 Duke in win over No. 2 Michigan State