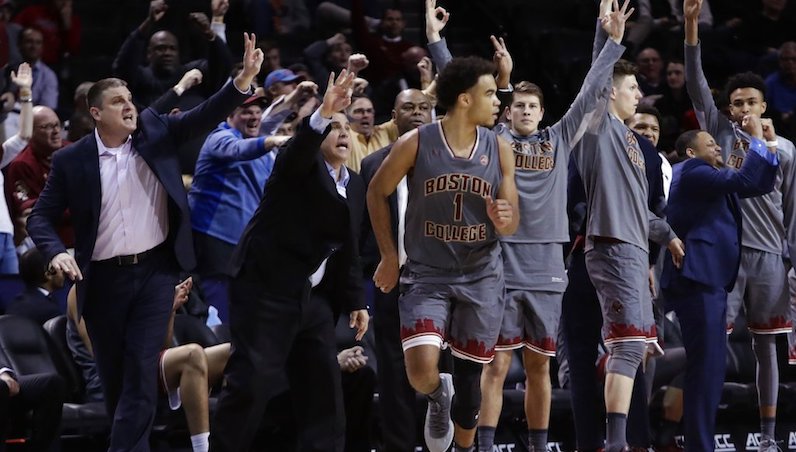 Boston College's Jerome Robinson (1) watches North Carolina State as his teammates celebrate a three point basket by Robinson during the second half of an NCAA college basketball game in the second round of the Atlantic Coast Conference tournament Wednesday, March 7, 2018, in New York. Boston College won 91-87. (AP Photo/Frank Franklin II)

The result of Wednesday’s second round ACC Tournament matchup between Boston College and NC State may get boiled down to a few late possessions. Late turnovers from Sam Hunt and Al Freeman occurred in leverage moments; the technical foul on Markell Johnson was significant, too.

However, the Eagles took a 14-point lead, 45-31, into halftime. Ky Bowman and Jerome Robinson, of course, led the way with 21 points in the first 20 minutes of action. It wasn’t just those two stud guards, though; this was a full team effort as BC dominated at the rim.

According to Synergy Sports, Boston College went 11-of-15 (73.3 FG%) on field goal attempts around the basket in the first half. Jerome Robinson went 3-of-4 on attempts at the hoop; big men Nik Popvoic and Johncarlos Reyes went a combined 6-of-8. In total, the Eagles went 14-of-24 (58.3 FG%) on two-point field goal attempts before halftime.

This is a trend that plagued NC State all season, too. The Wolfpack allowed opponents to shoot 60.2 percent and score 1.23 points per possession (No. 315 in the nation) on half-court attempts around hoop.

The Pack tightened up some in the second half, though: Another reminder of the importance of Torin Dorn. After picking up his second foul less than four minutes into the game, Dorn rode the pine until after halftime. In the second half, NC State outscored BC 56-46.

Dorn, a switchy defender, took the Jerome Robinson assignment. In 19 second half minutes, Dorn held Robinson to just two field goal attempts at the rim, per Synergy. Ky Bowman, however, took over — going 4-of-6 around the basket.

Up next for Jerome Robinson and Boston College: a third round meeting with No. 19 Clemson. The Tigers ranks 7th nationally in defensive efficiency, per KenPom. BC fell to Clemson back in January, 74-70; this game took place before Donte Grantham was lost for the season, though.

In that game, Robinson and Bowman combined for 47 points.