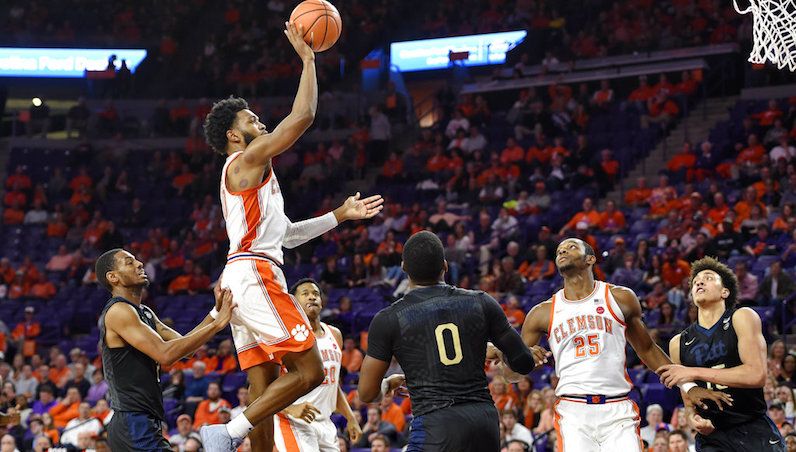 Clemson's Gabe DeVoe shoots a jumper while defended by Pittsburgh's Jonathan Milligan and Jared Wilson-Frame (0) during the second half of an NCAA college basketball game Thursday, Feb. 8, 2018, in Clemson, S.C. (AP Photo/Richard Shiro)

In his first season as a full-time starter, Gabe DeVoe has put together a splendid shooting performance. Clemson ranks No. 32 in the nation in adjusted offensive efficiency — 115.3 points per 100 possessions, the best of Brad Brownell’s tenure.

A big part of that success has been the emergence of Devoe. In his first three seasons at Clemson, DeVoe appeared in 83 games, and had a career effective shooting rate of 44.3 percent — which is, eh, not great. This season — as nearly 58 percent of his field goal attempts have come from beyond the arc — that number has climbed to 60.7 percent.

DeVoe has the ability to pass or create for others (a low 10 percent assist rate), and get to the line (22.3 percent free throw rate); however, his strength is spacing the floor, and letting it fly from deep.

According to Synergy Sports, DeVoe has scored 1.25 points per possessions on spot-ups this season, which ranks sixth in the ACC. DeVoe’s spot-up effective field goal rate (65 percent, fourth in the ACC) is up from 50 percent in 2016-17, too.

Gabe DeVoe has rise his level of play all season; in the last five games, though, that’s gone up another level. With Donte Grantham out due to a wildly unfortunate ACL injury, DeVoe has averaged 20.4 points and 4.4 rebounds over the last five games. In that stretch, DeVoe has gone 22-of-36 (61.1 percent) on three-pointers — and 57.8 percent from the field.

This is efficiency: Over Clemson’s last five games, including Thursday’s win against Pitt, DeVoe has scored 102 points on 64 field goals.

DeVoe has four career games of 20-plus points; three of those performances have come in the last two weeks.

Who will backup Kelly Bryant at Clemson?