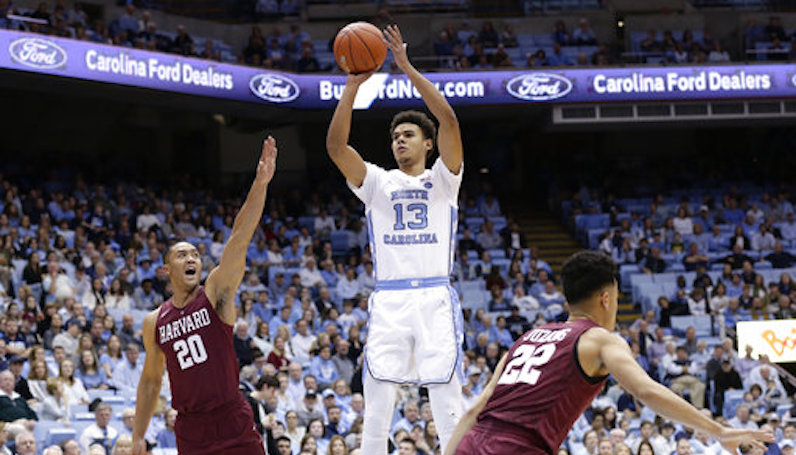 In recent victories over Davidson and Harvard, the name of the game for UNC basketball was defense. Against two fringy top-100 KenPom teams that love to let it fly from deep — both Davidson and Harvard boast three-point attempt rates of at least 43 percent — North Carolina locked up defensively.

UNC allowed 57 points on 78 Harvard possessions, a defensive efficiency of 73.1. That's its 2nd-best mark of the year behind only Tennessee Tech (69.0). Last game vs. Davidson (77.9) was the Heels' 3rd-best DRtg, so the trend has been promising (albeit against mid-majors).

However, let’s take a stroll to the other side of the floor, and check out a few ways North Carolina has looked to unlock three of its volume range shooters: Cameron Johnson (sizzling since the season started), Luke Maye and Kenny Williams.

So far this season, UNC hasn’t exactly set the nets on fire from deep — with the exception of Johnson (48.5 3P%), obviously. According to KenPom, North Carolina ranks No. 301 nationally in three-point attempt rate: 33.1 percent — down slightly from 35.1 percent last season. Less than 28 percent percent of North Carolina’s total points have come from beyond the arc, too.

Now, it may seem a little silly to highlight three-point offense from a two-game sample when UNC went a combined 14-of-44 (31.8 3P%) from deep, but we’re going for it. (Let me have this one, thanks.)

This dude can’t miss, plain and simple. Cameron Johnson is letting it fly from deep with profound confidence — 7.5 three-point attempts per 40 minutes (48.5 3P%). Currently, he ranks inside the top five of the ACC in both three-point percentage and effective shooting rate.

During the first half against Harvard, UNC held a measly one-point lead going into the under-8 official timeout. After the break, though, the Tar Heels wasted no time looking for early offense. Garrison Brooks rans the lane, Leaky Black and Brandon Robinson space to the corners; the middle of the floor is wide open for Coby White and Johnson.

This is one way the Heels can really do damage with Johnson as the 4 and its four-out looks. Look at all of that space for White and Johnson to operate. Johnson sets a quick ball screen for White; Harvard must respect his relentless speed and ability to turn the corner and attack.

One Harvard defender wants to switch — which is what opponents should do on this if they have the personnel — while the other plans for help-and-recovery. In that small lapse of communication — and that’s all it takes, too — Johnson spaces out for an easy pitch-and-catch with White. Splash.

Johnson’s shooting prowess can make things easier for everyone on offense, too. This comes from later in the first half, when UNC went super small to close things out. Johnson sets a pindown for Nassir Little, who doesn’t hesitate. The future first round pick curls hard and attacks downhill — getting all of the way to the hoop for a layup.

Again, both defenders have to respect Johnson as an efficient scorer — one who needs little time to put up points ‚— which adds to his potency as a screener. If defenders have to stick close to the player setting the screen, so much other stuff can open up as a result. In this instance, Little takes advantage.

This kind of attack is something I’ve wanted to see all season from Little, too. He doesn’t wait and drives powerfully at the rim. This duo — Johnson and Little — has flashed some nice chemistry together, working off the ball and into two-man actions. From this small-ball five, especially, this is something to keep an eye on.

As a junior, Luke Maye evolved into one of the top inside-out scoring threats in college hoops. Maye has returned as an efficient offensive player — one that avoids turnovers (12.8 percent turnover rate) and gets to the foul line.

Can’t be sure which direction the causation is working, but there is definitely a trend that passes the eye test

His three-pointer, however, hasn’t quite jumped online, yet. Maye’s volume from deep has increased (31.2 percent three-point attempt rate), which is nice, but he sits at 34.1 percent from beyond the arc — down from 43.1 percent last season. (In 2017-18 ACC play, Maye hit over 46 percent of his triples, best in the league.)

Even if Maye can’t return to that 40 percent benchmark, opponents still have to respect his range, and guard those shots. That matters, too. Maye provides value as a key frontcourt spacing agent, which helps keep the lane clean for frantic drives from Coby White and Nassir Little.

From the Davidson game last week: This play came quickly after a foul/turnover from Wildcats power forward Luka Brajkovic. White dribble from up high with Garrison Brooks and Maye staggered at the two elbows. Kenny Williams runs off the Iverson screens from the two bigs and gets the pass from White; meanwhile, Johnson sneaks up to replace a moving Maye in the formation.

With the defense focused on Williams, and White cutting down to the corner, Maye spaces out to the weak side and comes off a double flare screen from Brooks and Johnson. The result: a juicy catch-and-shoot three-ball for Maye off a nice diagonal pass from Williams.

Kenny Williams: Still there but with some struggles

The season-long power outage from deep for Kenny Williams is a bit of a head-scratcher. Last season, Williams emerged as a legit long threat — one of the top catch-and-shoot players in the ACC. Williams let a handful of three-pointers fly per game (55.8 percent of his field goal attempts) last season — drilling over 40 percent of them.

He scored 1.19 points per possession (63.6 eFG%) coming off screens in the half court, per Synergy, and scored 1.15 points per possession (58.2 eFG%) on spot-ups. In terms of spot-up efficiency, that ranked fifth amongst returning ACC players. Williams has actually been pretty good in the half court (54.5 eFG% on catch-and-shoots, per Synergy), but in transition (40.5 eFG%) he’s landed in some pitfalls.

Once again, the volume is there (56.3 percent of his field goal attempts); however, he’s shooting under 26 percent from deep. Overall from the floor, his effective shooting clip has dropped from 60 percent a season ago (an excellent number) to under 46 percent this season.

Williams has still been a productive, lower-usage player on offense, though; he doesn’t turn the ball over much, although that number has jumped this season, too (3.2 turnovers per 100 possessions), and he’s getting to the foul line more frequently. As a senior, Williams has greatly expanded his role as a passer — 23.2 percent assist rate, easily a career-best mark.

If he’s able to locate that transition jumper of his, look out.

Williams: Slice it up

Sticking with Williams, though, let’s look at how UNC opened Williams up in the team’s final tune-up before league play. (This was a play that the always-excellent Dadgum Box Scores highlighted on Twitter, too.)

Kenny Williams knocks down a 3

After going just 2-of-8 from deep against Davidson, Williams had a nice offensive performance in the Harvard win. Williams scored 12 points on six field goal attempts, and stuck one of his three three-point attempts. That hit came late in the second half — from one of UNC’s slice-cut looks.

As Coby White holds the ball on the wing, Williams runs up and sets a back screen for Johnson, who runs to the block; this then becomes screen-the-screener action, as Williams quickly snaps around a pindown from Maye (screener gravity).

Heels land at No. 4 in this week’s Power Rankings