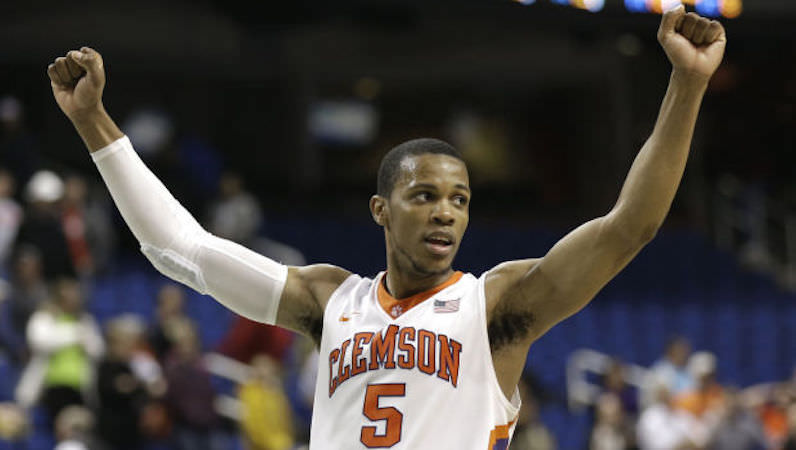 Jaron Blossomgame is having a great season, but the senior has slumped from beyond the arc. (AP Photo).

So far, 2017 has been a rather unkind year to the Clemson Tigers. Speaking of basketball only, of course.

Clemson ended 2016 on a nine-game winning streak, including four victories over teams in Ken Pomeroy’s top 80: Alabama, South Carolina, UNC Wilmington and Wake Forest. However, since the calendar flipped, the Tigers have struggled, dropping four games in a row to North Carolina, Notre Dame, Georgia Tech and Virginia.

All four of Clemson’s ACC losses have been decided by eight or fewer points.

The Tigers still rank inside the top 55 in terms of both offensive and defensive efficiency, according to KenPom.com. However, it’s concerning that the team’s best player — Jaron Blossomgame — can’t buy a bucket from outside the arc.

After shooting 44.1 percent on three-pointers last season, Blossomgame has regressed: 14.9 percent (7-of-47).

On catch-and-shoot attempts last season, Blossomgame rained fire and scored 1.414 points per possession, according to Synergy, which ranked in the 97th percentile nationally. It was also the third-best number in the ACC — above well-known bombers like V.J. Beachem and Adam Smith.

This season, that’s dropped to a minuscule 0.324 points per possession — a full point less than last season — on 10.8 percent shooting. That efficiency number ranks 95th out of 97 qualified ACC players (10 or more possessions). Blossomgame has made just one of 10 three-pointers in four league games.

That kind of decline is inexplicable, especially for such a great player. It’s one thing to regress; it’s another to totally fall off a cliff.

That said, Blossomgame is still having an all-around great senior season. He’s shooting 61.2 percent from inside the arc and continues to get to the free-throw line with regularity (10 attempts per 100 possessions). According to Synergy: Blossomgame has excelled on post-ups (1.07 points per possession) and off of cuts — 1.5 points per possession (fifth in the ACC), 73.7 percent shooting.

He leads the ACC in two-point field goals, and within the conference, Blossomgame still ranks inside the top 15 of catch-all metrics, like player efficiency rating and win shares. It helps that Blossomgame is a high-usage player (25.6 percent usage rate) who doesn’t turn the ball over much — posting a turnover rate of just 10.8 percent.

Clemson’s star is still getting the job done, and his teammates have picked up the slack from distance, but this group won’t hit its ceiling until Blossomgame heats up from deep.

The Tigers haven’t gone to the NCAA tournament since 2011 — Brad Brownell’s first season with the program. Clemson entered 2016-17 with a deep roster — headlined by the returning Blossomgame — that was supposed to contend for a berth in the Big Dance. However, at 11-6 (1-4 ACC), it’s clear that despite having a lot of useful pieces, Clemson has a great deal of work on the horizon.