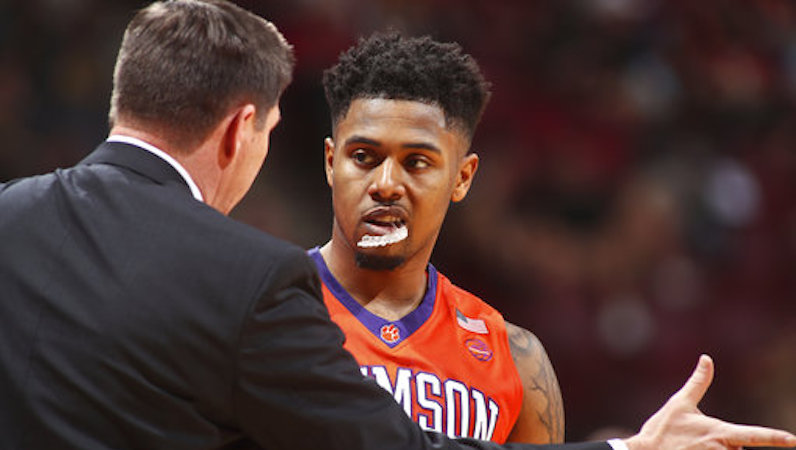 Clemson athletic director Dan Radakovich made a big decision earlier this month when he decided to bring back Brad Brownell for an eighth season. The 2016-17 season was a disappointing run for Clemson, which entered the year with NCAA Tournament aspirations.

The loss of Jaron Blossomgame will be a hit to Clemson basketball, but there are real reasons for some hope to be inspired in Tiger Town next season.

The Luck Factor: You win some, you lose some

Clemson’s struggles in close games were well-documented in 2016-17. The Tigers lost 12 ACC regular-season games. Nine of those two defeats were by six or fewer points — essentially, two-possession games. The Tigers lost to Duke by only seven points in the league tournament, and the season ended at home after Clemson blew a 20-point lead in its NIT opener versus Oakland.

Some of this was certainly self-inflicted. In a two-point loss at Duke in February, Clemson’s late-game management was shaky at best. But it is unlikely that this team will suffer the same amount of bad luck in close games, especially with some adjustments in terms of offensive execution.

There goes the neighborhood

The ACC sent a record nine teams to the NCAA Tournament. When the 2017 NBA Draft rolls around, you can bet a significant percentage of the first round will be composed of ACC players.

This season has yet to end, so it seems a little silly to project roster construction this far down the road, but it is a safe assumption that the league will not be nearly as talented in 2017-18.

Duke will reload but lose a lot. North Carolina will say goodbye to an awesome senior class, and possibly Justin Jackson — a projected lottery pick. Regardless of what happens with Donovan Mitchell, Louisville will be really good; however, the Cardinals are far less scary if their best player departs for higher-paying waters. Notre Dame brings back Matt Farrell and Bonzie Colson — the league’s best pick-and-roll combo — but Steve Vasturia and V.J. Beachem will no longer be in South Bend. Florida State’s two best players are also entering the draft.

Basically, there will be a lot of turnover in the ACC, and Clemson could capitalize. Avry Holmes evolved into a fantastic perimeter option in his senior season, and Blossomgame was one of the best players in program history. However, the Tigers will still have offensive firepower, especially at the guard spots. Speaking of…

The Tigers added two gifted guards to the rotation last season after both sat out the 2015-16 season. Both of those guys can really score.

Shelton Mitchell ranked second on Clemson in scoring — 10.8 points per game. According to Sports-Reference, led the Tigers in assist rate; Mitchell assisted on 25 percent of his teammates’ made field goals while on the floor. On spot-up opportunities, according to Synergy Sports, Mitchell scored 1.15 points per possession.

Marcquise Reed, a transfer from Robert Morris, was one of the best bench scorers in the ACC in 2016-17. Reed averaged a hair under 10 points per game and shot nearly 40 percent on three-pointers, as well as 91 percent from the foul line. He is a dynamic threat, especially in the pick-and-roll, and is poised for a breakout season as a redshirt junior in 2017-18.

A full season of Elijah Thomas

Clemson did not add Texas A&M transfer Elijah Thomas to the lineup until mid-December, but over the final 24 games, the big man flashed some serious game.

Thomas looks like a player Clemson has not had in some time: a low-post scoring hub. The lefty scored 17.7 points per 40 minutes and shot 58 percent from the field. Thomas, though, is a disastrous free-throw shooter.

Of ACC players to record at least 30 post-ups this season, Thomas ranks fifth with a shooting clip of 52.2 percent, according to Synergy.