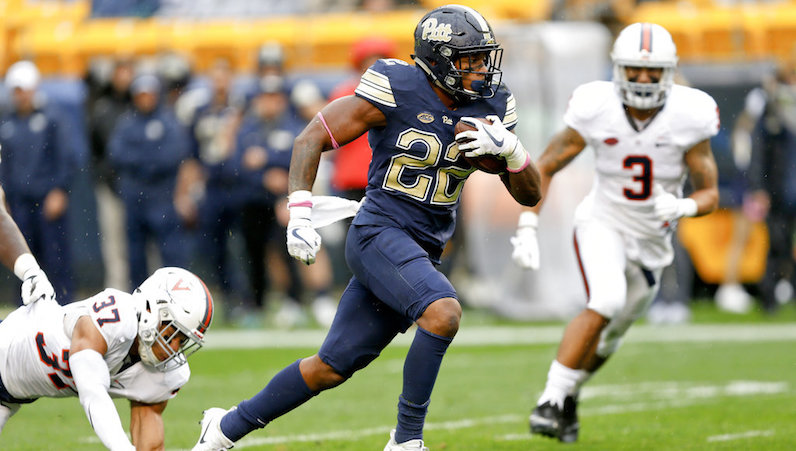 Pittsburgh running back Darrin Hall (22) runs through the Virginia defense for a touchdown during the first half of an NCAA college football game, Saturday, Oct. 28, 2017, in Pittsburgh. (AP Photo/Keith Srakocic)

Fortunes can change in football very quickly; just ask Pittsburgh running back Darrin Hall. Less than a month ago, Hall was a forgotten running back on a team going seemingly nowhere. Fast-forward to now, though, and the game has changed.

In the first seven games of Pitt’s season, the Panthers went 2-5; in those seven contests, Hall carried the ball just 31 times for 108 yards and one touchdown. 13 of those carries came in the team’s season opener against Youngstown State.

Over the last two weeks, though, there hasn’t been a better ball-carrier in the ACC. Hall ran wild in the team’s season-saving win at Duke: 24 carries for 254 yards and three touchdowns.

The following week, back home against Virginia, Hall carried the ball 25 times — a career-high — for 111 yards and another score. The result: another win, too.

Dig a little deeper, and Darrin Hall’s numbers pop a little more. Hall, who is yet to lose a fumble this season, has an Opportunity Rate of 38.5 percent, according to Football Study Hall. This means on 38.5 percent of his carries Hall’s collecting at least five yards. That means he’s getting decent production from his offensive line, too.

Furthermore, Hall is averages 6.8 Highlight Yards per Opportunity — the best on Pitt’s roster of players with at least 25 carries. Hall has found a groove in the open field; on plays when his offensive line does its job, Hall is averaging an additional 6.8 yards per carry. That’s rather productive.

For comparison: NC State’s Nyheim Hines, one of the league’s most allusive players, averages 6.5 Highlight Yards per Opportunity.

Hall’s Highlight Yards average is boosted by two long runs, one of 79 and another of 92 yards, against Duke — one of the league’s better run defenses. That performance earned him ACC Offensive Back of the Week honors. The 92-yard run set a record for the longest touchdown run in the history of Pitt football.

The 254 yards Hall posted on the ground against Duke rank 10th all-time for a single game performance in program history, tying Craig Hayward. Heisman Trophy Winner and Pro Football Hall of Fame back Tony Dorsett holds that record — 303 yards back in 1975 against Notre Dame.

Virginia Tech sets the tone for Miami with performance against Duke